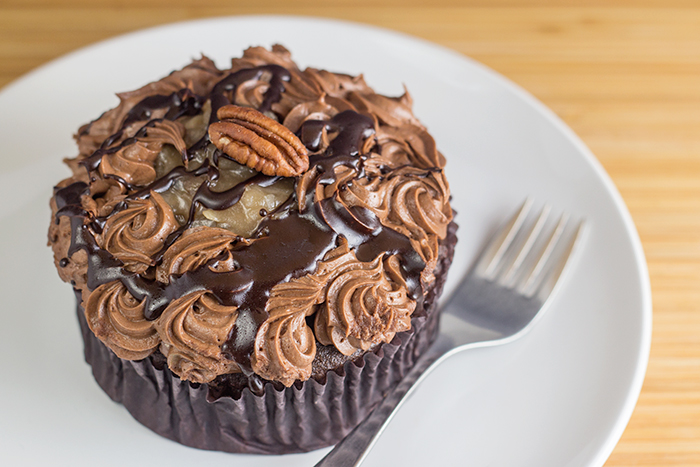 I cheated. This is a store bought German Chocolate Cupcake.

I’m pretty sure some of you already know that German Chocolate Cake has nothing to do with Germany or German food. If you didn’t, well, now you do. In this post I wish in no way to demean the deliciousness that is German Chocolate Cake. Really, I don’t. I simply wish to set the record straight – it’s 100% an American thing. Especially since it has all those pecans.

I’m certainly not the only person to have written a post about this. However, I felt it needed to be said here too. I’m tired of folks suggesting that I make a German Chocolate Cake post for my blog. I’m equally as tired of continuously seeing German Chocolate Cake recipes posted under people’s German Recipe boards on Pinterest. Also, because I’m a self-proclaimed “Miss Correct-y Pants”.

The History behind German Chocolate Cake

I get it. The name makes it totally confusing. Would it make more sense if I told you it was originally called “German’s Chocolate Cake”?

Yup, that’s right. It was named after someone with the last name German – an English-American chocolate maker named Samuel German. In 1852, he developed a sweet baking dark chocolate bar for Baker’s Chocolate Co. and it was named “Baker’s German’s Sweet Chocolate” in his honour. It’s still around over 150 years later and still labeled exactly like that. 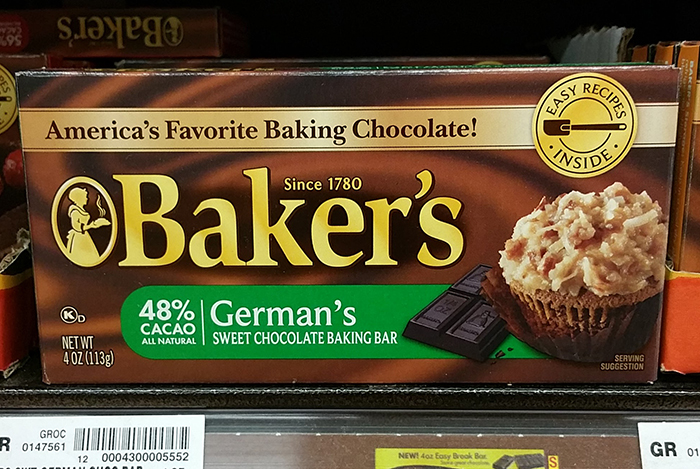 The recipe for a chocolate cake using that sweet chocolate baking bar by Mr. German first appeared in the Dallas Morning News in 1957. It was submitted by Mrs. Clay, a Texas homemaker, for the “Recipe of the Day” series. Baker’s parent company at the time, General Mills, took noticed and made sure the recipe was distributed to other newspapers around the country. They also included it on the German’s Sweet Chocolate Baking Bar boxes. It quickly became very popular. It’s said that sales for the chocolate increased by 73% during that time. That’s no small amount! Somewhere along the line the possessive form of “German’s” was lost and that’s where the confusion was created.

If you want a more in depth history of the cake, check out this post from Yesterdish.  You’ll get to see some original newspaper posts with similar recipes, plus an old version of the original. Anyone else love reading old, sometimes forgotten, recipes? 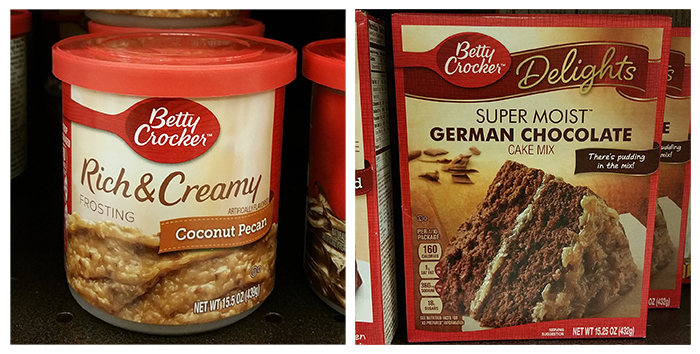 Could have made a cake for the blog this way but I was lazy.

What is a Chocolate Cake that’s German?

That’s a rather tough question. There doesn’t seem to be a quintessential chocolate cake that’s considered to be “German” in Germany. At least not in the way how in North American we have a pretty clear definition on what chocolate cake should be (super moist cake with chocolate frosting either as a layer cake or a sheet cake). Also not in the way a Sacher Torte is Austria’s chocolate cake pride and joy. When I asked a few German friends of mine the help me out with this, they couldn’t really come up with anything either. Consensus was perhaps a chocolate pound cake with a chocolate glaze.

Here are some chocolate cake recipes that would be considered to be more “German” by Germans. I asked. Some of these recipes are in German because I’ve had a hard time finding recipe in English that don’t end up with German Chocolate Cake in there somehow. Or, I simply don’t know the correct translation into English.

Sorry there was no recipe in this post. Next week I’ll be bringing you my version of a chocolate cherry pound cake as an extra post this month. This was really just the prelude to that!

If you think I missed an authentic or traditional chocolate cake (Schokoladenkuchen) recipe that’s German, share it with me in the comments below.

See you next week!