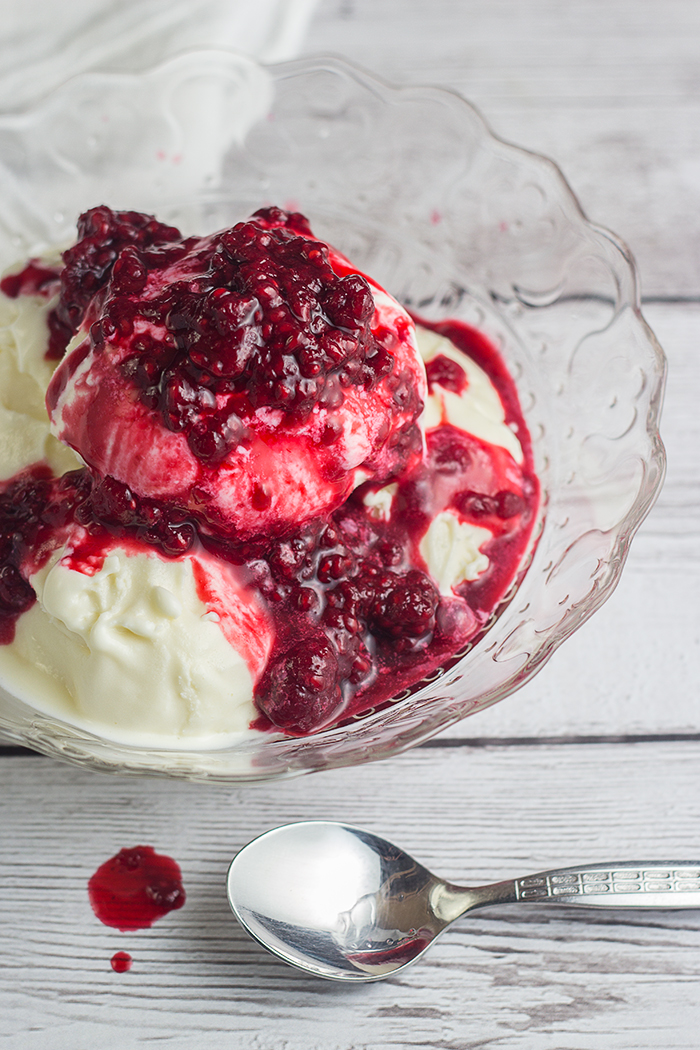 Hot raspberry sauce over vanilla ice cream is a true classic combination in German cooking. It’s a simple, yet company-worthy, dessert that I can pretty much guarantee will leave you wanting more (well, if you like raspberries anyway). Sometimes we need simple after we’ve just spent several weeks with lots of baking, cooking and preparing for the holidays. It’s the juxtaposition of both hot and cold that makes it a perfect treat to bring a little summer to the winter months. Really, though, it’s good all year round.

Even if you’re not a huge fan of vanilla ice cream (that would be me), the hot raspberries transform and elevate the humble flavour into a heavenly delight for your taste buds. Even more so of you top it off with a lightly sweetened whipped cream.

When I was young, this was the dessert my Mother frequently served when we had company over for dinner. It made having to sit through sometimes less-than-interesting adult conversations oh-so-worth it. I always hoped to get the sauce passed to me in the beginning instead of last because I wanted to ladle out as much of just the hot raspberry juice as possible without having to get any of the raspberry chunks or seeds. Chunky fruit bits weren’t my favourite back then but I love it just as much now.

My Mother doesn’t follow measurements when she makes her hot raspberry sauce. Believe me, I tried to get her to nail it down for me but she prefers to just make it by taste. And honestly, it’s a great recipe for that. Even the alcohol type is forgiving. She will use red wine, vodka or really whatever she has on hand that makes sense to her.

Though it is made with a shot of alcohol, I still find it appropriate for children but I’ll leave that decision up to you parents out there. German parents just aren’t as strict when it comes to having a little alcohol cooked in food and that’s certainly how I grew up. Obviously! 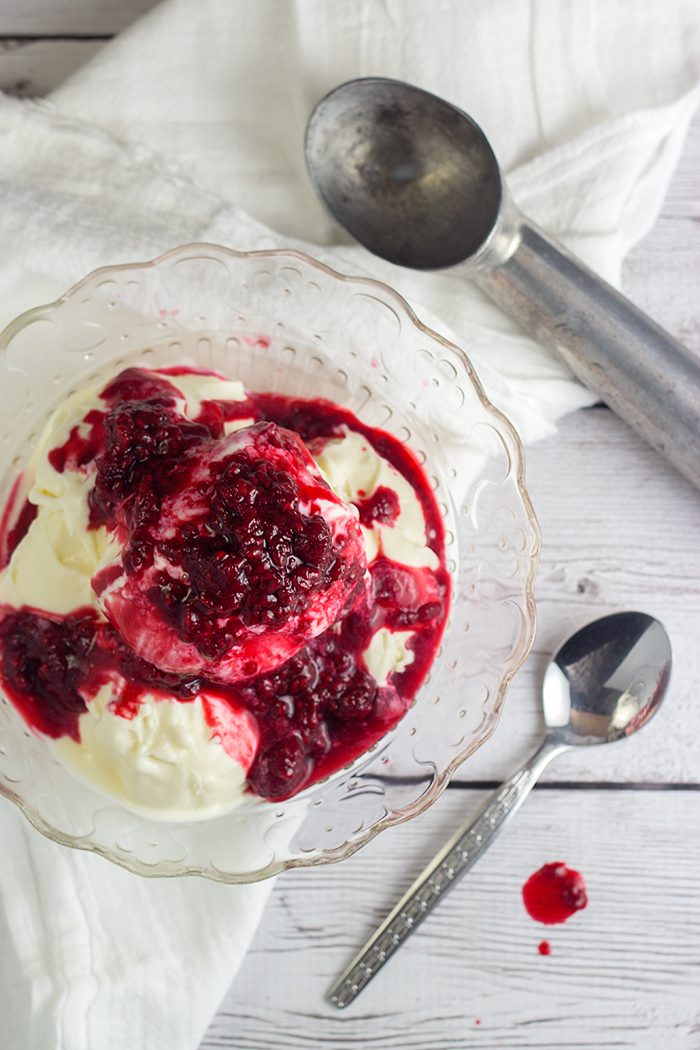 While I’m giving you measured out amounts, it’s really more about heating raspberries in a small pot, sweetening it to taste and adding some alcohol if you feel like it.

Traditionally, if you made this with alcohol, it would be made with a shot of Himbeergeist (translation “raspberry spirits”) or a German raspberry Schnapps. Keep in mind that German Schnapps is different from American schnapps in that it just refers to any kind of strong fruit or spice flavoured alcohol, like a fruit brandy. American schnapps is a heavily sweetened liqueur and those work for sauce too, as does vodka or a red wine. When I use red wine, I use 1/8 cup or 2 tablespoons.

If you wanted a thicker sauce, you can add a little cornstarch while it’s boiling. I would start with no more than a teaspoon.

I only ever make this with frozen raspberries but fresh should work here too.

You can make this with blackberries too. 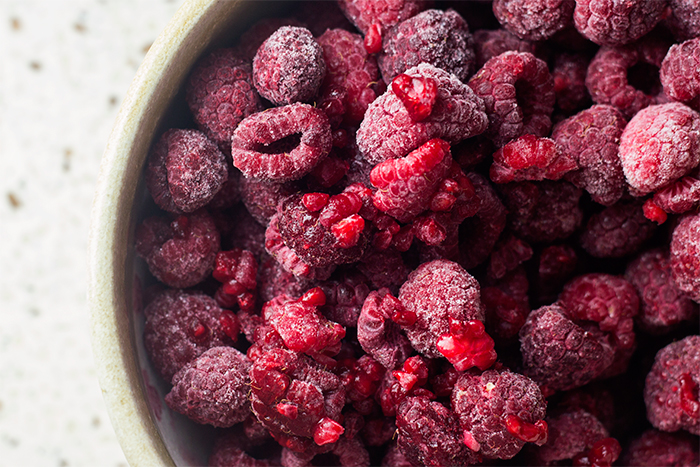 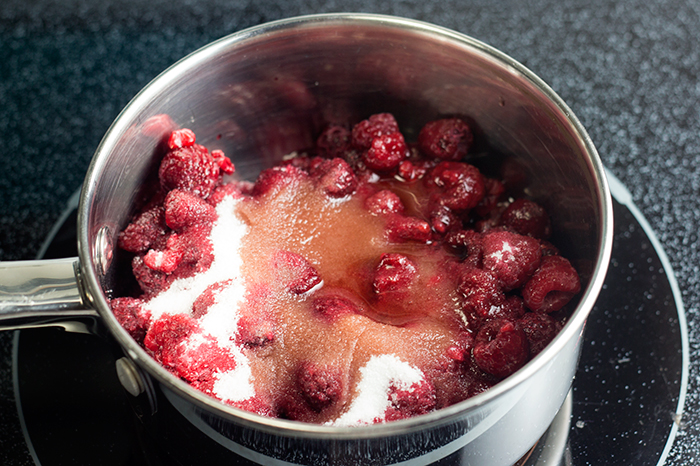 Once thawed, place into a small pot with the sugar and liqueur (if using) and bring to a low boil on medium heat. Don’t mix unless you want to break down the raspberries even more than they already will on their own. 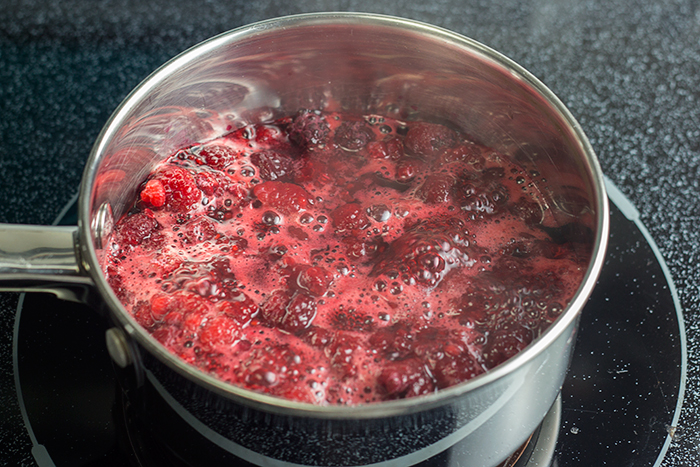 Boil for 2 – 3 minutes and adjust the sauce to suit our tastes, if needed. Just don’t boil it too long you’ll cook off a lot of the juice. 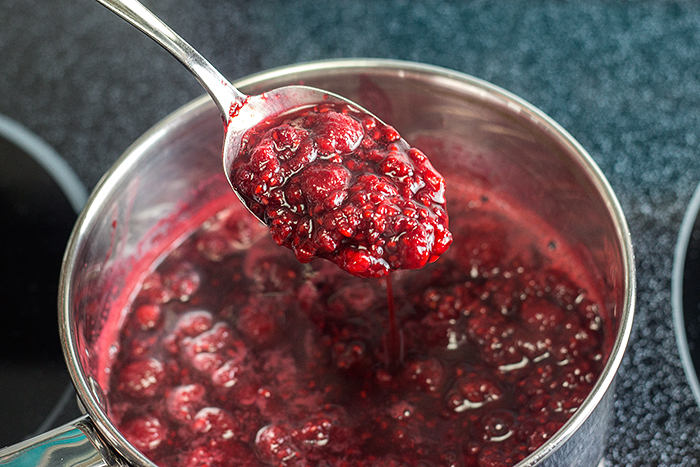 This is the consistency we want. Let it cool down just a bit before serving over vanilla ice cream. 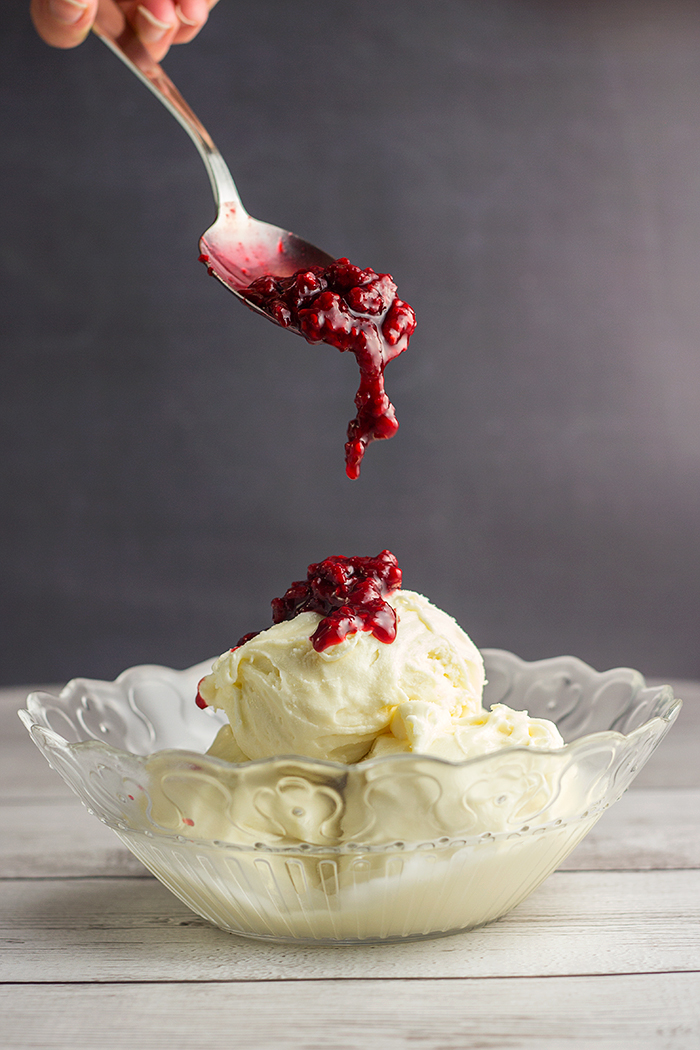 Yes, it really is that easy the make. 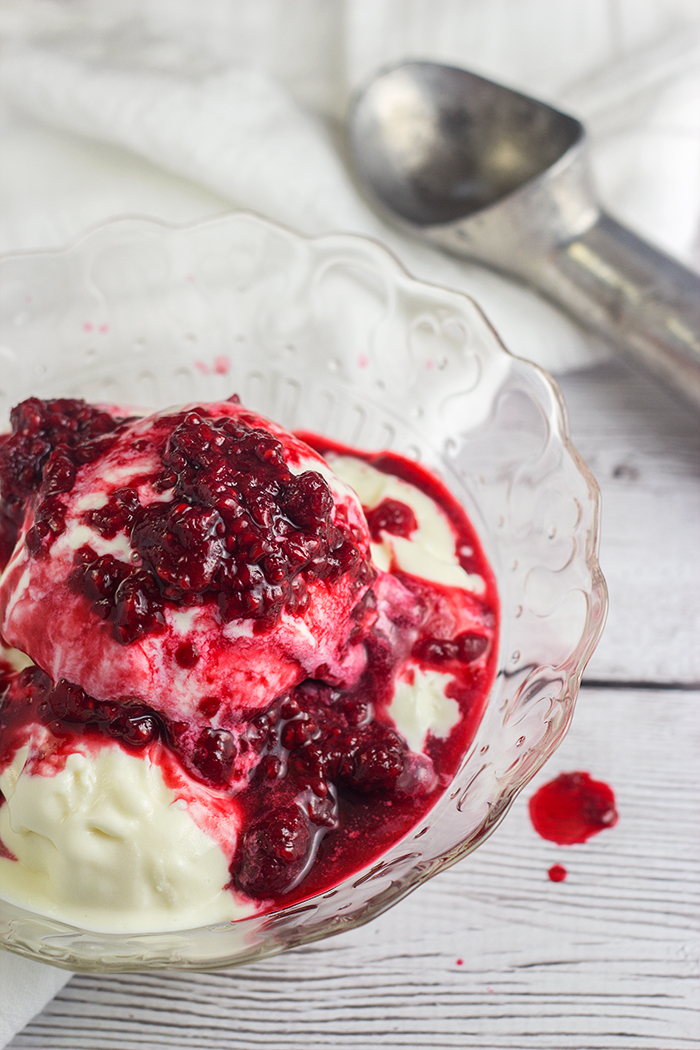 You can serve it two ways – either pour if over the ice cream and serve it immediately. Or, serve the ice cream and let folks pour the sauce on themselves. In my family, we always do it in latter way. Helps if you have one of those fancy little gravy boats with a fancy ladle. I think I’ll need to look for one of those sometime soon so I can serve this to dinner guests one day. First, though, we need to have people over for dinner.

Oh man, we have hot raspberry sauce for days now. My husband prefers it served cold over his ice cream, so it works that way too. For me, it definitely needs to be hot. The raspberry flavour is just so much bolder. 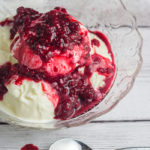 This sauce over vanilla ice cream is a true German classic. It's a simple, company-worthy dessert that brings a taste of summer to the winter months.
Prep Time 30 minutes
Cook Time 5 minutes
Total Time 35 minutes
Author The Kitchen Maus

German Himbeergeist is the tradition alcohol for this but a raspberry liqueur, vodka or red wine works as well.
For a thicker sauce, add a small amount of cornstarch while it's boiling.
You can use blackberries for this sauce too.