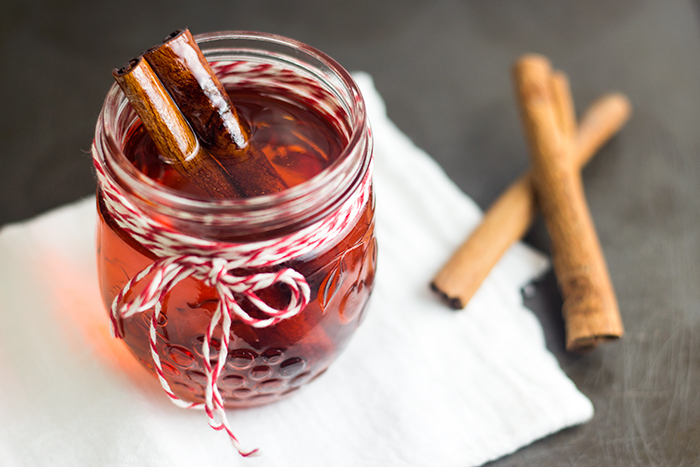 Oooh, it’s the time of year again when cinnamon becomes popular. Normally, I’m not much of a cinnamon girl but this year I’ve been craving it something fierce. Cinnamon oatmeal and cinnamon waffles are all I’m having for breakfast right now. When I came across this cinnamon caramel syrup in one of my many cookbooks, I just had to try it out.

In Germany, I find that cinnamon is more associated with Christmas flavours and aromas. So, technically this would be more appropriate around the Christmas holidays in German cooking. In North American, we all know that when autumn hits, if it’s not pumpkin flavoured, it’s going to be cinnamon or apple cinnamon. Caramel is in there too, especially when combined with apples. Either way, since I live in both worlds, I’ll be enjoying it now, thank you very much!

There are so many ways to use this delicious cinnamon caramel syrup. For something with a German flair, try it drizzled over rice pudding, griessbrei, walnut ice cream or spooned into hot chocolate. For something with a more North American style, how about over vanilla ice cream, oatmeal, pancakes, waffles, French toast or a slice of apple pie. And of course, we can’t forget the coffee drinks. 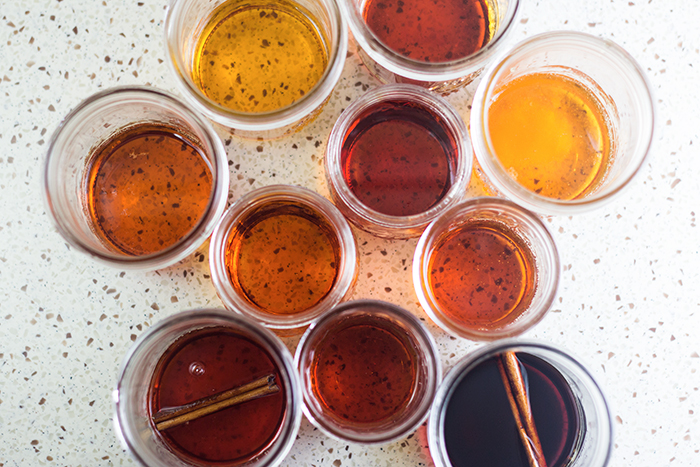 I’m not going to lie, this recipe is a tricky one. At least it has been for me as it’s my first foray into making caramel syrup from scratch. It requires patience and a watchful eye. That’s why I’m showing you something I normally wouldn’t – all my mistakes and attempts to try to get this syrup to a beautiful, thick but still easy-to-pour consistency.

I ended up learning a lot about wet and dry caramelization (I tried both) through all of this, but most of the recipe still comes down to look and feel for me as I couldn’t seem to get consistent results with just timing it. I’ve ended up deciding that a little thinner is better than a little thicker. But, as long as it’s not rock hard (that happened to me three times), it’s always still usable. Heating in the microwave does wonders. The only time it’s not usable at all is when it’s black (bottom right). No matter what the consistency is like or how good the cinnamon makes it smell, black means completely bitter. 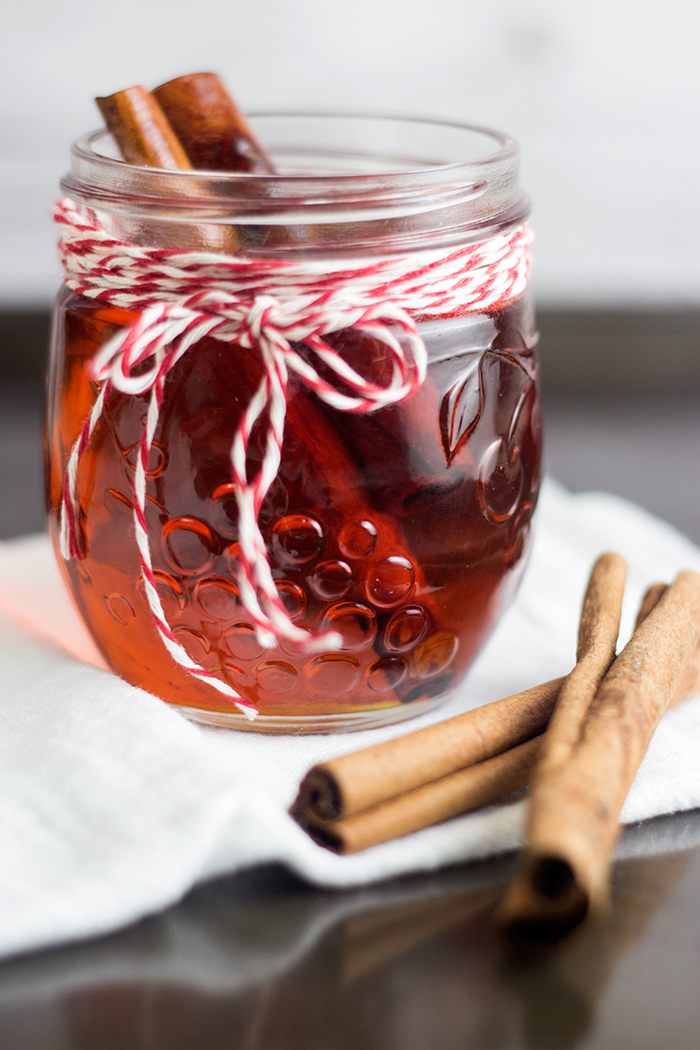 The syrup thickens as it cools, so don’t let it cook too long or else you’ll end up with rock hard candy in a jar. It should still be fairly liquid (like heated maple syrup) when you’re done but coat the spoon ever so slightly.

I do not worry about any sugar clumps that end up on my metal spoon. Most of the time they dissolve in the cooking processes. If they do not, they come off easily enough with hot water and friction from your fingers.

Be sure to store the used cinnamon sticks with your syrup. It will help deepen the flavour. 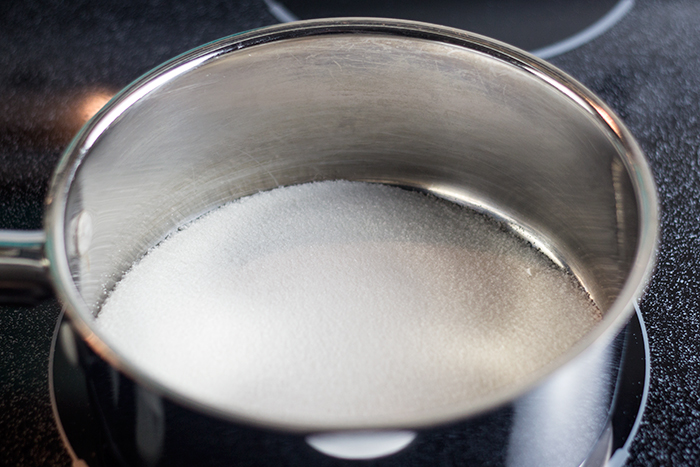 We start off with by heating your pot on medium heat. Let it become nice and hot before you add your cup of sugar. 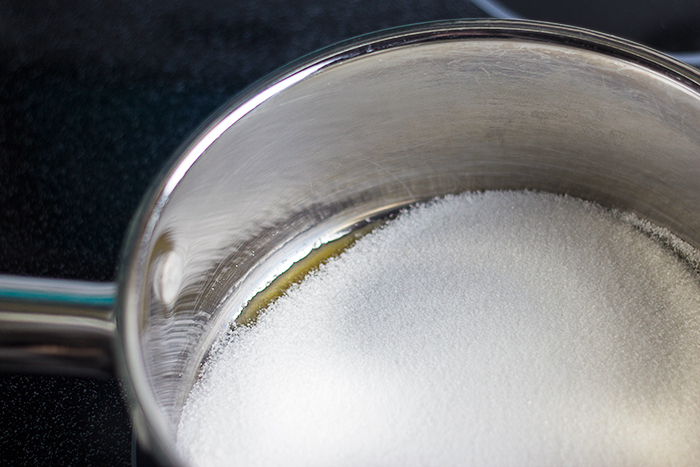 The sugar should quickly start to melt. I look for a “wetness” to start on the edges before my first stir but don’t wait too long to stir or it might burn. 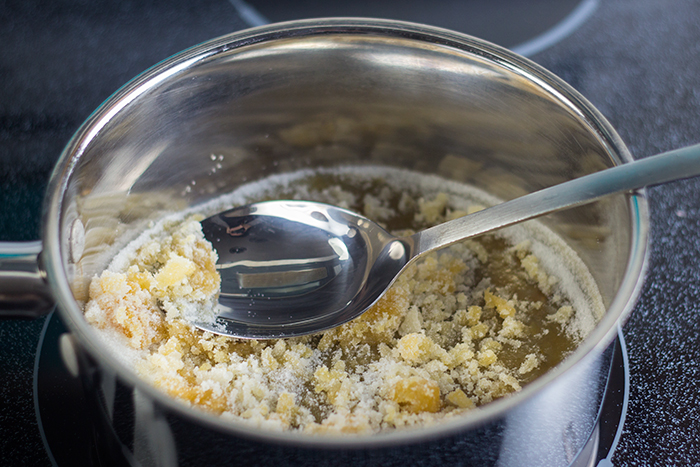 The initial stir is a way to judge how well the sugar is caramelizing. Ultimately, this part of the process is all about looking for that amber or caramel brown colour instead of worrying about timing. 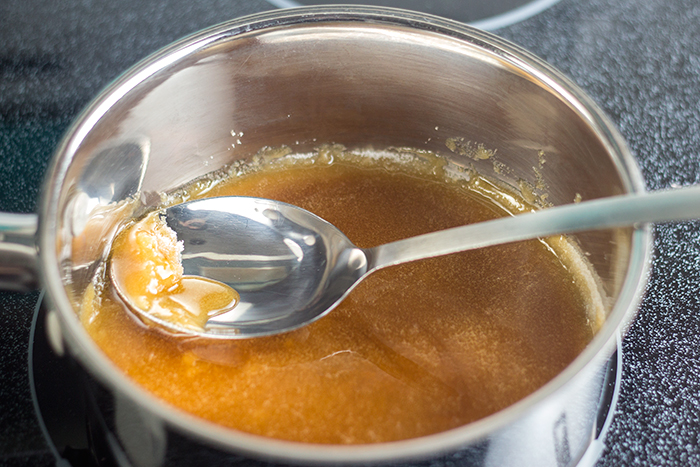 When the sugar chunks have mostly melted and it’s a deep golden brown, that’s when I know it’s ready for the next step. Expect the melted sugar to be fairly cloudy or opaque. 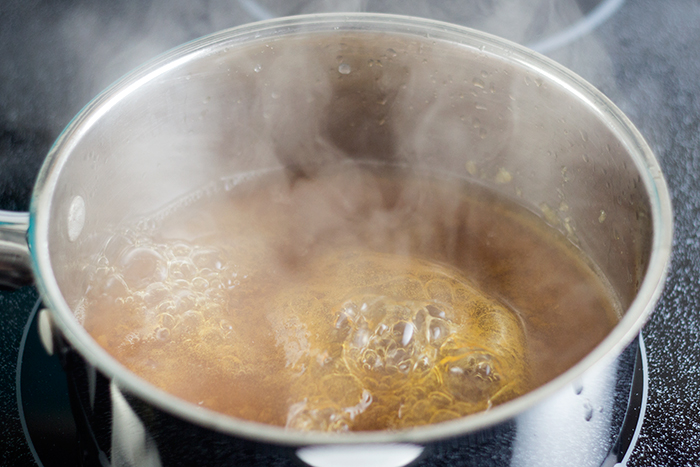 Now, here’s a tricky part. Carefully pour in your cup of water. It will bubble, splatter and hiss at you, so if you have a metal splatter screen, use it. The sugar will seize up and harden. It might even rise up out of the water like a mini erupting sugar volcano. 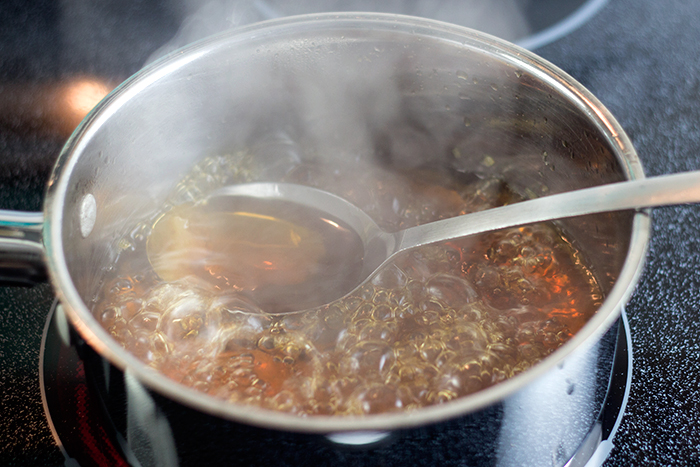 Turn the heat up to high and bring the liquid to a nice rolling boil. The sugar is extremely sticky at this point, so expect it to stick to your spoon. I’ve tried working this recipe using a metal spoon, wooden spoon and silicone spatula. The metal spoon is simply the easiest to clean, in my opinion.

Stir the boiling liquid until all the sugar has come off from the bottom of the pan. Don’t worry if there’s still sections or chunks of sugar coating the edges of the pan. They will dissolve as the caramel simmers in the next step. 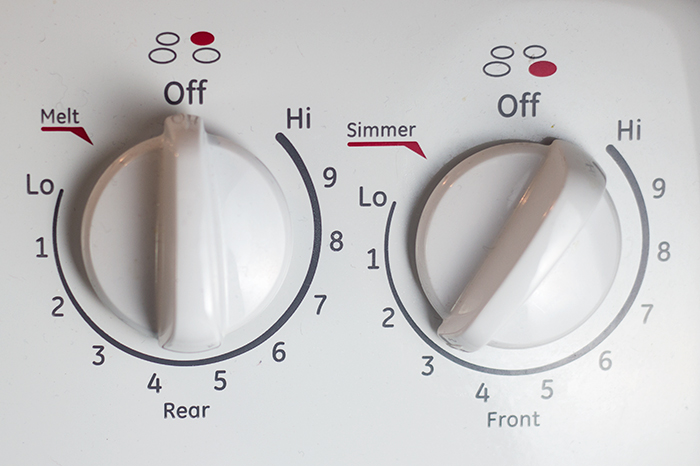 Bring the temperature down to a medium low that’s more towards medium than low. Everyone’s stove top dials will be different. If this is helpful at all, mine range from Lo, 1 – 9 and High. I put it at a 3. 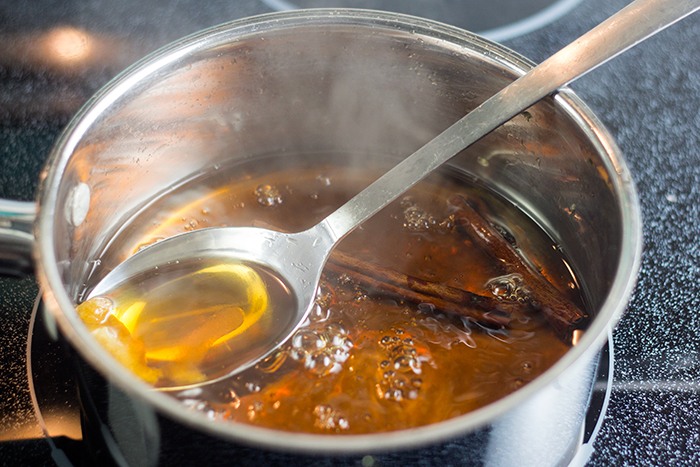 It’s also time to add the two cinnamon sticks. Cook at a low boil for 9 – 11 minutes.

I always start with 9 minutes and then add time accordingly. We’re looking for the bubbles to be more “foamy” instead of just large, clear bubbles. This usually happens within the last 4 minutes or so. 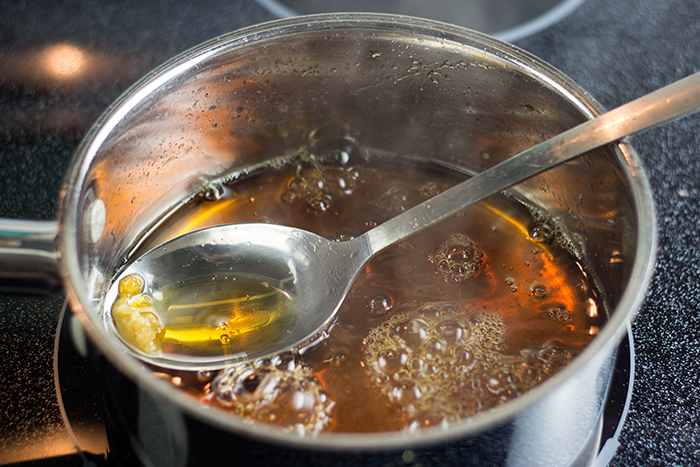 Patiently watch the liquid and stir frequently. We need foamy bubbles. We also want small bubbles lining the edge of the liquid against the pot and the consistency to be liquid but coating the spoon ever so slightly.

If you see none of that, let it cook longer 30 seconds to one minute time increments. It becomes thick quickly. If the liquid coats the spoon like a store bought pancake syrup or honey viscosity, you’ve gone too far. 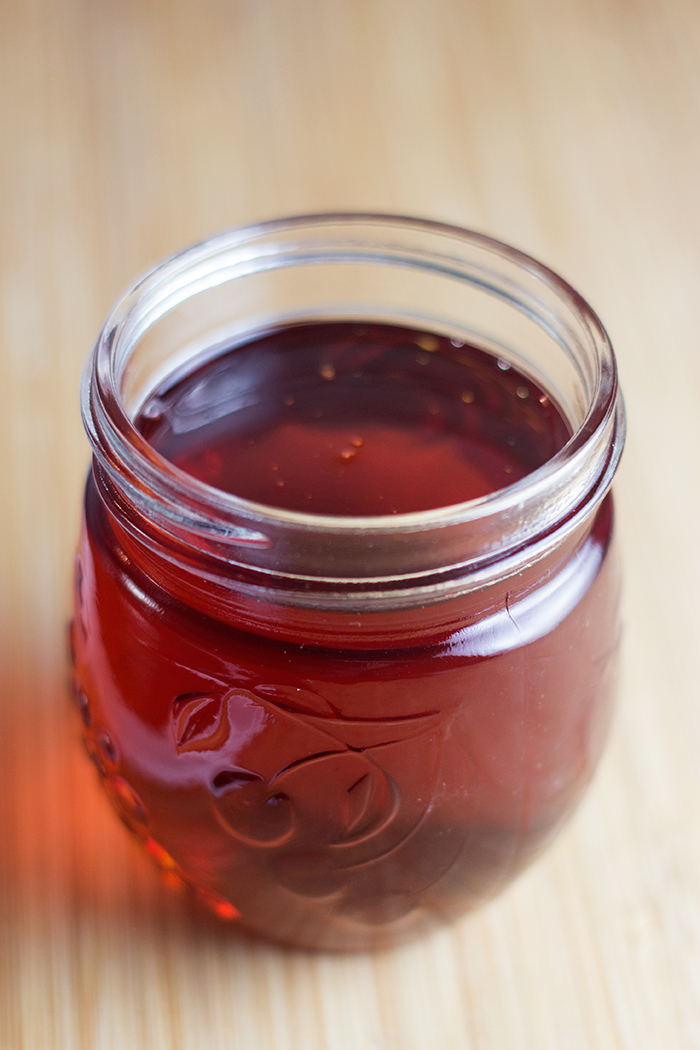 Pour the finished syrup into your clean bottle or jar. Close tightly once it’s cooled. It will keep for at least 3 – 4 months. 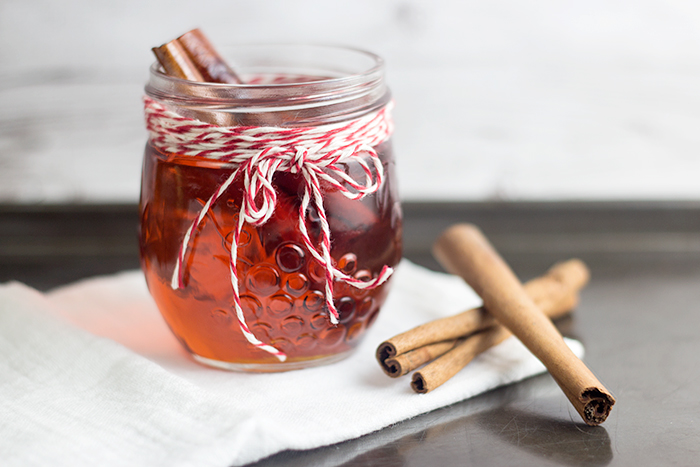 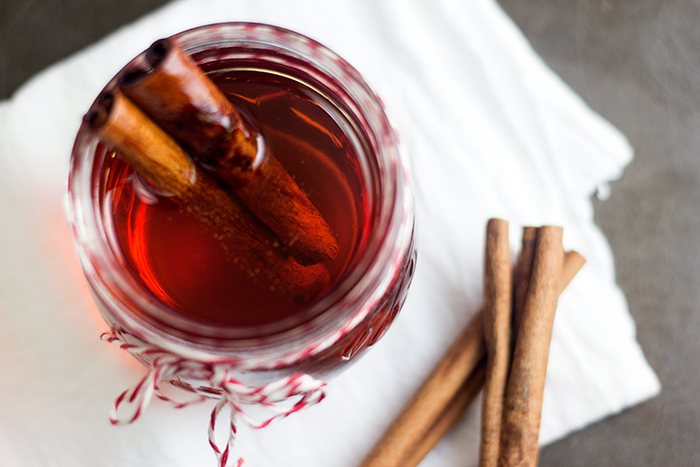 There you have it – A beautiful, deep amber cinnamon caramel syrup! It just smells so good.

As I mentioned earlier, there as so many ways you can enjoy this that I don’t even think I could list them all. Here are some of my recipes that I think would be a perfect fit for this. 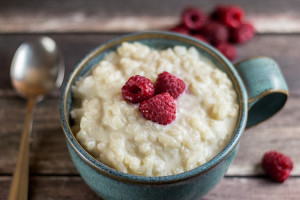 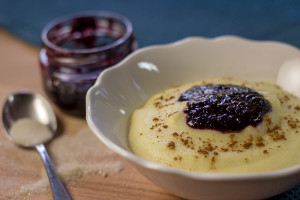 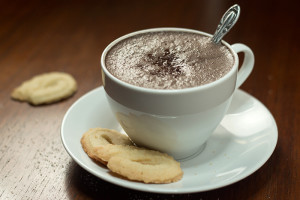 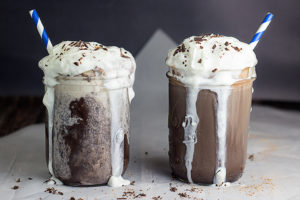 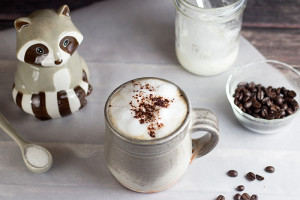 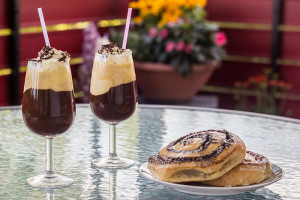 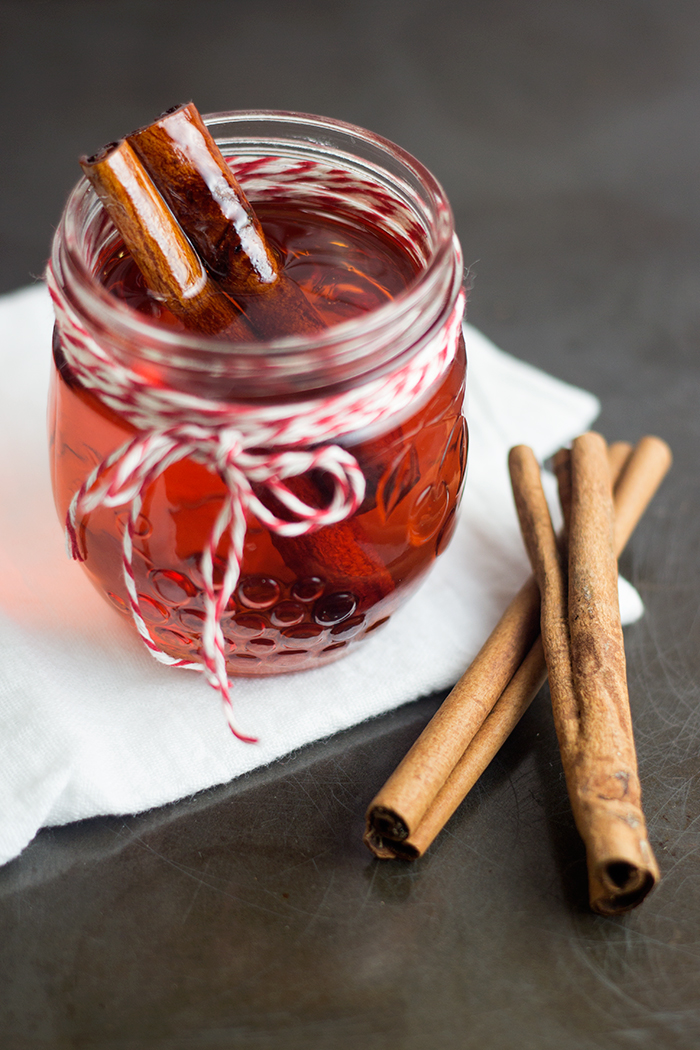 Share with me your experiences on making this cinnamon caramel syrup or any sugar syrups from scratch in the comments below. I’m always looking to improve my recipes, so if you know something I don’t, I’d love to hear about it. 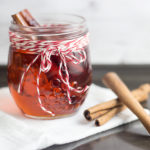 Syrup thickens as it cools, so don’t let it cook too long or else you’ll end up with rock hard candy in a jar. It should still be fairly liquid (like heated maple syrup) when you’re done but coat the spoon ever so slightly.
Be sure to store the used cinnamon sticks with your syrup. It will help deepen the flavour.