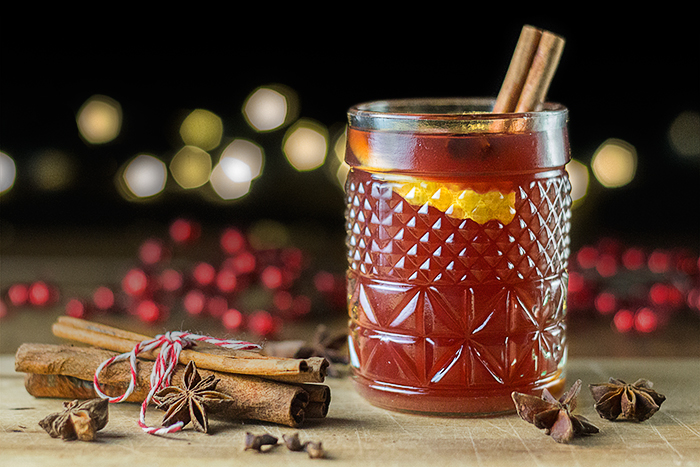 The holidays are here again and it’s time for another German Christmas drink recipe. The past two years I’ve posted on mulled, alcoholic drinks, like Glühwein and Glühmost, that are classics at German Christmas Markets. This year I’m doing a non-alcoholic version also found at Christmas Markets known as Kinderpunsch. It literally translates to “Children’s Punch” but it’s not just for kids. It’s a wonderful concoction of herbal tea, fruit juices and spices for anyone who doesn’t feel like something alcoholic but still wants the warm spiciness of a hot, mulled drink in their hands on a cold winter’s day.

Making Kinderpunsch reminds me that it’s going to St. Nicholas Day (Nikolaustag) in Germany soon. Traditionally, on the evening of December 5th, children around the country will be putting out their boots or shoes waiting for St. Nicholas to drop by and fill them with treats, like candy, chocolate, oranges and nuts. That’s only if you were good, of course. If you were bad, you might find lumps of coal, or even a tree switch (in decades past) for your parents to use to discipline you. The latter things were brought by St. Nick’s dark traveling companion. In Franconia, that companion was Knecht Ruprecht, a bearded man in a long, hooded brown or black robe with rope or chains around his waist. He carried tree switches and a large burlap sack that he threatened to stuff children into had misbehaved.

Nowadays, I don’t really know what kids get in their get in their boots anymore, if it’s just the edible treats or also small gifts. I’m sure that parents don’t bother much with coal and switches, unless it’s for decoration or teasing. During my own childhood in Canada, I seem to remember getting something like a pair of pajamas once. We didn’t observe the holiday for very long because the boy next door cried when I excitedly told him about it one year. He was upset because St. Nicholas didn’t stop at his house too. My Mother didn’t know how to explain it to him so instead St. Nicholas just stopped coming to our house. I’m thinking about bringing this holiday back to our household when we have offspring of our own. 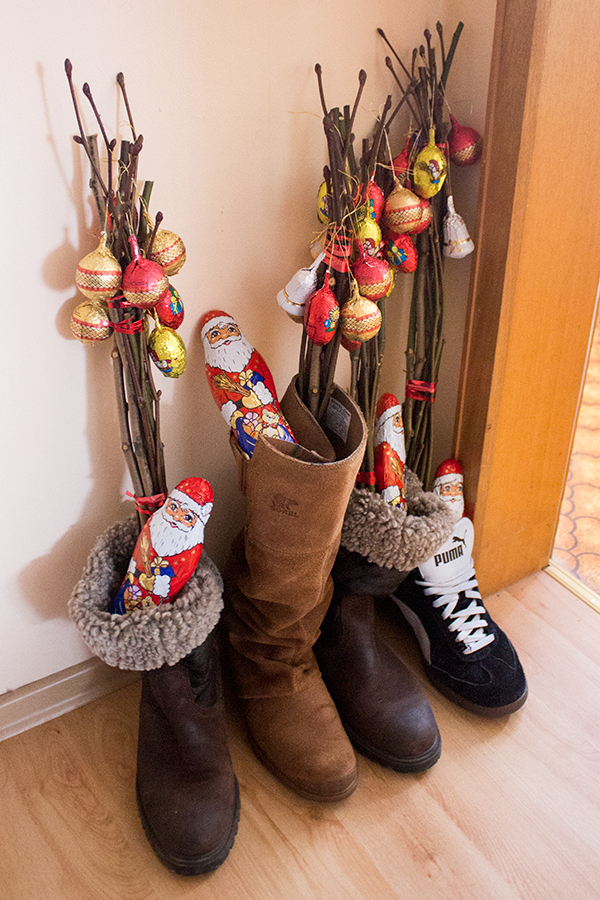 My Mother gave my brother, nephew, husband and I a late St. Nicholas Day last time we were in Germany for Christmas. We must have been very bad to get all those switches!

The whole deal of putting treats in footwear should be familiar to North Americans. That’s because Santa Claus and St. Nicholas are based on the same bishop from the 4th century that was known for his good deeds, one of which was putting coins in people’s shoes that were left out. Since I love to research and share what I’ve learned, there’s so much more detail I could go into about this German holiday, but that would take up many more paragraphs. I’ll let you do your own research if you’re interested. 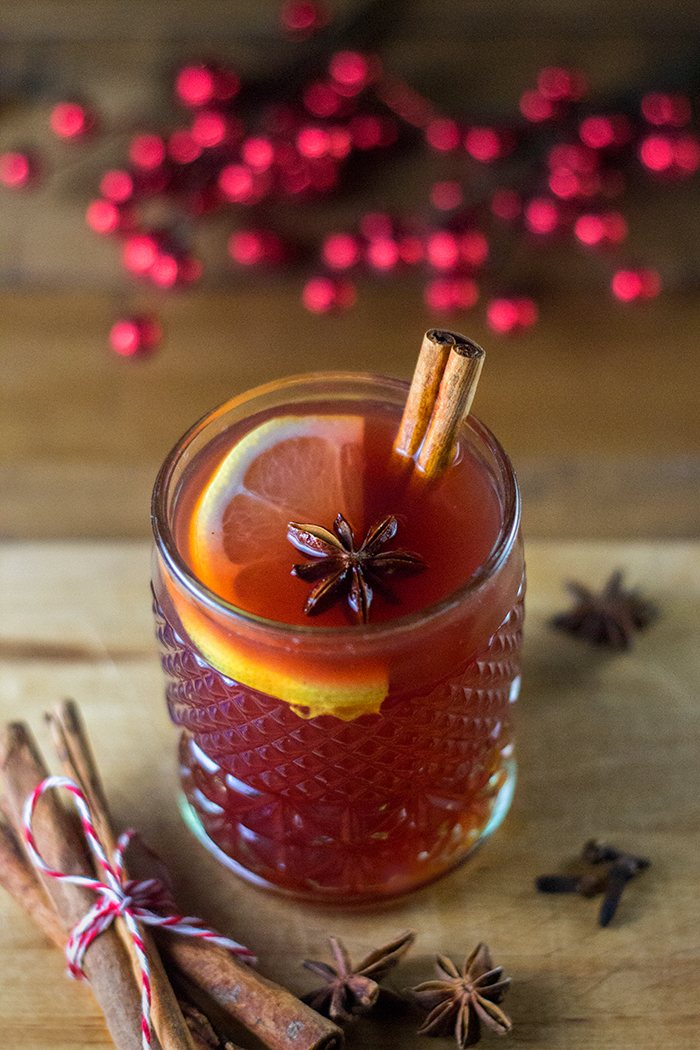 A star anise or two is a great addition to the spices.

We drink ours lightly sweetened with honey and use about 2 teaspoons – 1 tablespoon. Any sweetener, or even none at all, will do.

You can substitute any berry or fruit blend tea here as most of these teas already use hibiscus as a base. You can also use a berry blend black tea, if you’re wanting something with more of a “pick-me-up”.  If you’re really interested in trying out Hisbiscus Rosehip tea, most German or International stores carry it.

According to the internet, 1 cinnamon stick is equivalent to 1/2 teaspoon of ground cinnamon and 3 whole cloves are equal to 1/4 teaspoon of ground cloves. Swapping out ground for whole works. I tried it with the cinnamon. You just end up with a much cloudier drink and have to strain it through a fine sieve to remove as much as possible before consuming.

Let’s get started with our Kinderpunsch! 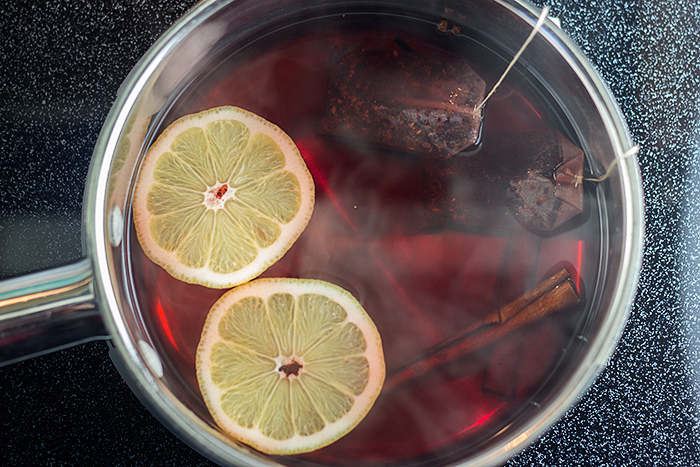 Bring 2 cups of water to boil in a medium sauce pan. Remove the pan from the heat and add the 2 tea bags, plus the spices and lemon slices.

Steep for the recommended time dictated by the type of tea you’re using. I always go with the maximum amount to get the strongest flavour, which is 8 minutes for the Hibscus Rosehip Tea. Remove the tea bags when done. 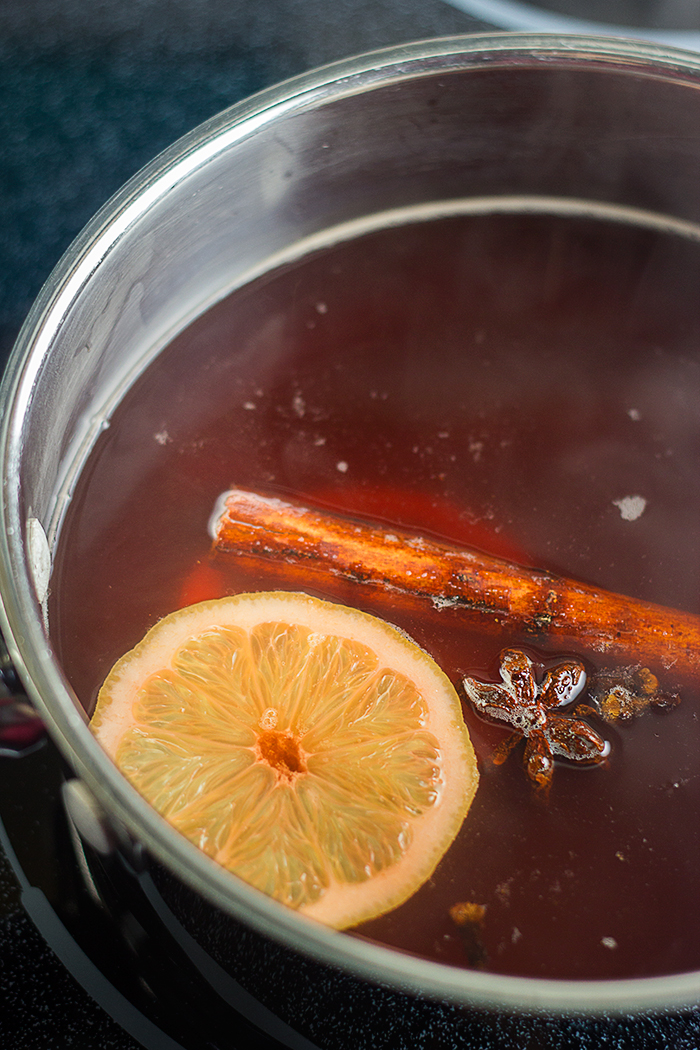 Add the applejuice, orange juice and the honey to the pot and return to the burner. Let it heat up on low – medium low heat. We don’t want there to be any active bubbles. We just want to heat the drink and really let the spices continue to steep. Plus, Kinderpunch tastes best when this is nice and warm.

Steep for 8 – 10 minutes. If you’re like me and really like the spices to come through, you can steep for about 20 minutes. 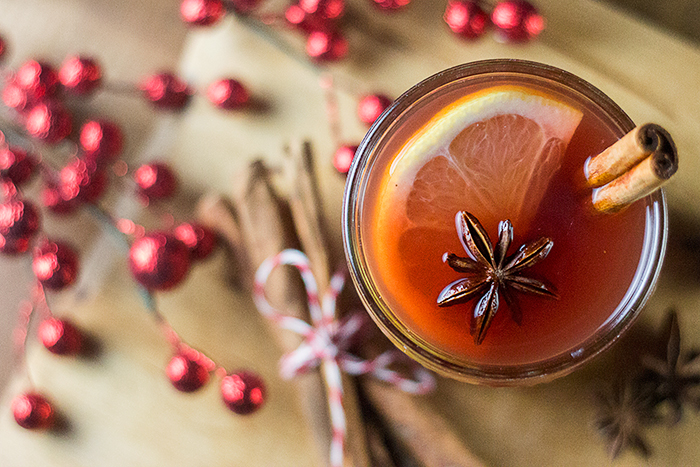 Ladel your Kinderpunsch into heat proof glasses or your favourite mugs.

If you’re feeling fancy, you can decorate with a lemon or orange slice, cinnamon stick or star anise. I got super fancy here with all 3, as you can see. 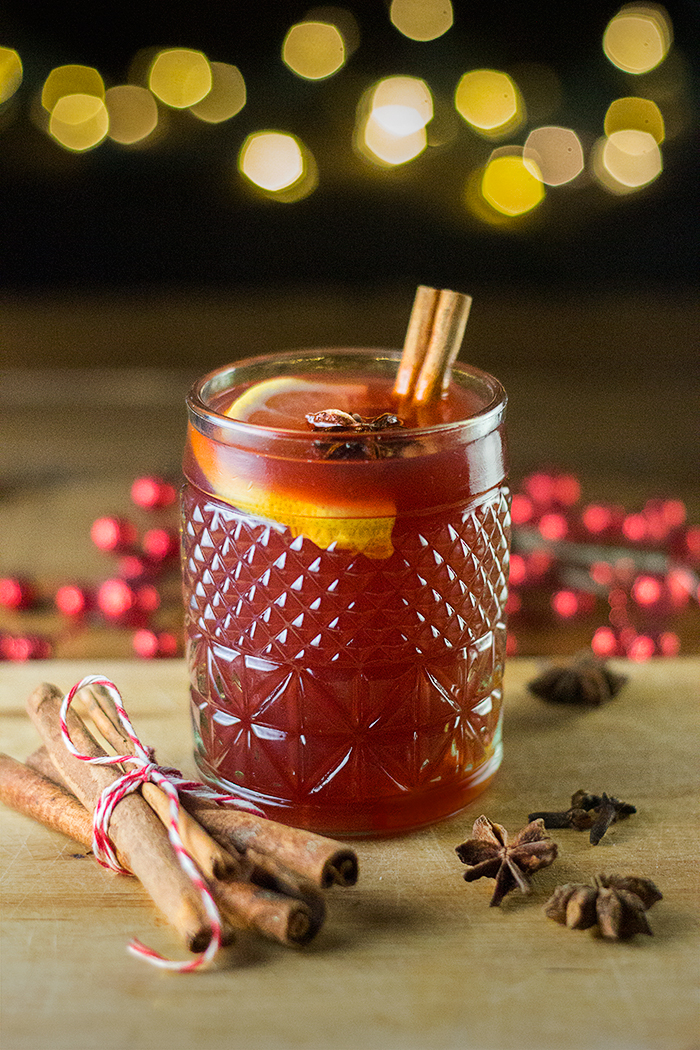 There’s my Kinderpunsch recipe that both my husband and I have been enjoying the past few day. I hope you enjoy it too!

Did you know that herbal teas aren’t technically  “tea” but instead a tisane? A tisane is an infusion of herbs, flowers, fruit and/or spices often used for medicinal purposes. While tea needs to use cured parts from the tea plant, or shrub, in order for it to be a proper tea.  Not like it really matters, since they both use hot or boiling water to create the drink. Just find it one of those random, interesting facts.

I would love to hear about your St. Nicholas experiences, if you have any, in the comment section below! 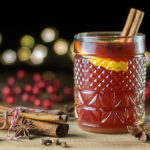 Warm your soul and hands with non-alcoholic mulled Kinderpunsch on a cold winter's day. Made with herbal tea, fruit juice and lots of spices.
Servings 2
Author The Kitchen Maus

A star anise or two is a great addition to the spices.
You can substitute any berry or fruit blend tea here as most of these teas already use hibiscus as a base. You can also use a berry blend black tea.
1 cinnamon stick is equivalent to 1/2 teaspoon of ground cinnamon and 3 whole cloves are equal to 1/4 teaspoon of ground cloves, swapping out ground for whole works. Just have to strain it through a fine sieve to remove as much as possible before consuming.

Disclosure: The Kitchen Maus may be compensated in exchange for your clicking on links posted within this page. It’s usually not much more than a few coins and it’s never for products that we don’t use personally.
Like it? Feel free to share it!