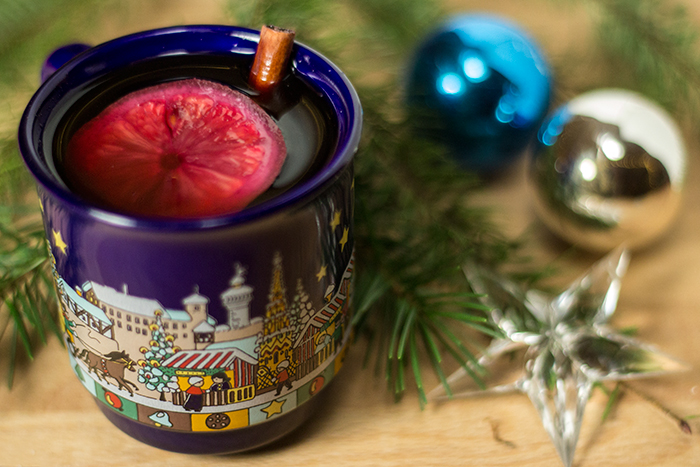 Oh, Glühwein. The perfect sipping drink for a cold and dark winter evenings.   It’s quite popular in Germany around the holidays and is always found at the open air Christmas Markets.  If I didn’t know better, I’d say the reason it’s called “glow wine” in German is because you have a tendency to make cheeks take on a rosy glow.  Actually, I’m pretty sure the name comes from the “mulling irons” that were originally used for heating wine.  Literally, an iron rod heated in the fireplace that was then stirred into your drink to heat it.  Likely it looked like similar to this video.

A mull is a beverage that’s heated with sugar and spices.  The two traditional spices for Glühwein are cinnamon sticks and whole cloves.  However, it’s not unheard of for folks to add star anise, juniper berries, nutmeg (whole or grated) and cardamon pods.  Some other spice options (though somewhat nontraditional) could be vanilla beans, bay leaves, ginger or allspice. Citrus is also always present, usually lemon, but you can also add or substitute orange.  For the sugar, you can use regular white, or give it a little different flavour profile by trying out brown sugar or honey.

The type of red wine you’ll want to use it basically up to you.  Traditionally, you’d use a dark, robust wine, like a Cabernet Sauvignon.  My rule of thumb would be to go with a type of red wine you already like to drink.  You can also use something a little less expensive, since you’ll be altering the flavour.  Hence why I tried out the recipe with Two Buck Chucks from Trader Joe’s – the Cab Sauv and Merlot.  We’re not big on robust red wine fans in my household, so we ended up liking the fruitier Merlot the best.

If you really want to give your Glühwein an extra kick, you can serve it “mit Schuss” or with a shot of liquor, like rum, kirschwasser or apple brandy.

On to the traditional Glühwein recipe!

A note on the lemon –  you can either slice it lengthwise into wedges or slice it crosswise.  When I’m just wanting the taste, I go for the former.  When I’m going more for looks, I go for the latter. Oranges can also be substituted or added to the lemon.

More sugar can be added to individual mugs to taste. Also, instead of regular sugar you can use honey. 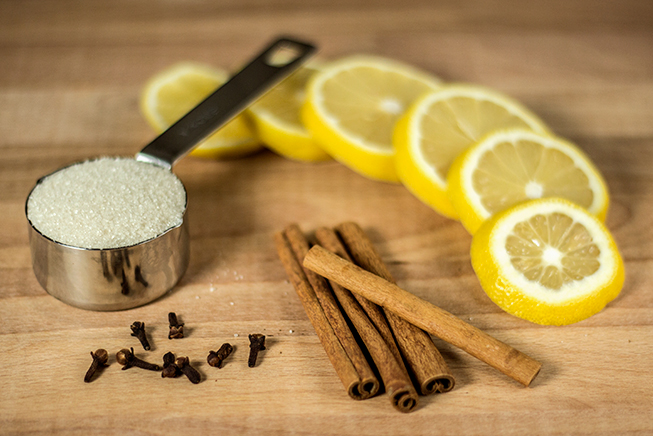 First, we gather all the ingredients that we’re going to add to the wine. 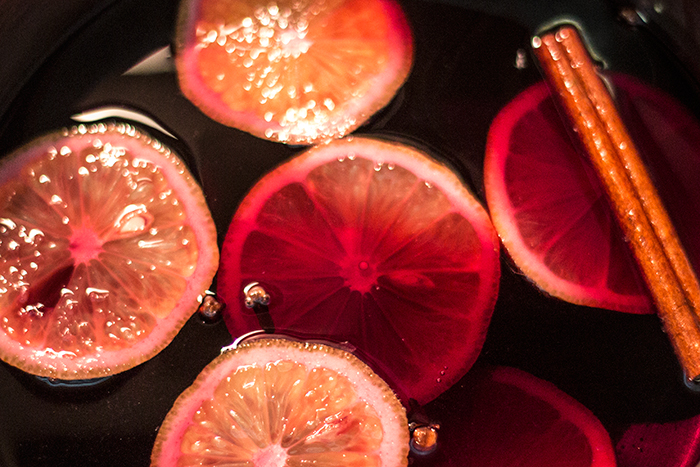 Next, we do is pour the wine into a medium sauce pan and then add all the ingredients. Set the burner to low and let the flavours blend.  Stir it once or twice to make sure the sugar is dissolved.

The most important thing to know about making a mulled wine is to make sure not to bring it to a boil, but instead you want to heat it low and slow.  If you boil it, you’ll be removing most of the alcohol and what fun would that be?

After about 15 minutes or so, take the pot off the burner and let it cool a little.  Ladle into mugs and then enjoy!

Oh, and if you really don’t want to get any cloves or lemon bits into your drink, you can just pour it through a strainer first. 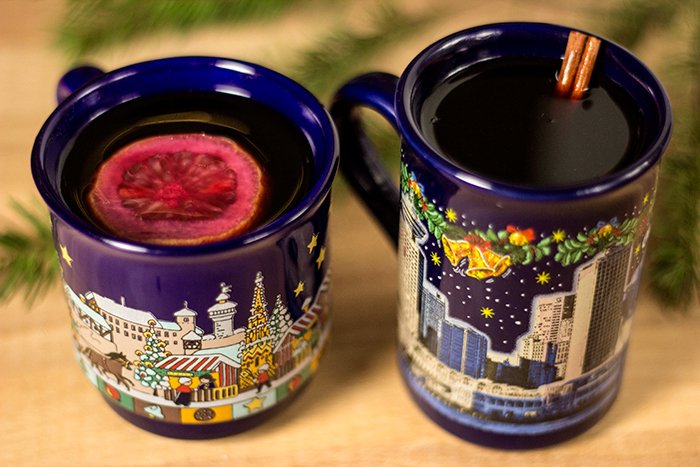 Oh, these blue mugs that are in the photo shoot?  They’re from the aforementioned Christmas Markets. Typically, when you buy a Glühwein there, you pay a little extra for a mug, like a deposit.  You can then get refills much cheaper.  Sometimes you can return the mugs to get your deposit back or you can just keep it as a souvenir.  Guess which one we like to do?

Let me tell you, making Glühwein make the house smell like Christmas. It’s worth making it just for that, in my opinion.  I hope the Glühwein brings a little bit of extra holiday cheer into your home! 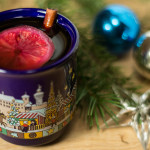 - More sugar can be added to individual mugs to taste.
- Instead of regular sugar you can use honey.
- Orange can be substituted or added to the lemon.
- Experiment with adding 2 juniper berries, a few gratings of nutmeg, 3 cardamon pods or 1 star anise.

Adapted from Best of German Cooking