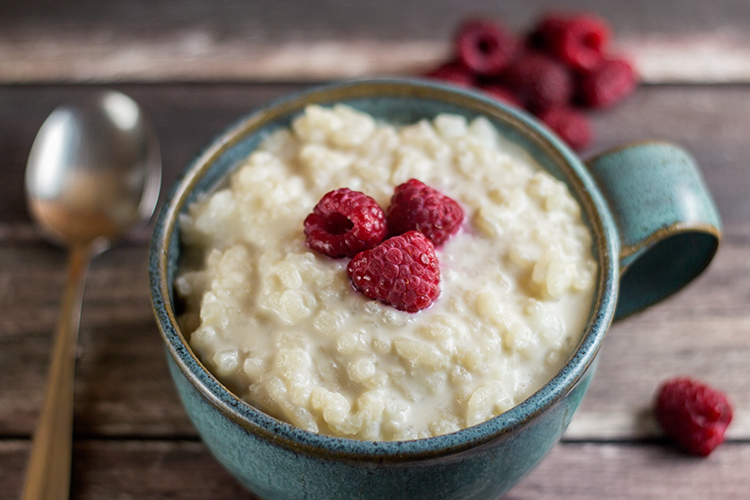 Rice pudding invokes a lot of warm childhood memories for many Germans and I’m no exception. This, along with Griessbrei or homemade pudding, would be one of those comforting dishes that your Oma would likely have made for you. To this day, I cannot smell cooking milk on the stove top without thinking of my Oma. I cannot hear the words, rice pudding, without thinking about one of my cousins and I sitting at my grandparents’ kitchen table shoveling this down with little spoons (and we both still have one of those spoons as a keepsake).

Depending on where you are in Germany, you’d refer to this little dish as Reisbrei (rice porridge), Milchreis (milk rice), or even Dicker Reis (fat rice). In case you’re wondering, it’s Reisbrei in Franconia. Overall, it’s thought of more of a “sweet meal”, rather than just a dessert and can easily be served as a light lunch, supper or even breakfast. It’s popular to top this with fresh fruit, rote Grütze (a sort of fruit pudding with fruit chucks), apple sauce or just more sugar and some cinnamon. 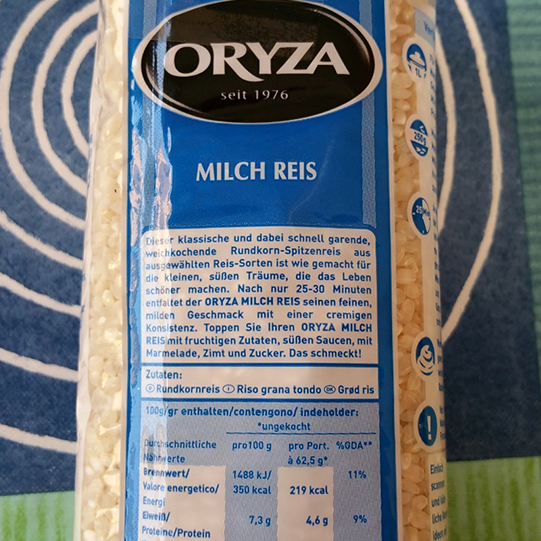 The weather has been very cool lately in the Northwest, so it’s been the perfect time to experiment with this recipe. I haven’t been able to 100% replicate the taste of rice pudding made in Germany. I believe that it comes down to the slight differences in ingredients. For example, in Germany you can flat out buy a grain called “Milchreis”. While it can have other uses, it’s a short-grain white rice (Rundkornreis) that’s specifically used for rice pudding. I’m using Arborio rice because it’s easier to find (I can be too lazy to look for what I need in more than 2 – 3 places) and it still works well. However, it’s not exactly the same as it’s medium-grain. Another difference I feel is in the milk. It just tastes different in Europe.

Regardless, just because it’s not an exact replica, doesn’t mean it’s not an awesome tasting recipe. It really is yum. 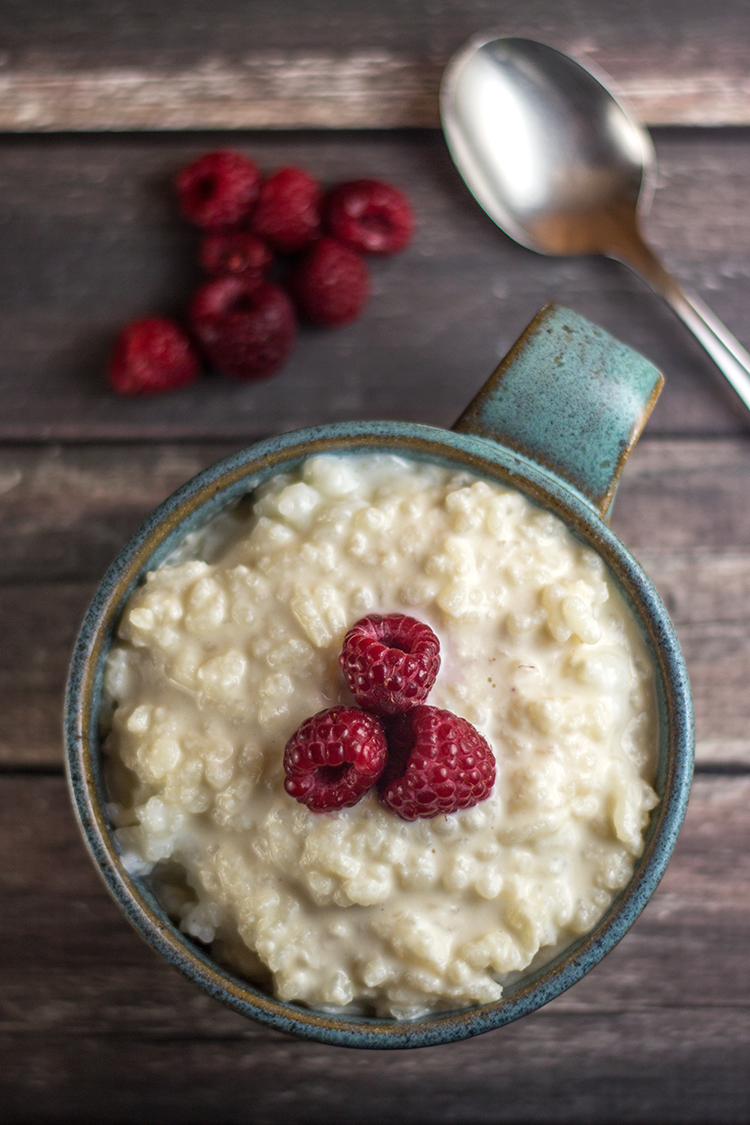 I’m calling this a simple rice pudding because it’s really not hard to make. However, it does take a certain amount of time and attention. Milk cooking on the stove top always does. It’s not the sort of dish you can just set to simmer and walk away. Make sure to give yourself the freedom to be able to come back to occasionally stir it.

A classic German rice pudding will have very little or no sugar in it. You’d just add how much you wanted afterwards. To follow modern rice pudding trend, I’m adding sugar to my recipe. If it’s still not enough for you, just sprinkle on more afterwards. 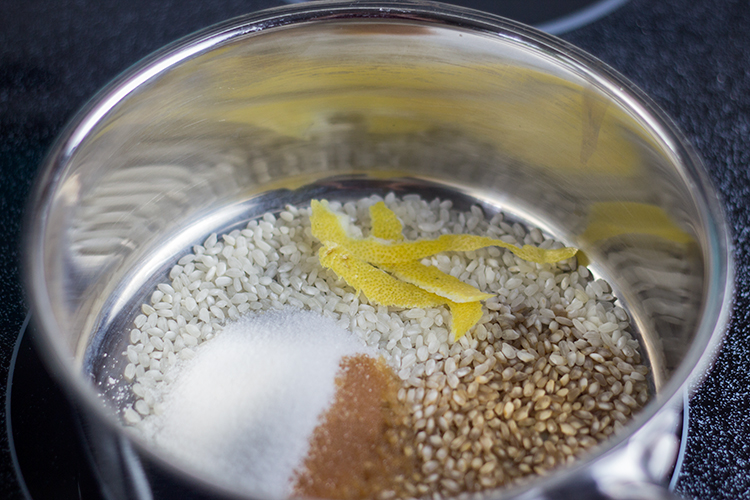 Yes, I put an extra piece of lemon peel in there for myself. Just shave the peel off your lemon with a vegetable peeler. Works really well. 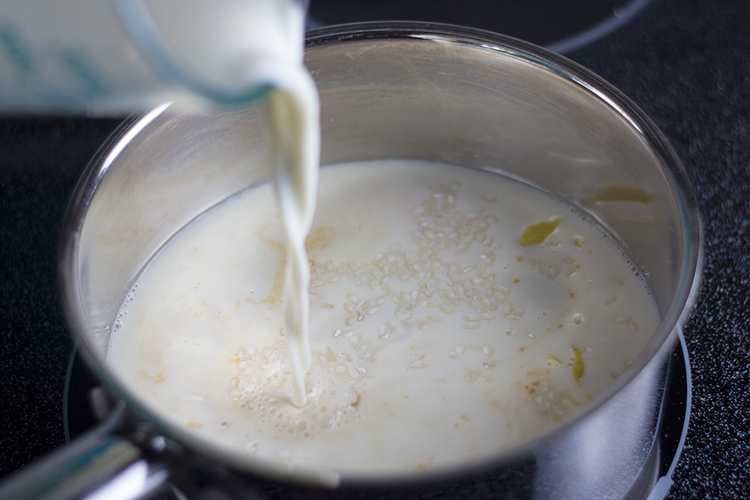 Pour in the milk. Bring to a low boil on medium high heat. Next, set the heat on low or whatever temperature gets you a nice and gentle simmer.

As you might be able to tell, I failed to adjust my f-stop while taking my “how-to” photos. The ones for the “low boil” and “gentle simmer” really didn’t turn out. It didn’t help that I was in a hurry. Never take photos when you’re in a hurry. I’ll try to retake these after we get back from our 4 day trip to Crater Lake. Yay for National Parks!

Cook for 35 – 40 minutes until the rice is nice and soft. Stir occasionally with a whisk and don’t forget to scrap the bottom, especially those edges. 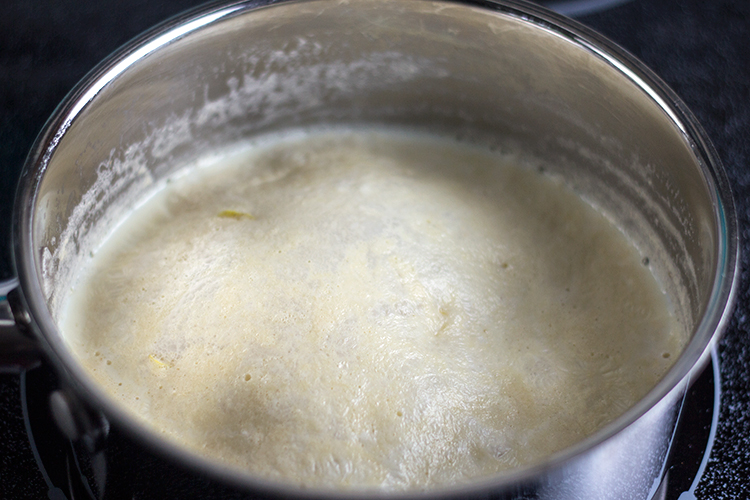 If you get a thick bubble skin, like this, towards the end, don’t worry. Just stir it with the whisk. 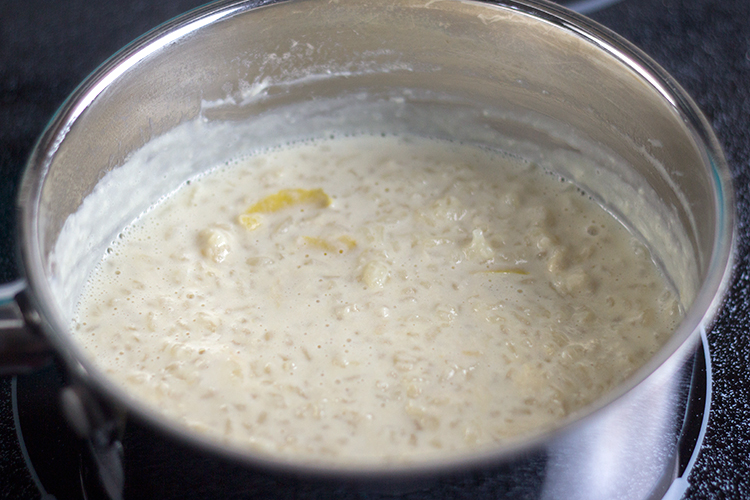 See? You can’t even tell it was there. 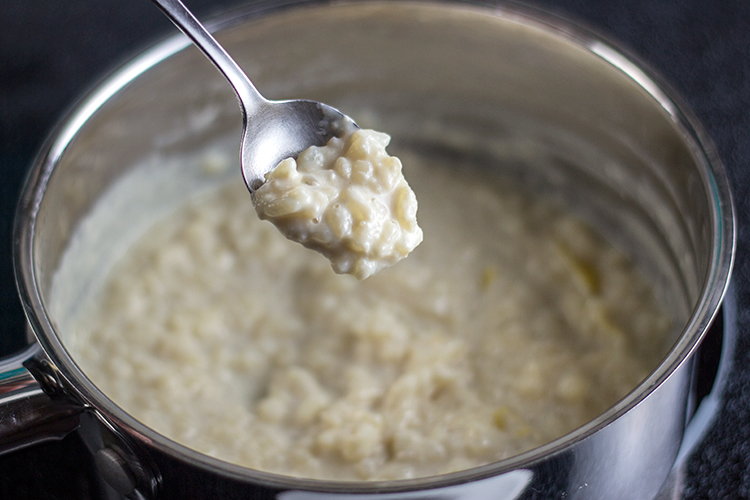 This is what it should look like once the milk is mostly absorbed. You can cook it a little less if you like your rice pudding more “wet”. 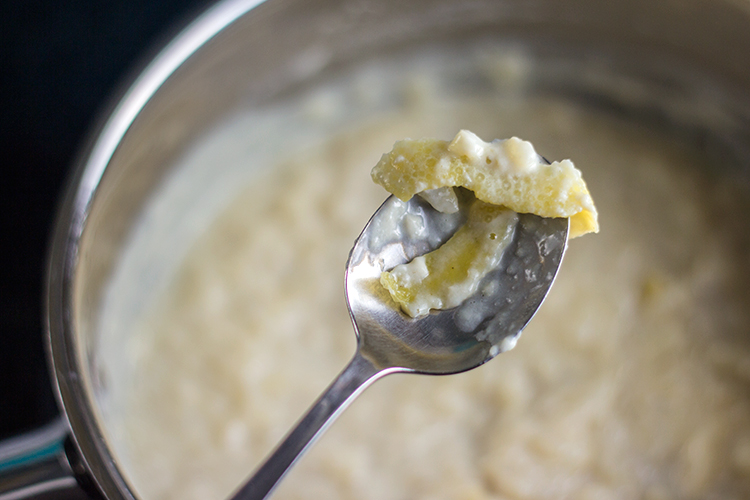 When it’s done, remove the lemon peel. Serve the rice pudding either warm or cold.

I love warm and with a sprinkle of cinnamon or topped with raspberries or cherries. 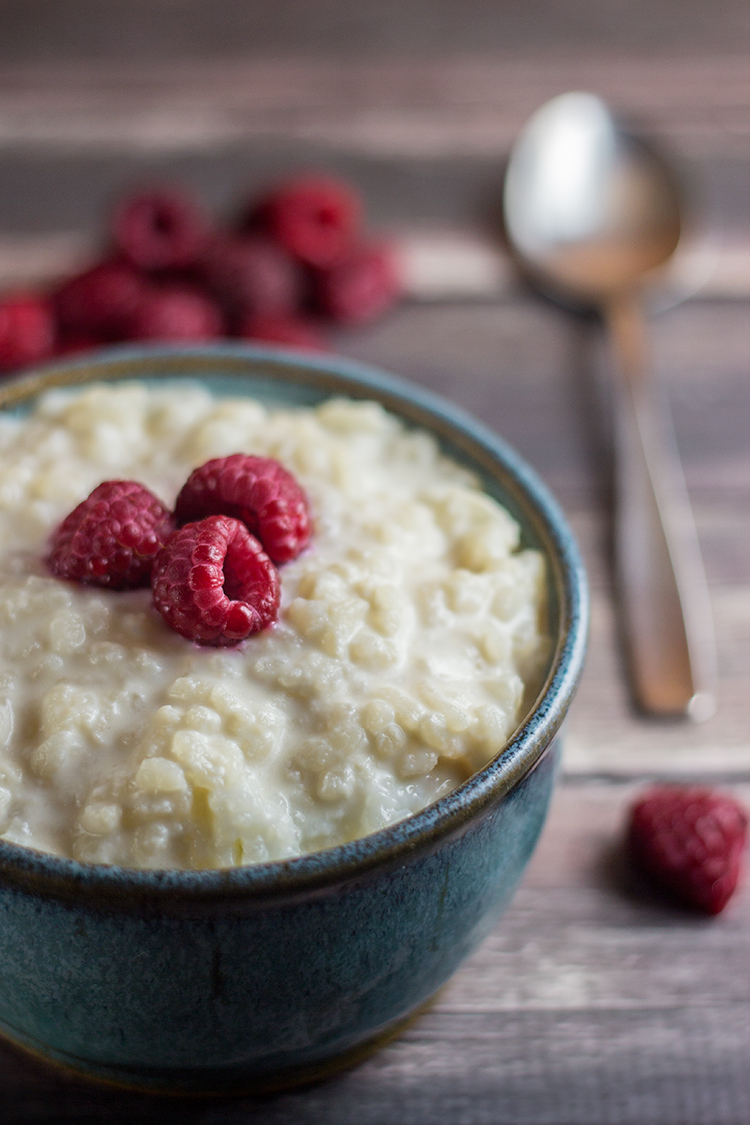 Whip up a pot for your favourite person or just treat yourself to this warm (or cold) bowl of comfort. 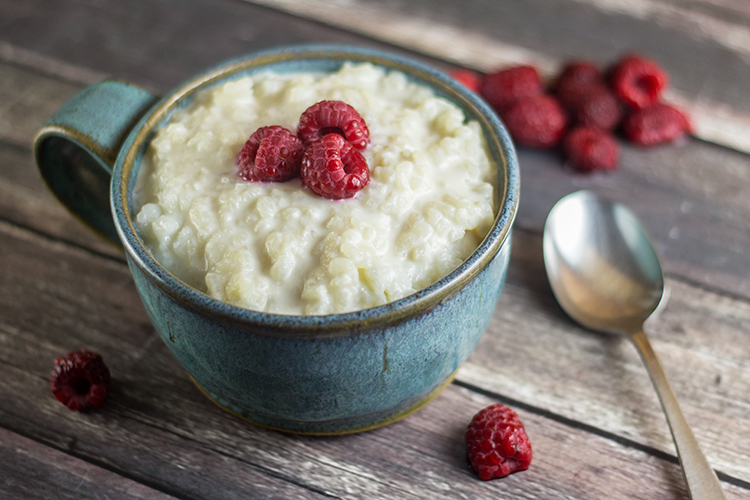 Was rice pudding a part of your childhood too? 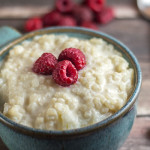