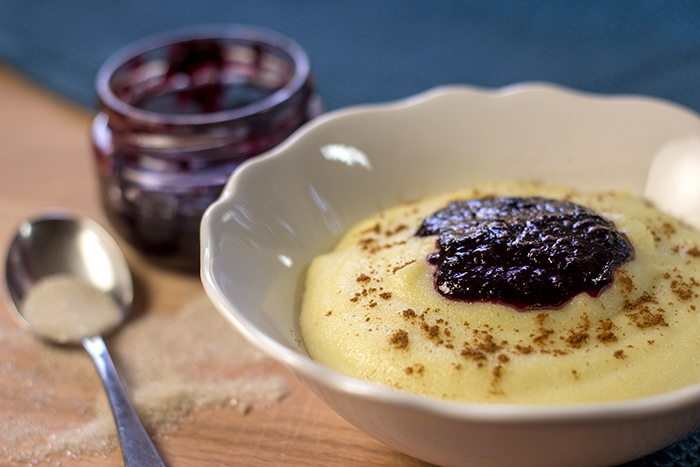 Do you have a childhood favourite dish that reminds you have your grandparents? Perhaps something special your Grandma or Grandpa would make for you when you came to visit?

Well, this is mine.

My Oma would always made this semolina pudding (Griessbrei) for me when she was making fish for lunch.  I was the rare grandchild in the family that didn’t like fish and since Opa was a fisherman it meant there was a fair amount of fish served at meals.  Opa would grumbled about my getting something else to eat but Oma would quietly shush him and continue to make sweet semolina pudding for me. It was always served with dots of butter and sprinkled with cinnamon and sugar. It was like dessert for lunch!  That’s basically what it was because it’s not uncommon for semolina pudding to be eaten as a main dish at lunch or light dinner in Germany or as a warm dessert.

I have to admit I’m pretty pleased about having an easy version I can make for myself now.  Before this, I thought I could only make it by getting the Dr. Oetker boxed version. No more!

Wikipedia explains semolina as the “coarse, purified wheat middlings”.  As I understand it, it’s the gritty by-product that gets sifted out when wheat is milled to make flour.  Technically, it’s the heart of the wheat kernel or also known as the endosperm.  It’s good stuff and good for you – full of iron, vitamin B and selenium.

When we just use the name “semolina”, it refers to the middlings of durum wheat, which is a hard type of wheat grain.  It’s the same grain that’s used to make pasta and couscous.  If you refer to any other kind of semolina, it uses a descriptor, like corn semolina or rice semolina.  I’m sure you’ve heard grits before.  Well, that’s made from corn semolina.  Non-durum wheat semolina is known as farina.  It’s what’s used to make Cream of Wheat hot breakfast cereal here in the States.

Woo, bet you’ve never read the word “semolina” so many times in one sitting before.

On to the recipe!

You’ll only a small pot and these four ingredients for a single serving portion:

Let’s do this the easy way –  just put all the ingredients together in a small saucepan. 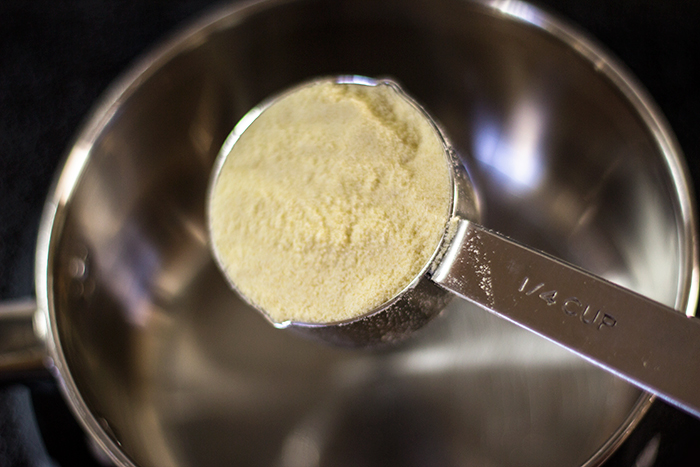 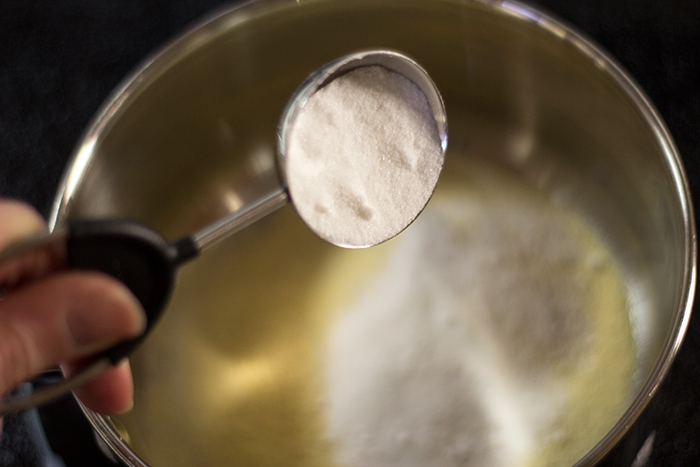 A tablespoon of vanilla sugar. 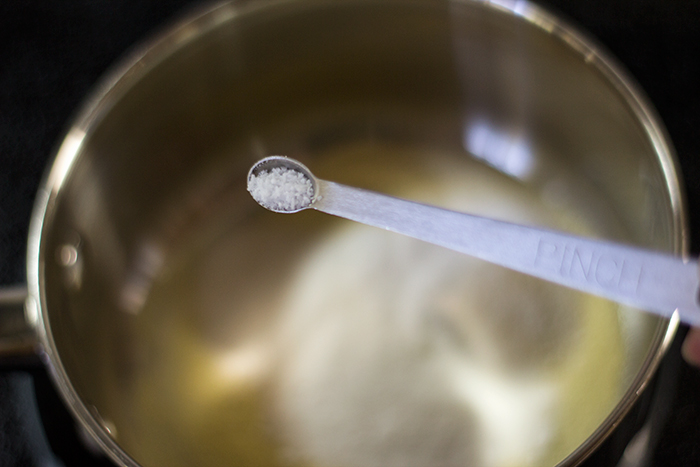 A pinch of salt. 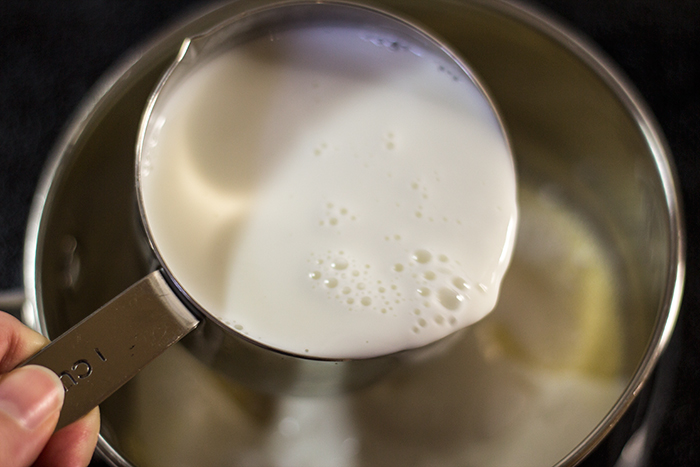 Lastly, a cup of milk. 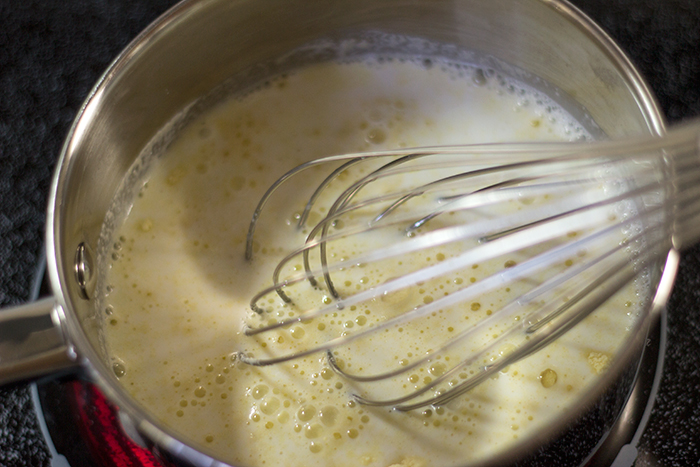 Heat the burner to medium high and use a whisk to combine the ingredients. 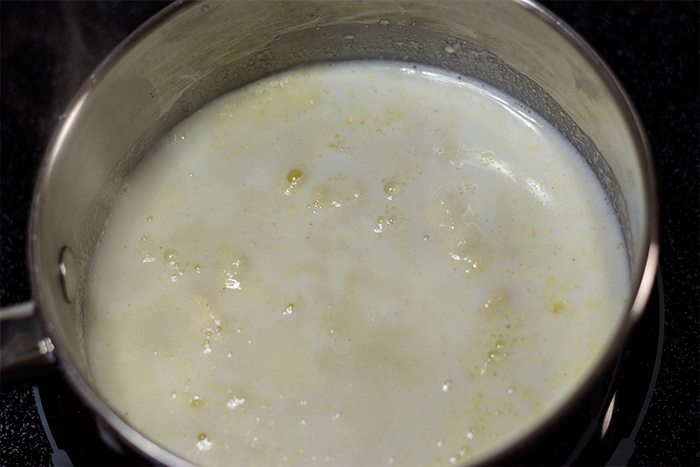 Bring it to a soft boil but be careful not to burn the milk.  Stir occasionally to make sure it’s not sticking to the bottom or the rounded edges. 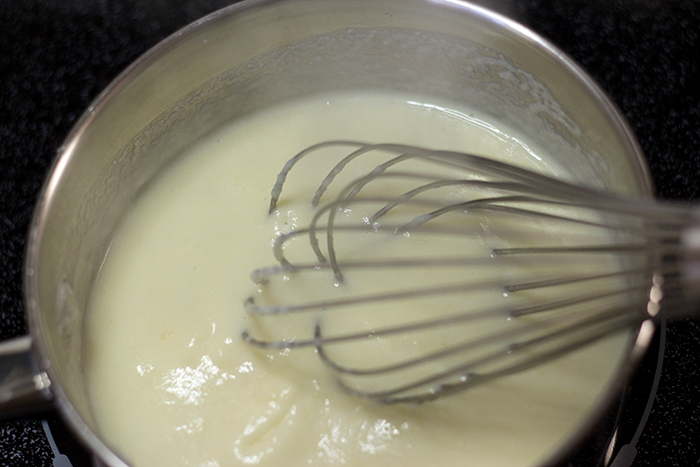 Once it’s boiled, turn the heat down to low and stir continuously for 5 minutes or until to a thick porridge consistency. 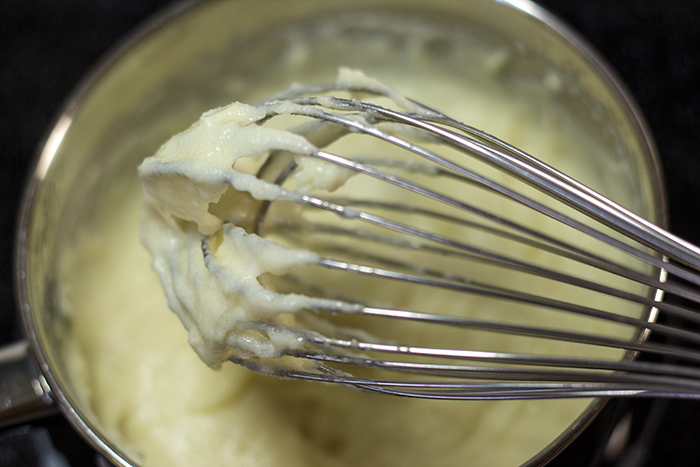 That’s all there is to it.

It’s best served in a shallow bowl so that you get more surface area to cover with the topping of your choice – sugar, cinnamon, jam or a fruit compote. Remember the rumtopfs I made last summer? That would go perfectly on this if you wanted to serve it as a dessert with a little kick.

My favourite is simply a pat of butter to melt on top and sprinkled with cinnamon. Mmmm, it’s melty, cinnamony-butter goodness. 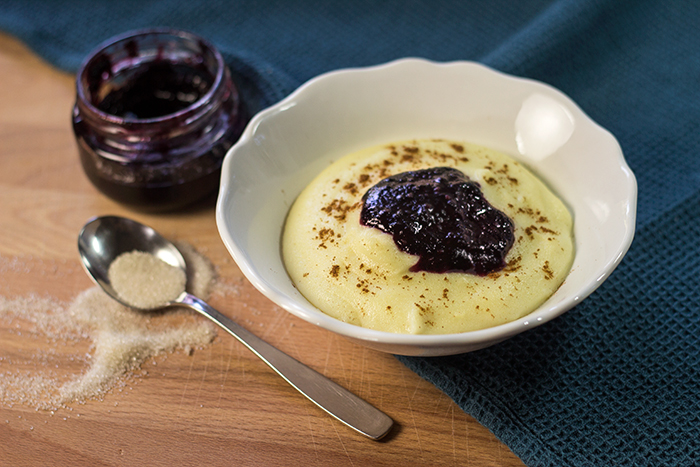 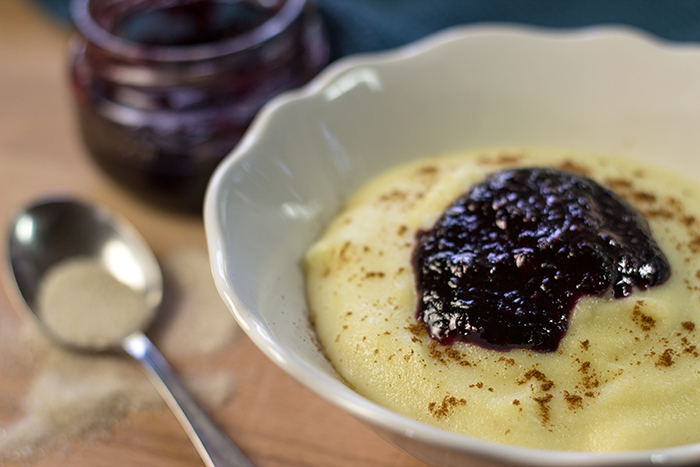 Okay, that’s enough pictures, I think.  Time to chow down on this bowl of creamy deliciousness.  Still tastes great when it’s cold!

Oh, wait, let me add this last tidbit of info.  If you want to get fancy with any leftovers, just slice it up and fry lightly in some butter.  Serve with the jam of your choice.

Hope you’ll give it a try and tell me what you think. 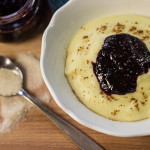 A quick, creamy porridge that's perfect for breakfast, dessert or even just as dinner.
Servings 1

You can add another tablespoon of sugar and omit it all together.
Can be made with coconut, soy or rice milk but will won't taste quite as creamy.
Add half cinnamon stick, lemon peel or some scrapped out vanilla bean for stronger flavour.