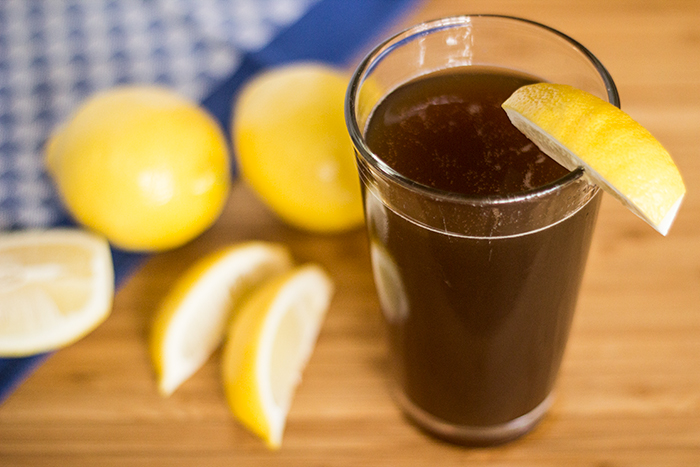 If you’ve ever spent any time in Southern Germany and are a soda drinker, you’ve likely had the pleasure of trying a Bavarian soda specialty called Spezi.  I say pleasure because I’ve never really run into anyone that didn’t like it once they’ve tried it.  Generally, folks become pretty enthusiastic about it.   Unfortunately, it’s not easy to find in the States, which is why I’m trying to see if I can make an equivalent or close approximation.

Jump ahead to the homemade Spezi!

First, I should probably explain what Spezi is – a soft drink made with cola, orange soda and a little bit of orange and/or lemon juice.  Let’s take the idea of the American Fanta or Orange Crush right out of your head because German orange soda (and their Fanta) is much more like a carbonated orange juice.  It’s actually yellow, not orange.  Think more along the lines of Sanpellegrino Aranciata, that refreshing, sparkling orange beverage.

Second, I should explain that “Spezi” is actually a brand name.  It’s like saying you want a Coke or Pepsi, versus just a cola.  While there are four main brands of this soft drink in Germany, most folks just refer to the drink as Spezi.  Though, technically, anything other than what’s sold by the original Spezi makers is called “Cola-Mix”.

The Original Spezi –  Made in Augsburg, Germany by Brauhaus Riegele since 1956.  Interestingly enough, Spezi was first a type of beer.  One of their claims is that they’re only ones to use real orange and lemon juice.  Their recipe also has mandarin oil and orange blossom extract.  Mmm, fancy.  Their tagline is “Spezi ist Spitze – trinkt das Original!” (Spezi is great – drink the original!).  Personally, I have never seen this one outside of Germany.

Mezzo Mix – Made by the Coca-Cola Company.  Their tagline is “Cola küsst Orange” (Cola kisses Orange).  I’ve seen this one at a few German Delicatessens.

Schwip Schwap – Made by the the PepsiCo.  Their tagline is “Erfrischt Dich Fruchtig!” (Refreshes you Fruity!).  I don’t remember seeing this in the US.

Paulaner Spezi  – Produced by the Paulaner Brewery in Munich, Germany and bottled in brown beer bottles with a snazzy and rather retro label in yellow, orange, pink and purple.  I’m not as familiar with this one (that I know of) though I read it has quite a cult following.  Not exactly sure why their version also gets to use the name Spezi.  Maybe because it’s also made by a brewery, versus a soft drink company.  If you happen to know, please share with us!

Okay, so that’s all I’ll say about the different Spezi brands.  Information wasn’t easily found so I’ll try to continue to expand on this in the future. For example, I would love to know if different brands are more popular in some areas than others.

On to the Homemade Spezi recipe!

So, the only Spezi soda I was able to find locally was Mezzo Mix and Paulaner Spezi at Bavarian Meats in Seattle.  This is what I’ll be using to taste test my recipe. Unfortunately, I’ll have to wait until I get to Germany in December to try the Original Spezi again to compare. Maybe I’ll think about taking a bottle or two back with me? 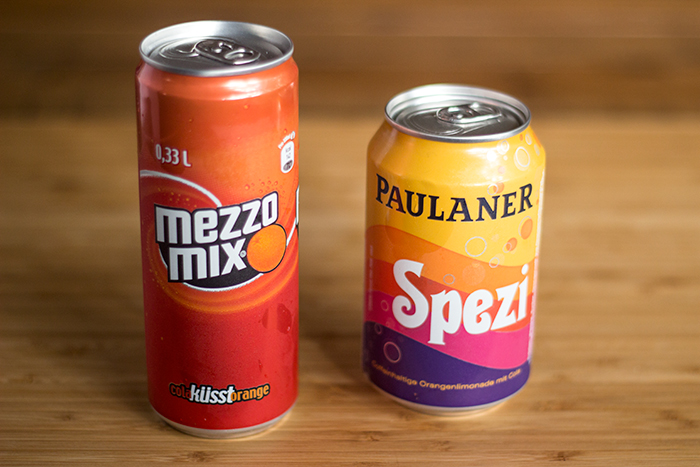 Here you go – the Mezzo Mix and Paulaner Spezi.  If you haven’t seen these sodas before, I just wanted to show them to you. 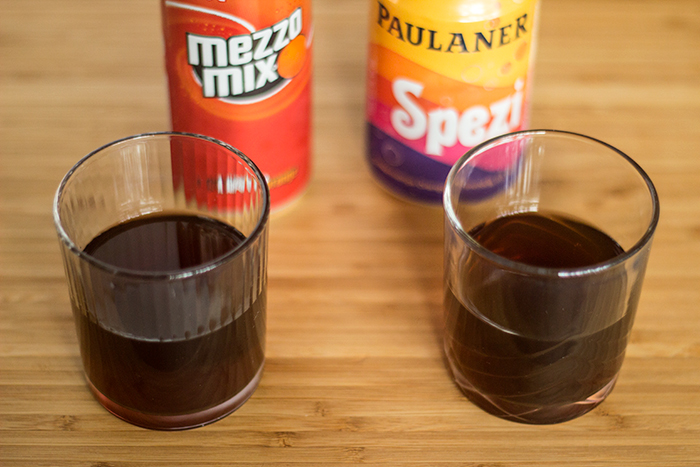 Also wanted to show you a comparison of what they look like out of the can.  Really not that much different and very similar to coke, just a little lighter, or warmer, in colour.  Upon tasting to two right after one another, I found that I preferred the Paulaner Spezi.  Not that that really matters, it was just noteworthy to me.  It’s a tad bit sweeter. 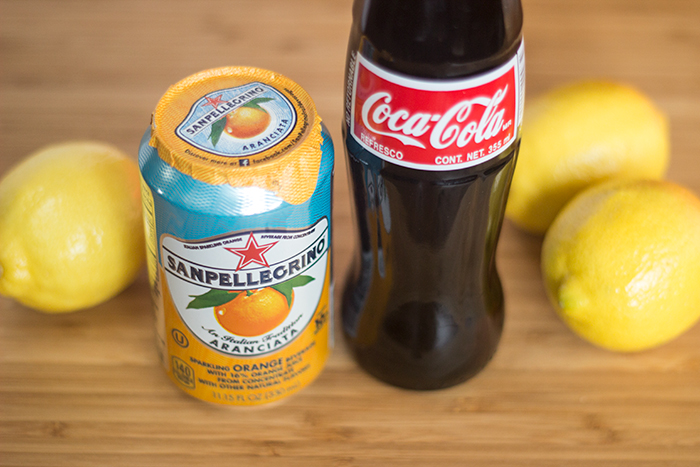 So these are the ingredients I’ll be using – SanPellegrino Aranciata and Mexican Coke.

I have to admit, I’m not a huge fan of regular coke or pepsi. I tried to find Virgil’s Real Cola, Jones Pure Cane Cola Soda or even Trader Joe’s Vintage Cola but had no luck.  Actually, turns out that the latter has been discontinued.  So, Mexican Coke will have to do.  Okay, yes, I’m a little bit of a soda snob!

I won’t be using all of those lemons.  That’s just to make the pictures a little more colourful. Also, Spezi is typically served with a lemon wedge at a restaurant.  Though, using oranges might have been more apropos.  Perhaps I’ll have to retake these pictures sometime in the future?

Anyway, so are the ratios I tried.  I was expecting to try several, but only ended up with two ratios and then two variations.  I’ll explain…

Half Cola and Half Orange:  My Mother told me that when she worked in restaurants in Germany that this was the ratio they used when making Spezi for customers. Typically this was if they were out of the actual Spezi.  I expected this to work right off the bat but, for me, it didn’t.  The colour was too light and the orange was overpowering.  I’m expecting that if you were to do half and half using German Fanta for the Orange, it would work.  However, the Sanpellegrino Aranciata isn’t that sweet.

Two Thirds Cola and One Third Orange:  I was completely surprised that this worked right away.  I was expecting to have to tweak it with fourths instead but this is so darn close! Immediate winner for me and I didn’t experiment any further.

Two Thirds Cola and One Third Orange with the juice of one lemon wedge:  Since it’s served with a lemon wedge, I wanted to see what it would taste like with the lemon juice.  Also, if you remember, the Original Spezi uses both orange and lemon juice.  However, this didn’t work for my tastes buds.  Made it fairly bitter.  So, unlike squeezing the lemon into my water or ice tea, I won’t do that with the Spezi.  Ooh, I think that rhymed.

Two Thirds Cola and One Third Orange with a splash of orange juice:  Just for kicks and giggles, I thought I would try this.  Positively delightful.  It does make it a tad sweeter than regular Spezi but I loved it.  Would definitely recommend doing this!

For the German experience, serve chilled without ice cubes. 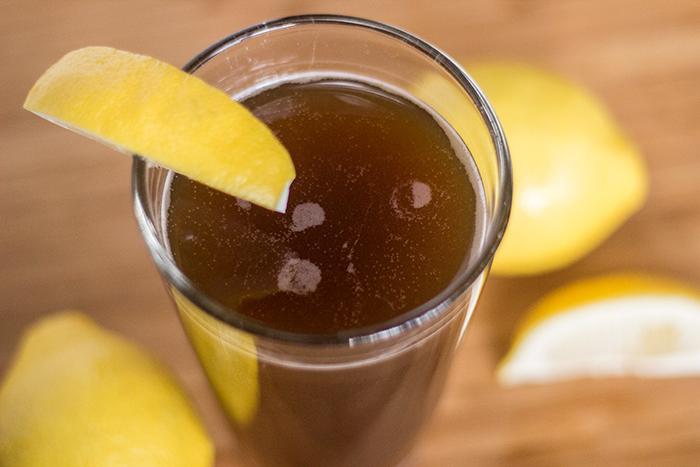 Excuse me while I figure out what to do with all this homemade Spezi.  Really should have shown you my counter top for a chuckle.

If you try it out, let me know what you think! 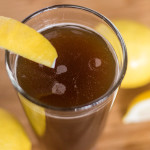 For the German experience, serve chilled without ice cubes.
Add a splash of orange juice if you it sweeter.
Add the juice of one lemon wedge if you want it more sour.

Have you ever had Spezi before?  If so, do you have a favourite brand?