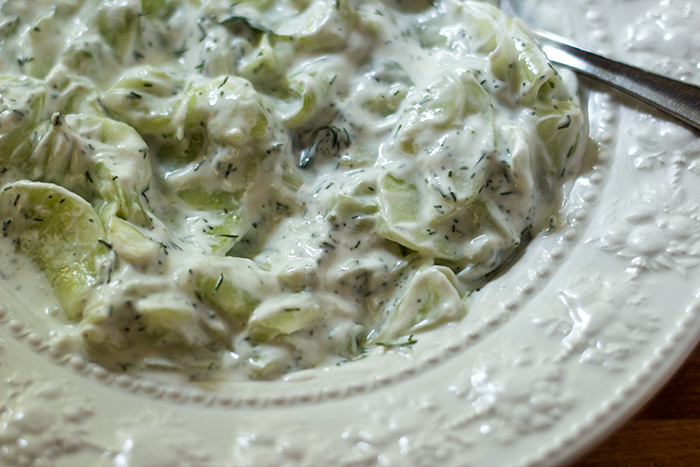 Gurkensalat! Cucumber salad! There’s not much I can say about this delicious, creamy, dilly, crunchy salad other than it’s one of my absolute favourites.  It’s one of those tastes that will always take me straight back to childhood because it was something my Mother made often.  It can be enjoyed any time of the year but I especially love it in the summer.  There are hundreds of variations out there, especially for the dressing but there are always two constants – long cucumbers (known as English, Hothouse, European or Seedless) and dill.

If you are unfamiliar with English cucumbers, I’ll tell a little about what makes them different.  Typically (unless you get a very mature one) they are sweeter than their shorter cousins and have much smaller, softer, thinner seeds.  It’s the seeds that make cucumbers bitter, hence the milder taste. Any time they’re labeled as seedless, it’s not technically true.  Like seedless watermelons, they have seeds but they aren’t very noticeable. There’s no wax coating for these cukes, which is why they’re sold wrapped in plastic. It helps retain the moisture. Overall, they are a little more expensive, but so worth it.

Now, let’s get to work on the cucumber salad! 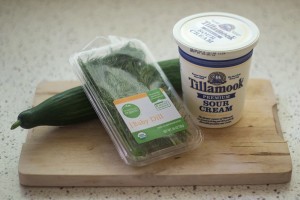 It’s just these three ingredients, plus a little salt to taste.  So, let us begin! 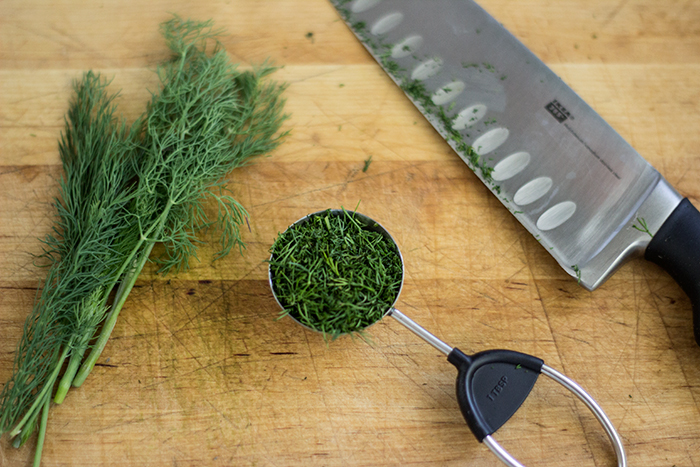 Finely chop the fresh dill until you have enough for a tablespoon.  One teaspoon of dried dill can be used instead. Fresh is always best but it can be a hassle and/or expensive to get, I know. 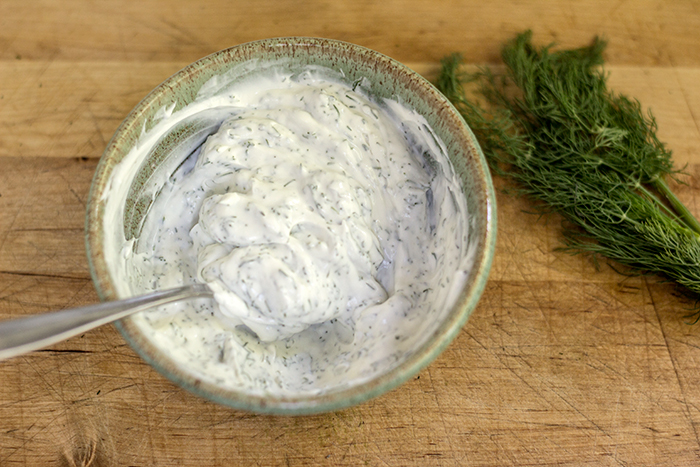 Take the dill and thoroughly mix it together with half a cup of sour cream (low fat, full fat or whatever your pleasure) in a small bowl.  Set this aside while we continue with the next steps so that the flavours can start to blend. 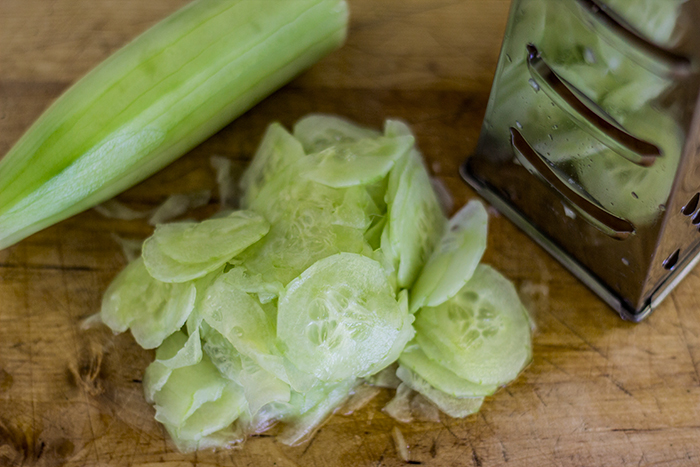 Next, let’s peel the cucumber. Then go ahead and get it thinly sliced. This is important (in my opinion, anyway) so there’s more surface area for the dressing.  I just use the vegetable slicing side of a box grater.  If you have a mandoline or feel like breaking out the food processor, those work well too. 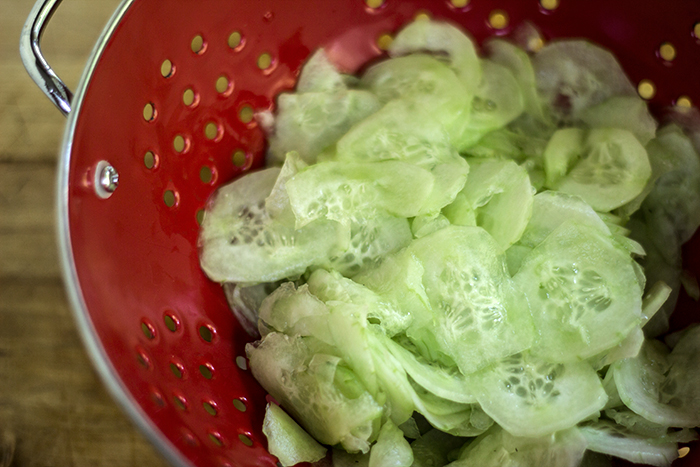 Put the sliced cucumbers into a colander so they can drain.  Why?  Read on, my friend… 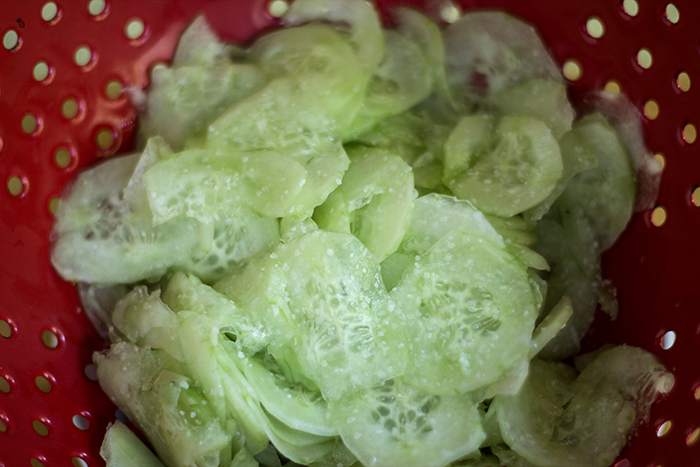 Sprinkle a liberal amount of salt over the cucumbers.  This draws out some of the moisture which is key to diluting the sour cream a little so it’s more like a dressing.  The amount of salt is personal preference. I sprinkle once, give the cucumbers a good toss and then sprinkle again.

You can also skip the salt completely, but as I’ve made it with and without salt, I feel like it really benefits from the extra flavour. 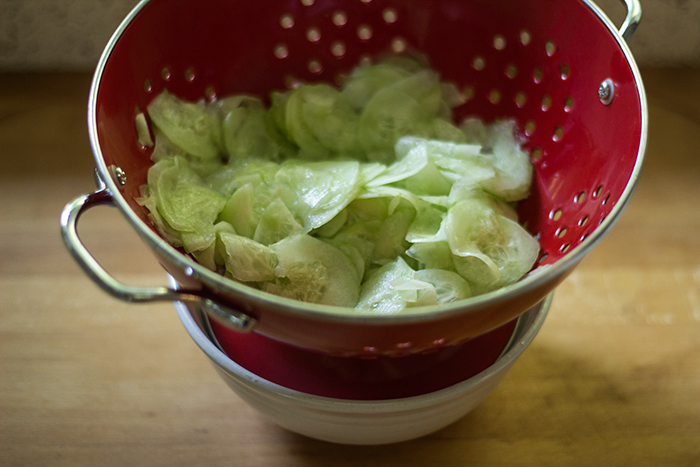 Let it sit and drain for about 30 minutes.  I place a bowl under the colander to do this.  When you lift the colander, you’ll have a fair amount of liquid in the bowl, which is what you want.  Just go ahead and discard the cucumber “juice”.

You can also pat the cucumbers dry a little with a paper towel, if you feel like they’re too “juicy” but I like to throw it together just as they are.

Put the cucumbers and the dilly sour cream into a bowl together.  Mix thoroughly and voila! 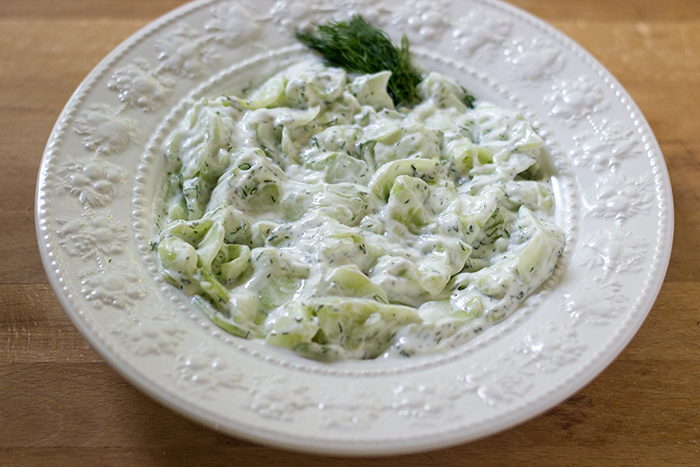 A refreshing side dish or a light snack on a warm day.

You can certainly eat it right away but I always prefer it chilled for at least an hour in the fridge.

Technically this makes about 4 small servings, as it’s meant to be a side dish.  However, since the boyfriend isn’t really a  fan of the crunchalicious cucumber, I get to enjoy this all to myself.  Then, it’s more like 2 servings.  Or… sometimes just 1.  What can I say?  I really like this salad. 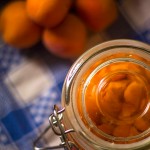 1 tsp of dried dill can be substituted for the Tbsp fresh dill.
You can pat the cucumbers dry with a paper towel if they're still too "juicy".
Can be eaten right away but best served after chilling for 1 hour in the refrigerator.