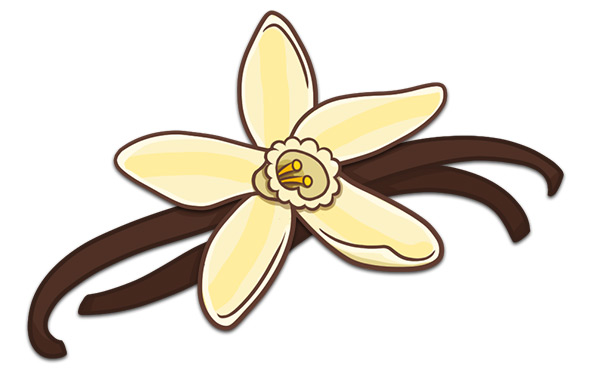 Ahh, vanilla.  The smell of reminds me of warmth, simplicity and comfort.  It’s  a commonplace but highly valued ingredient in baking and any baker worth their salt is going to a good quality extract in their spice cabinet.  However, in most of Europe they don’t use vanilla extract.  In fact, it’s pretty much non-existent at the local market.   They have something a little different and it’s vanilla sugar or Vanillezucker.

While vanilla extract isn’t something that I go without here in the States, I feel that vanilla sugar is a little more versatile.  You probably wouldn’t think of pouring a teaspoon of vanilla extract in your coffee or over a bowl of fruit as it can have a somewhat bitter taste due to the alcohol. Though, you certainly do both with vanilla sugar.  With extract you’re somewhat limited (depending on your personal preference, of course) to using it with wet ingredients.  With vanilla sugar, you can add it to wet and dry ingredients and generally it won’t discolour anything white, like whip cream. Honestly, that part doesn’t really matter to most for our homemade goods.

A little bit about vanilla

Did you know that vanilla comes from a creamy white orchid and is the second most expensive spice after saffron?  I didn’t until I started researching it for this post.  Most commercially made food and drink items with vanilla flavour don’t use real vanilla extract.  Instead, they’re using an artificial vanilla or technically synthetic vanillin (vanillin is the primary flavour and aroma component of the vanilla bean extract), which is either made from made from lignin, a natural polymer byproduct of wood pulp that has been used to make paper, or is chemically synthesized. Yum.

Typically you can find vanilla sugar packaged in packets of 6.  In the image below you’ll see the three different packets of vanilla sugar.  The first one I found at the local delicatessen and the second at the grocery store.  The last one my Mother sent to me after her last visit to Germany.  The last two are basically the same, just different brands. The taste differences are somewhat subtle, with the natural being the most delicate.

Both the boyfriend and I agreed that the natural vanilla sugar had the strong aroma you come to expect from vanilla.  The major difference is, of course, price.  The “real stuff” will always be more expensive.   In Germany, you can tell the differentiate between natural or artificial vanilla sugar by the name.  If it’s Vanillezucker, it will be natural.  If it’s Vanillin-Zucker, it will be flavoured artificially.  Look for the “E” versus the “IN”. In North America, you can tell by whether it says “natural” or “artificially flavoured”. Though, those words are always much smaller so you have to be a little more watchful if it matters to you.   Ultimately, I’m not saying one is better than the other.  It depends on what you prefer. 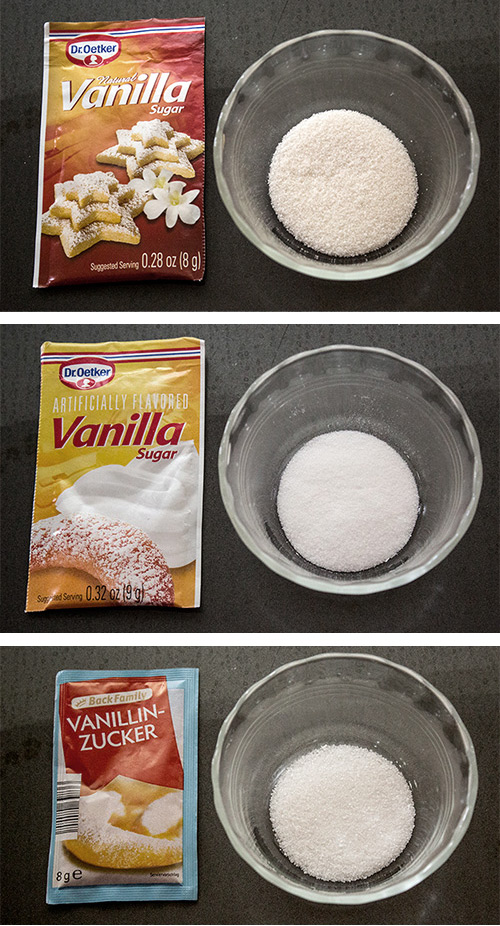 It’s all up to you on what kind of vanilla beans you want to use, though Madagascar is said that have the most “traditional” vanilla taste.  For my vanilla sugar, I used Madagascar Bourbon vanilla beans mainly because it was the least expensive out of the two available at the store ($9.99 for 2 versus $14.99 for 2 Mexican ones).  It is an investment since the beans last a really long time in the sugar. In the future if I need more vanilla beans I’ll order them on the internet, like from Beanilla.  There’s more variety and prices are a little better. 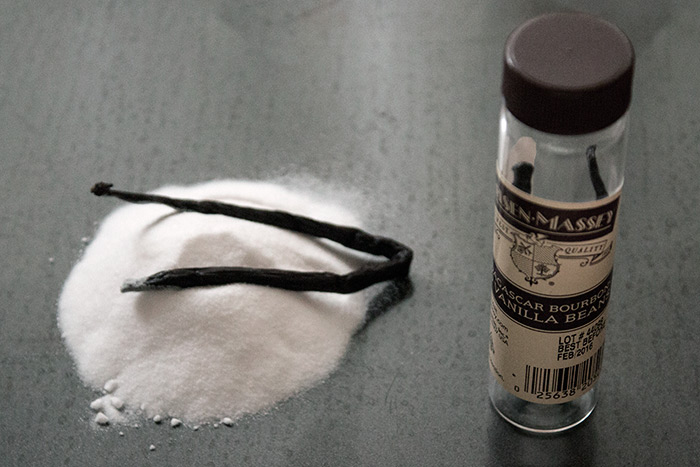 Directions 1:
The simplest way is as follows.

You then wait for at least 3 weeks for the flavour to fully infuse throughout the sugar.  You’ll want to shake it every couple of days for the first few weeks to make sure the flavour distributes nicely. As sugar levels get low, just add more and give it a good shake afterwards.  This method takes the longest  but also lasts the longest (2 years minimum) since you’re not using up the beans.

Directions 2:
If you’d like to go one step further and have a little more of an authentic, black speckled look to your sugar, try out this method.

With this you only need to let it sit for about 1 – 2 weeks.   Just don’t use any pieces of the pod when you’re grabbing a teaspoon or two.  You should be able to add more sugar once it’s getting low but since you’re using up the seeds, the vanilla flavour won’t last quite as long.

Directions 3:
Alternately, you can try this even quicker way if you have all the equipment:

With this method, you’ll need to make more once it’s gone. 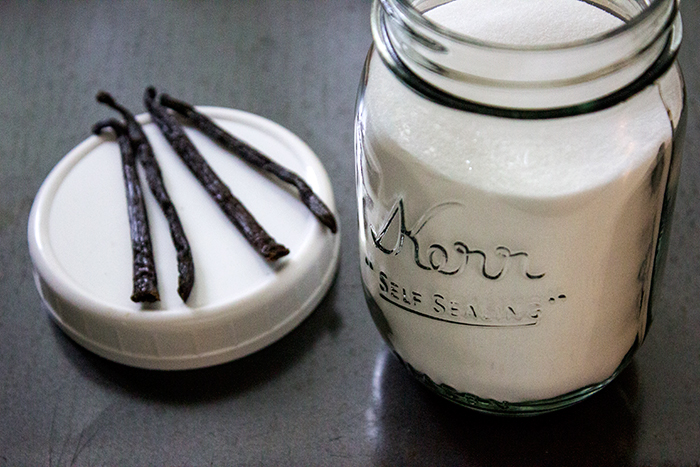 About 1.5 teaspoons of homemade vanilla sugar equals a packet, which is typically what is called for in German recipes.  You can easily round up to 2 teaspoons, if you want a sweeter, stronger taste.   Technically, 1.5 teaspoons is 0.25 ounces and 2 teaspoons is 0.33 ounces.  Most packets contain 0.28 to 0.32 ounces.

If you live in a humid area, like I do, expect your sugar to get a little (or a lot) clumpy.  This doesn’t hurt anything and you can just break it up as needed. Regular ol’, granulated white sugar is the best for this recipe.  Though, I am trying out ultrafine (also known as superfine, caster or baker’s sugar).  Why?  Simply because I wanted to see if it would work.  Also, I have plans to use it for some recipes that need this type of sugar, like pavlovas (totally not German, I know).  It should end up being more like packet #2.  I’ll update with my results in a few weeks. 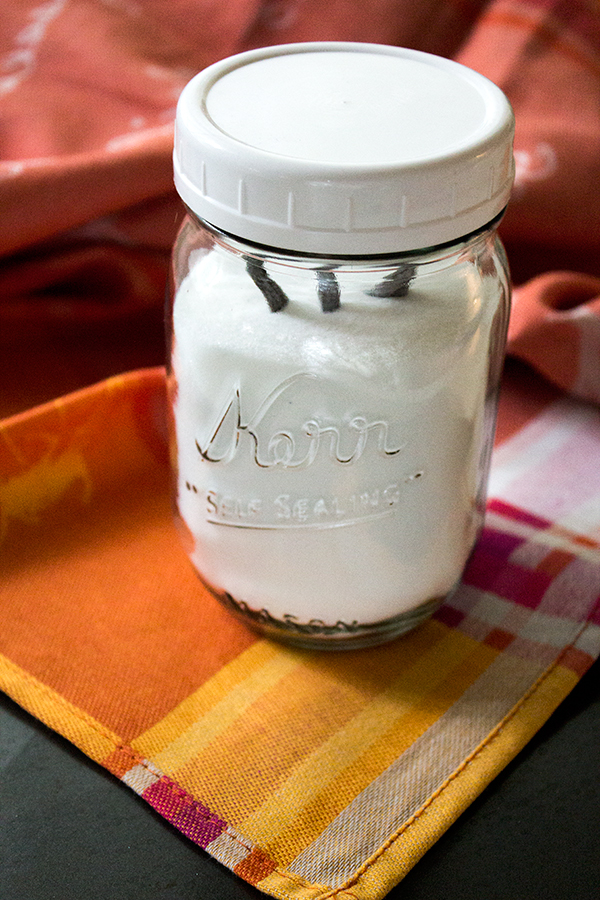 Voila.  Finished vanilla sugar ready to be placed in the pantry.  That wasn’t very hard, was it?   Try it in your coffee, tea or use it to make hot chocolate.  Or maybe sprinkled on pancakes, fruit or even plain yogurt? Oh, the possibilities…

If you absolutely must have vanilla sugar right away and will be using it with wet ingredients (like dough), you can combine 1 teaspoon of vanilla extract with 1 teaspoon of white sugar.  If you need something for sprinkling, there’s no way around it and you’ll have to just use regular sugar.   Mahlzeit! 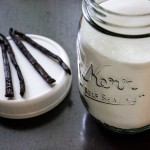 - Store in dark, cool, dry place, like a pantry, closet or basement.
- Shake every so often for the first few weeks to evenly distribute flavour.
- As sugar levels get low, just keep adding more. Always shake after adding new sugar.