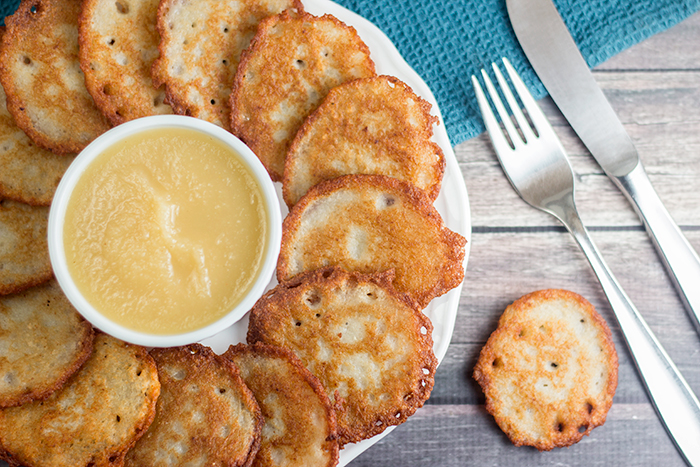 If you’ve never had potato pancakes then you’re missing out big time, in my opinion. These crisp disks of potato goodness make for a versatile side dish, a meatless dinner, or just a great snack, especially if served with a side of applesauce.  They’re quite popular in Germany at outdoor markets and festivals from Oktoberfest celebrations, Christmas Markets to Fasching/Karneval.

The basic recipe consists of using shredded raw potatoes (Stop thinking hash browns. They’re not hash browns), shredded/grated onion, salt and egg(s) with either flour or semolina as a binding agent. Yes, they’re similar to latkes except that latkes sometimes use matzo or breadcrumbs. The other slight difference I see between the two is that the German version is fried in either canola oil and/or bacon fat, whereas latkes are more likely to be fried in olive oil and/or chicken fat (schmaltz).

This recipe I’m going to show you here is a technique that’s sort of a cross between the basic shredded raw potato recipe and my Oma’s recipe where she used leftover cooked potatoes. It still uses raw potatoes but it creates a sort of batter that’s easy to manipulate. The results end up being very similar to what my Oma made with cooked potatoes.

It was my goal to get small potato pancakes that fried up nice and crispy on the outside but were still soft-ish on the inside. Potato pancakes can be any size you want but typically they’re what I would consider to be medium in size. However, I like mine small, only slightly larger in diameter than your average cookie, and this “batter” makes it a cinch to accomplish. Not only that, there’s no messing with squeezing the water out of the raw potato shreds or forming cooked potatoes into palm size patties with your hands. I like easy with less hand mess. I mention that a lot, I know.

First off, I’m going to admit that was skeptical about using baking powder in a frying recipe, even though I had seen a few recipes on the internet in both English and German that called for it. When I found this short article online from the Süddeutsche Zeitung (Munich’s newpaper) that recommended it this, I was finally convinced. It works out really well here to give a wee bit of uniform lift.

Here are the two recipes I’m combining to make my own, if you’re interested – this one from Renee’s Kitchen Adventures and this one from German site called Hausfrauen Tips (or housewife tips). 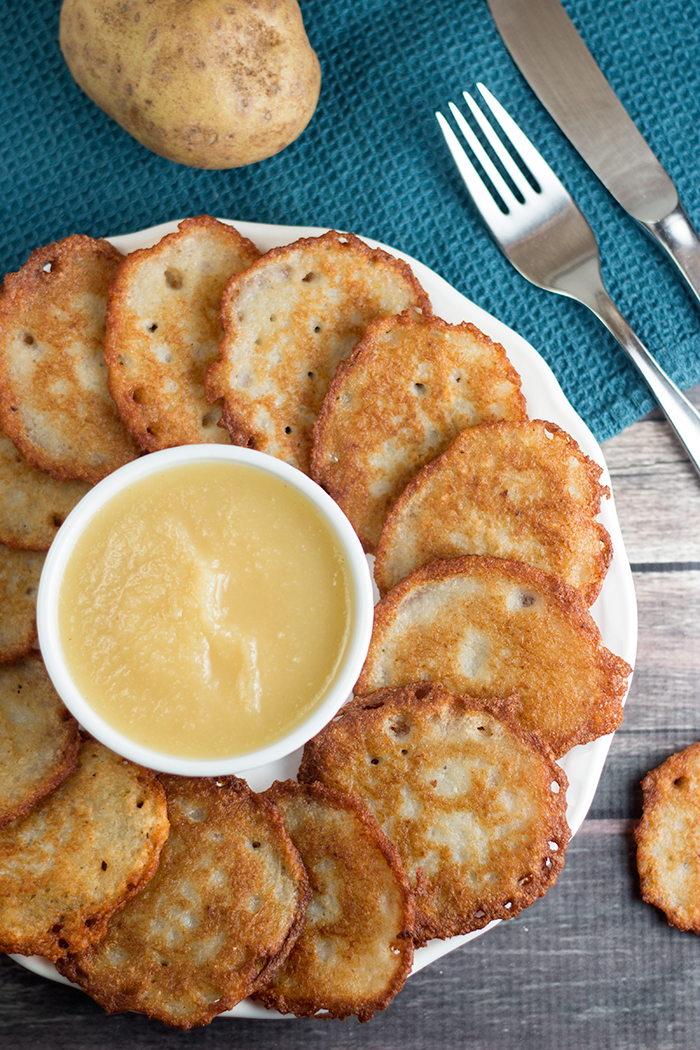 As I mentioned earlier, my favourite way to eat these potato pancakes is with apple sauce. Some folks like them with an apple or dark berry compotes or a sprinkling of just plain sugar. If you’re interested in something a little more savoury, you can try them with sour cream or spread a little butter over top with some salt and pepper.

I’m using the “generous pinch” to substitute the German measurement of “a knife tip’s worth” or “Messerspitze” in cooking/baking. It’s one of those measuring techniques that doesn’t need to be exact, as not everyone uses the same knives, but round about that will work just fine. 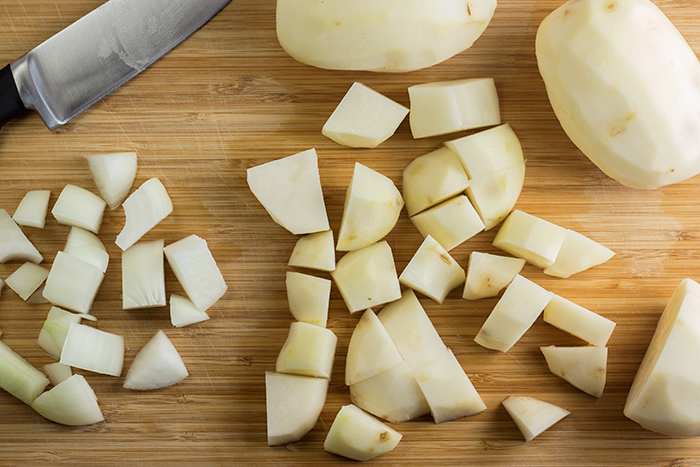 Wash, peel and cut up your potatoes. Roughly chop up your onion too, while you’re at it.

This is when I also start warming up my largest frying pan on a medium-medium high heat. 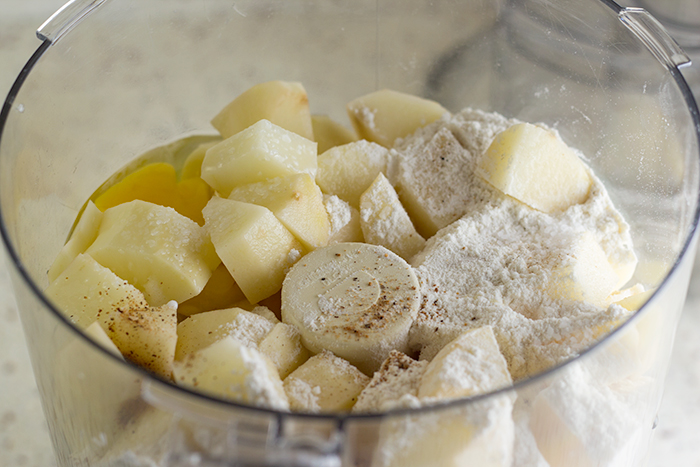 Place the potatoes, onions and all the rest of the ingredients into a food process with the serrated blade attached.

In case you’re wondering, the splash of lemon juice helps slow down the oxidation of the potatoes. Otherwise, the mixture gets pretty brown pretty quick, even black, if left long enough. It’s not attractive. 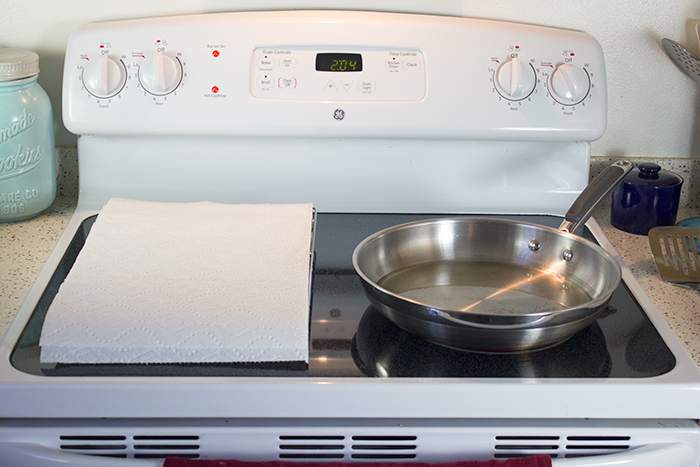 Before processing it all together, get you pan ready by pouring the canola oil until it’s about 1/8 – 1/4 deep so they get a nice and even fry. When it’s shimmering actively, it’s ready to go. I also set up my paper towels on the wire cooling rack. 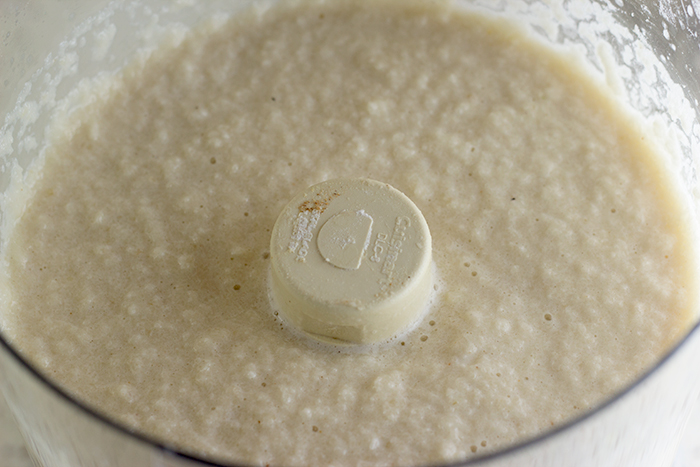 Blend the ingredients in the food processor for about 2 – 4 minutes until there’s no chunks left. 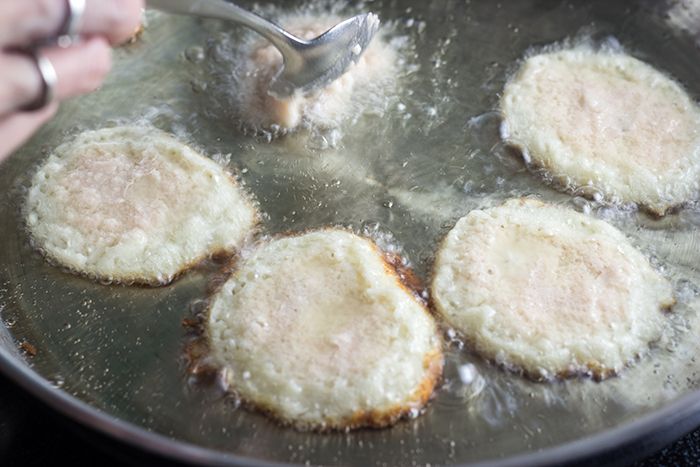 With a large spoon, or soup spoon, drop little heaps of batter into the hot oil. Flatten them out a little with the back of the spoon.

Again, I’m going for cookie sized but you can make them as large as you want. A heaping spoonful of batter makes for a good size too, if you want to go a little larger. 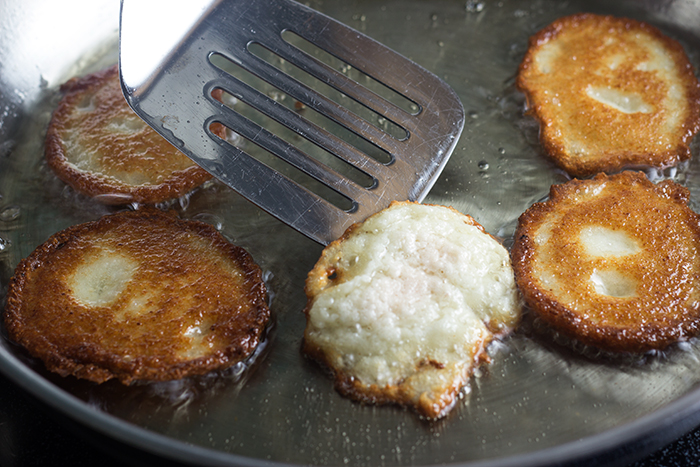 I do not time the first side exactly because I find that the heat of my oil fluctuates and I get different levels of brown when I do. Instead, I watch. I watch for the edges to become a golden brown and then I test it by lifting the edge of a potato pancake with the tip of my spatula. If it lifts easily and is stiff, it’s time to flip. If there’s give in the middle, like it wants to fold over, I let it cook a little longer.

These ones are a little dark. Trying to take photos and keeping an eye on frying potato pancakes isn’t the best thing to multi-task. 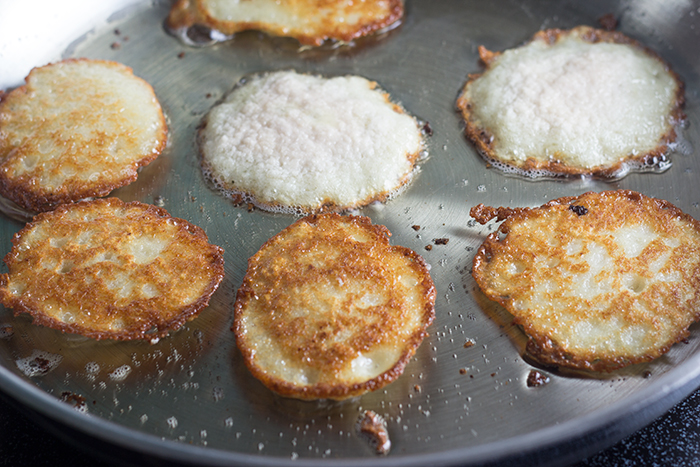 For the second side, I time it around a minute or so. It’s usually done quicker than the first side.

Flip them only once. Don’t flip them repeatedly or you’ll ruin the crispiness. We can’t have soggy potato pancakes, now can we? That being said, it’s totally okay to flip the first one more than once until you get a feel for how long it takes to fry them to get the other side golden brown. My first few ones usually turn out lighter. 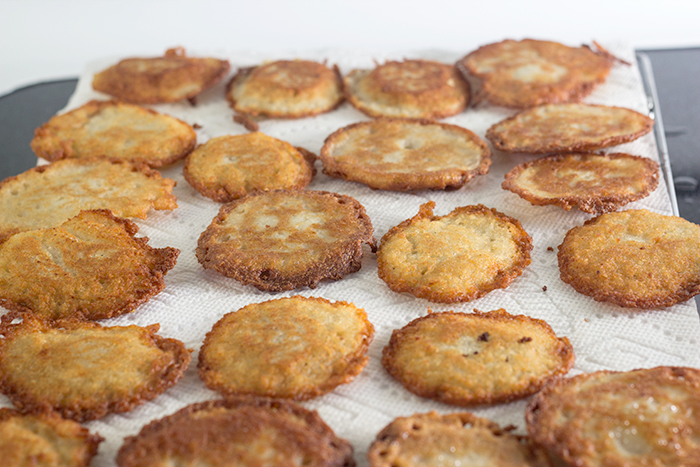 When they’re done, place the potato pancakes on a wire cooling rack lined with paper towels to absorb any excess oil.

When placing the first pancake, I usually flip it over onto the paper towels to make sure the underside is golden brown. 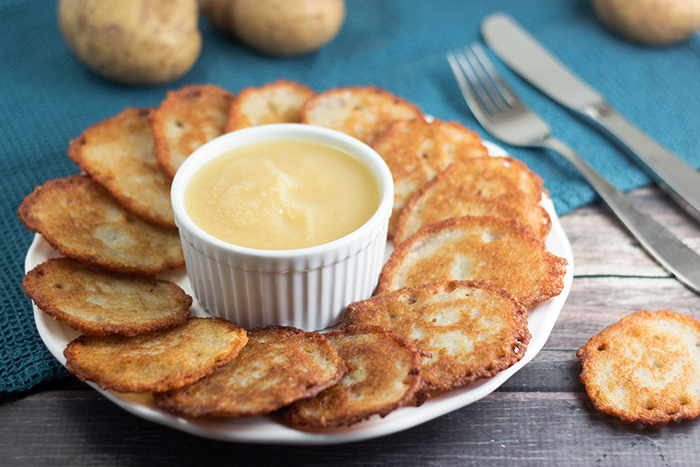 Serve them while their still hot to make the most of their awesome crispiness.

Any leftovers keep fine and taste just as good, but they just won’t be crispy. That’s not a bad thing, unless you’re me since I adore the crisp. Have I mentioned that enough yet? 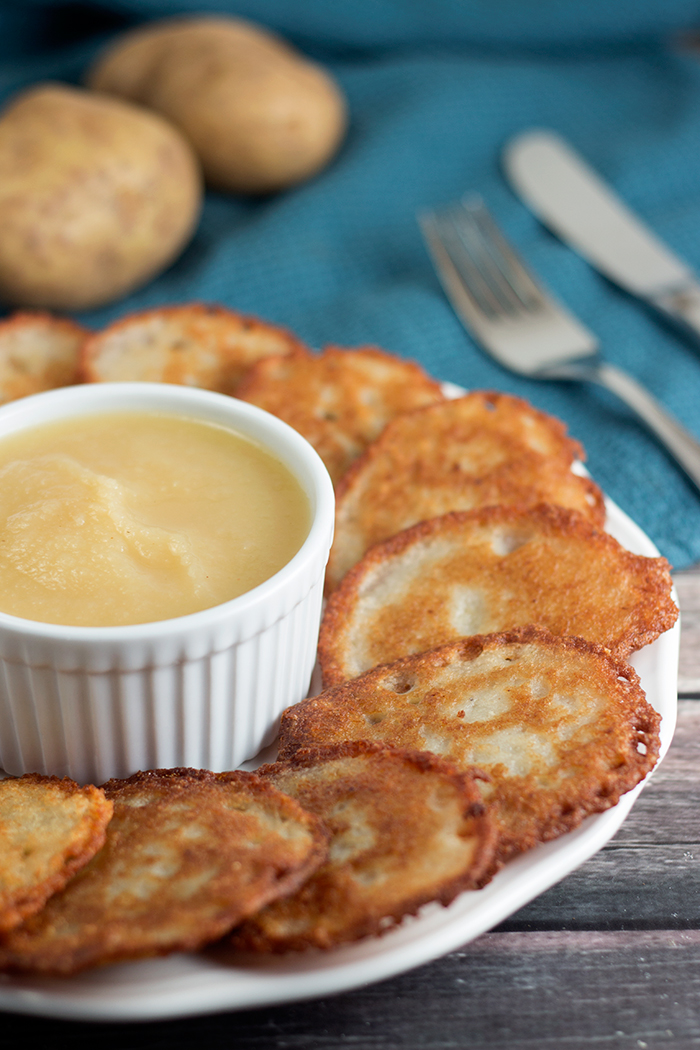 I have successfully halved this recipe by using half of a beaten egg (the other half goes in the dogs’ dinners). Then it makes the perfect amount for the two of us for a light, meatless dinner that we eat with a salad.

Tell me that you’ll try these with applesauce at least once, okay? They’re so delicious that way. 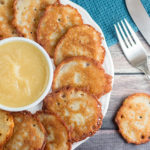