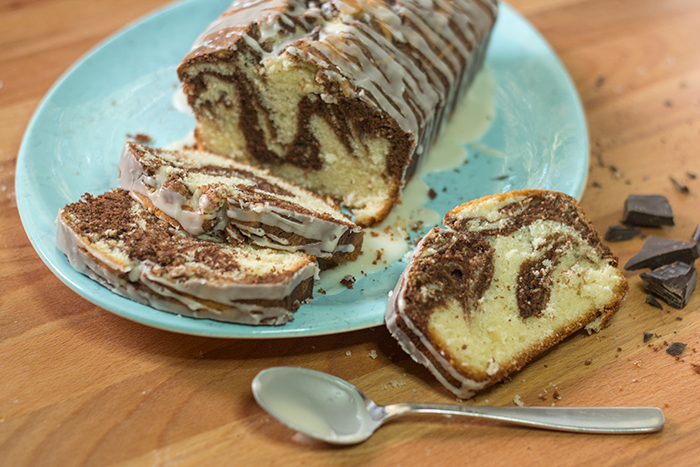 I’ll admit that in my childhood I wasn’t terribly fond of marble cake as I always found it a little boring and rather dry. Recently, I decided to see if that was still the case and whipped one up.  Yup, it was still dry. Tasted good, but I thought it could be better.

I quickly become kind of obsessed with the idea of making a moist version with more flavour. I tried different recipes, pans, baking times, temperatures and varied some of the ingredients. After more tries than I care to count, I found one that I can honestly say I love.

Traditionally, this is made in a bundt pan or springform pan, which makes for a rather large cake. That’s great for company but when it’s just two of you, a smaller one is better. That way you’re not eating the same cake for over a week. Fine for some cakes but this one tastes best within the first 3 – 4 days.

So, here’s my smaller version! 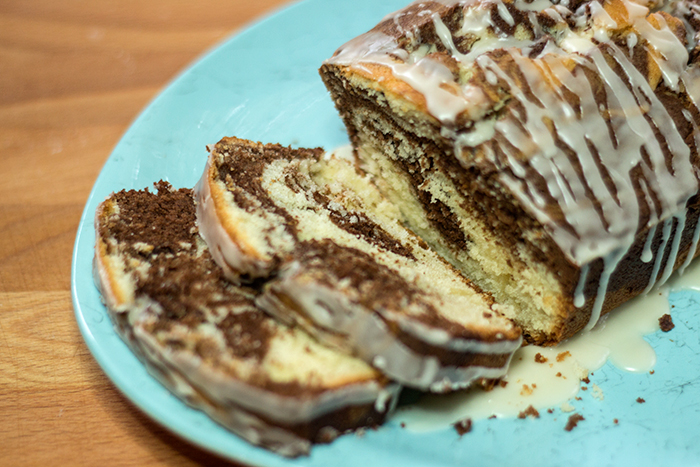 *Room temperature ingredients (butter, eggs, milk and yogurt) make for best cake texture but the butter is the only one that’s mandatory.

This cake isn’t that hard, but it does take a little bit of set up. Trust me, it’s worth the effort.

With all the times I made it over the last several weeks, I found it easier to everything ready before I started the mixer. It likely doesn’t make much difference to the end product but it does make the mixing part go a lot quicker!

So, here are my four prep steps I take before I turn on the mixer: 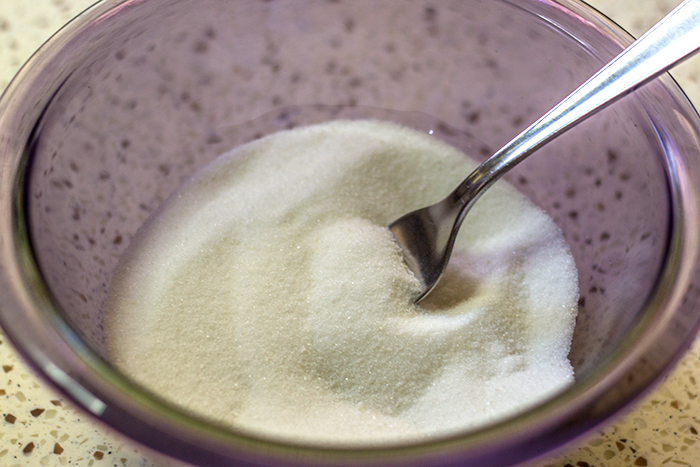 If you don’t have vanilla sugar, just use 1 teaspoon of vanilla extract. However, add it later with the other wet ingredients (milk, rum and vanilla yogurt).

Thoroughly whisk together 1 1/2 level teaspoons of baking powder and 1 cup of flour in a separate bowl. 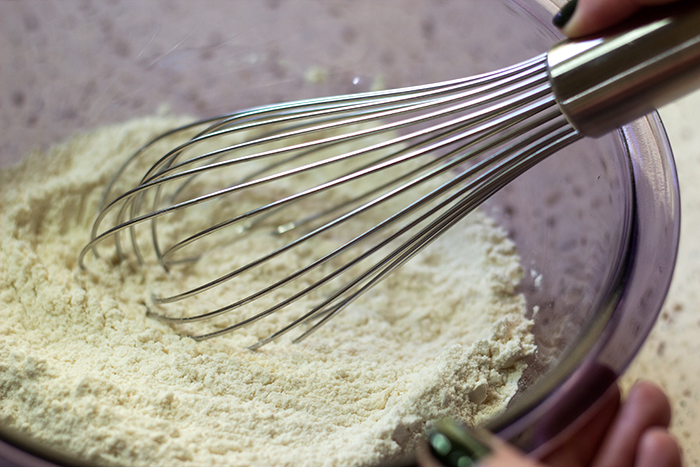 The whisking part is important because it helps lighten up the flour, which will help create a lighter texture to the cake. You can also do this by sifting the two together.

Coarsely chop up 2 ounces of chocolate. Melt the chocolate and set aside to cool down. 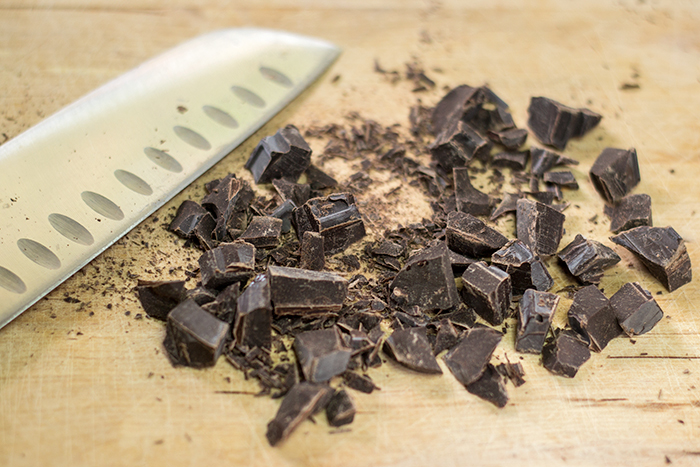 I recently discovered a really easy way to melt chocolate on the stove. No double boilers required! 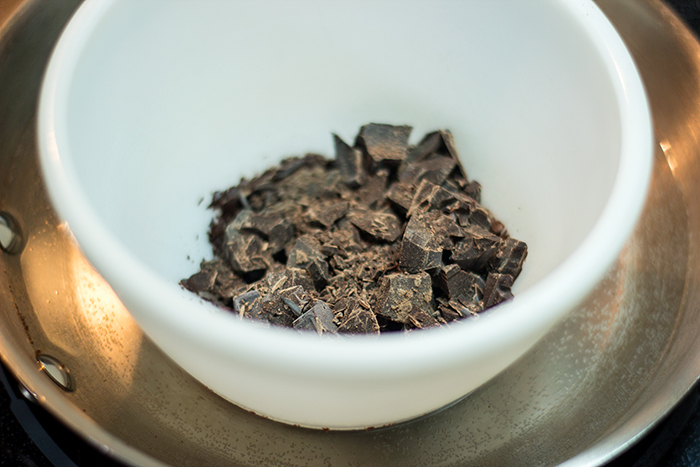 Place a small, heatproof bowl in small saucepan filled with 1 inch of water. Bring the water to a simmer and stir until melted. 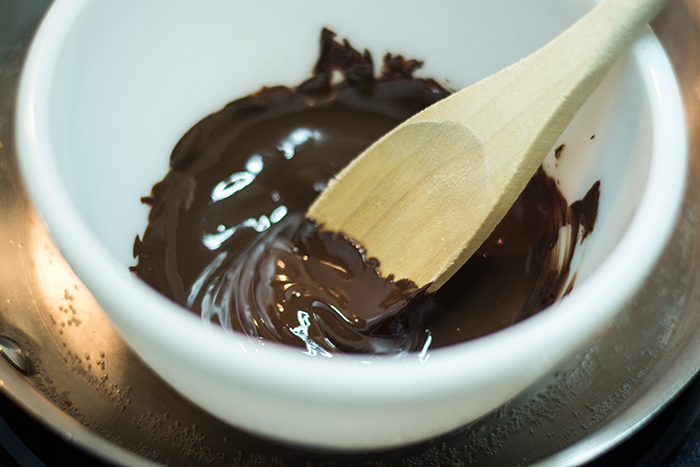 Grease a 8×4 glass loaf pan with the butter wrapper. Might well since it’s just going to be thrown out. 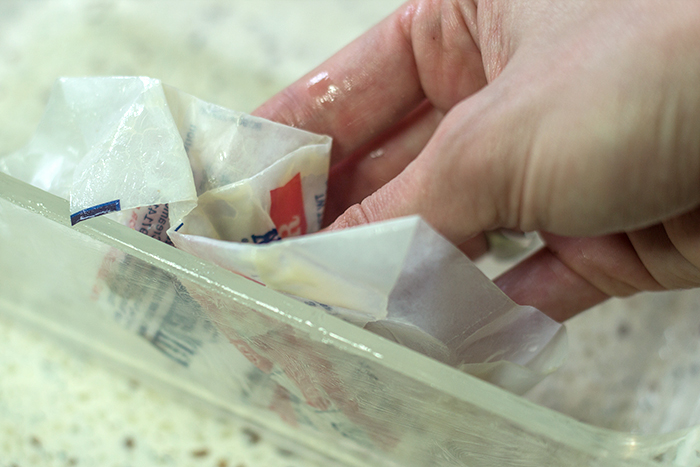 Oh, and yes, I’ve already plopped the butter into my stand mixer bowl.

Cream the butter on high until it’s soft. 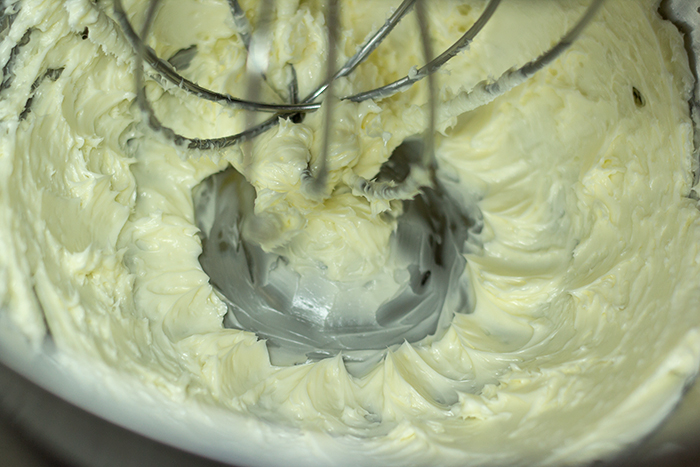 Gradually add the sugar mixture to the butter, little by little, until the mixture is pretty smooth. 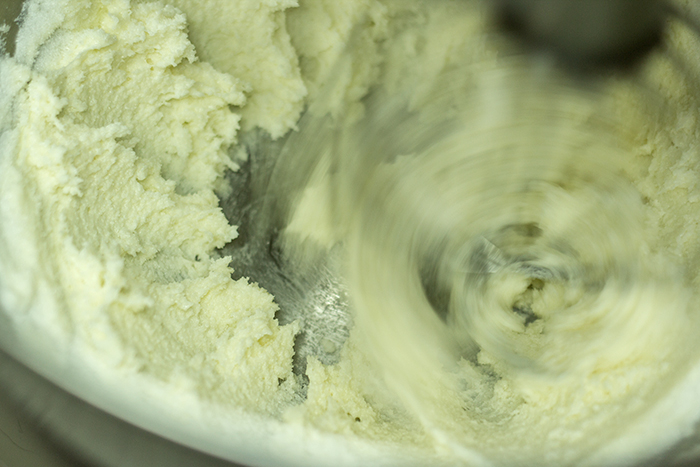 Next, add the eggs in one at a time. Beat each egg into the batter for 30 seconds on a medium setting until it’s thoroughly incorporated. 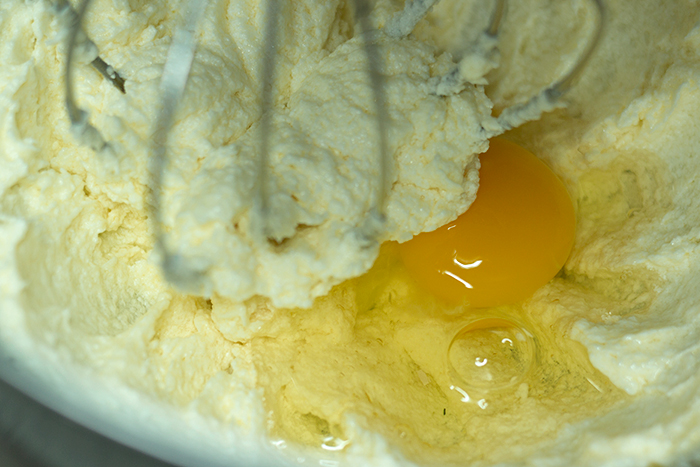 Now we’re going to alternate mixing in dry and wet ingredients on a medium setting:

The order in which you do the wet ingredients does not matter. 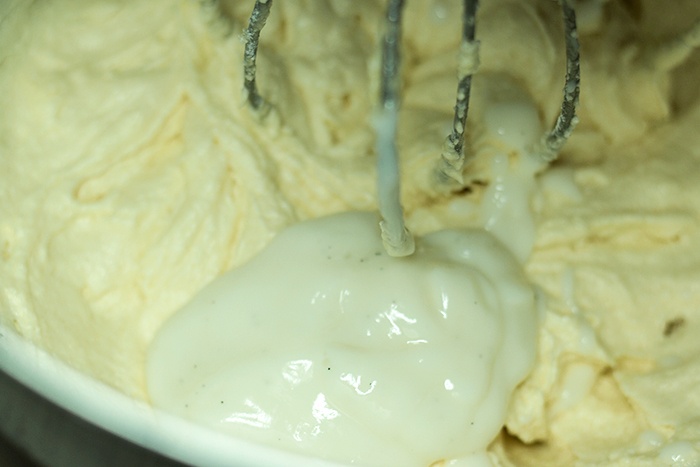 It should look something like this when it’s all mixed. 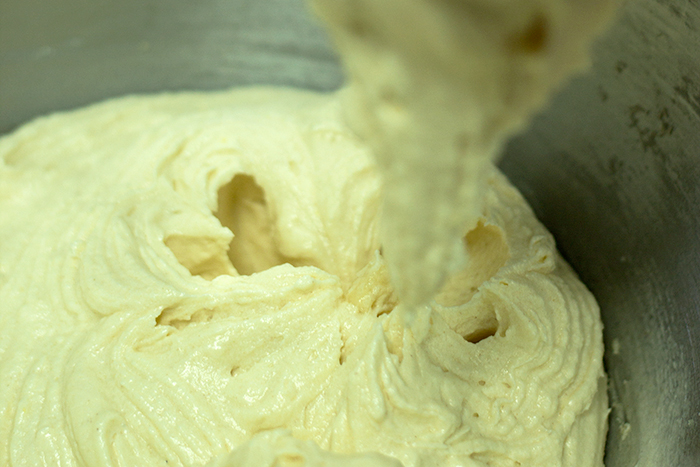 Okay, so next we divide the batter into three parts. You can do only two, if you want. I just do three because it creates a nicer marbling pattern.

Put about 1/3 of the batter into your greased loaf pan and another 1/3 into a bowl and set aside. I just eyeball it and I’m sure it’s never exact. 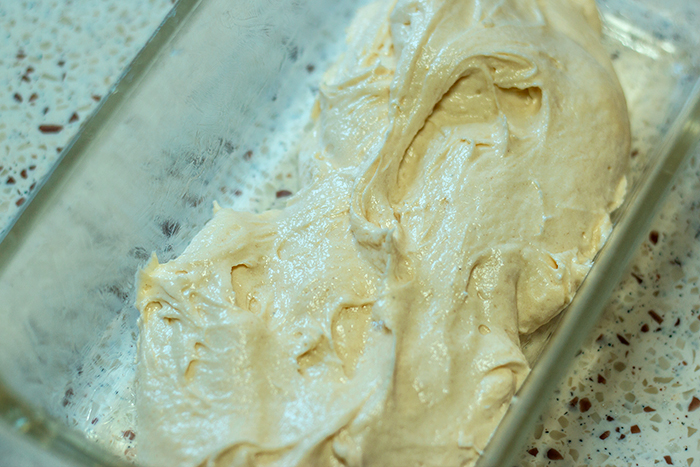 With the remaining batter in the bowl, we’re going to add the following: 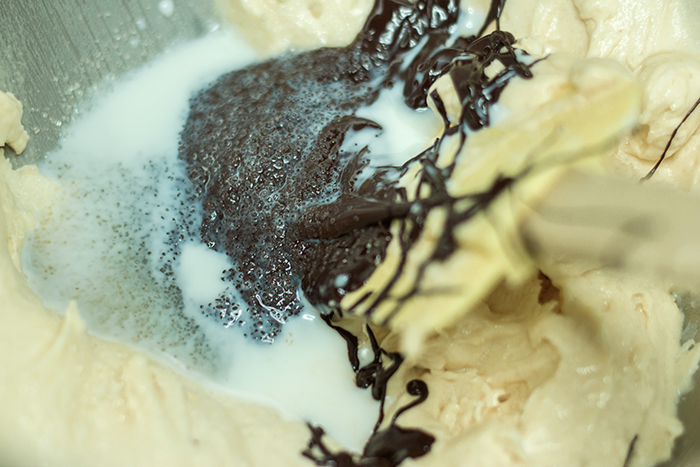 You can mix it with the electric mixer again, if you want. I just fold it in with a spatula since it’s such a small amount of batter. 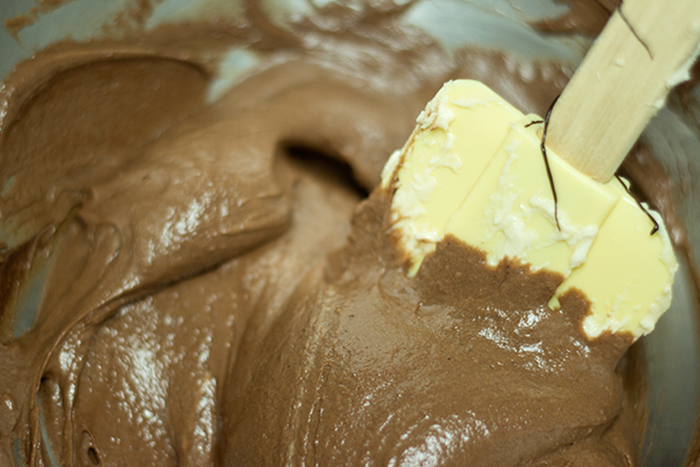 Put the chocolate batter on top of the vanilla in the loaf pan. 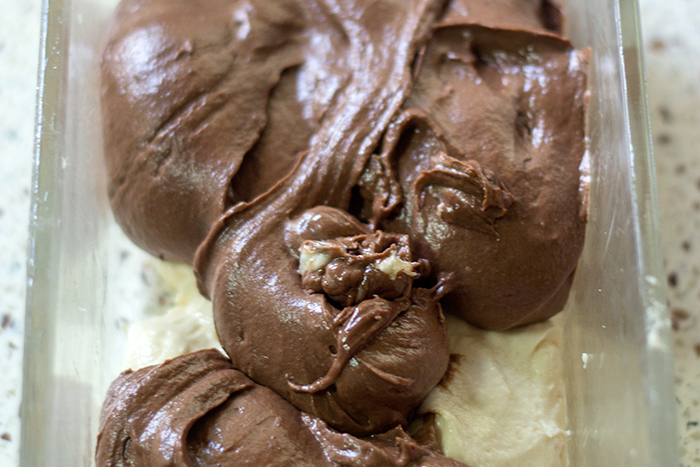 Next, put the remaining vanilla batter on top of the chocolate. 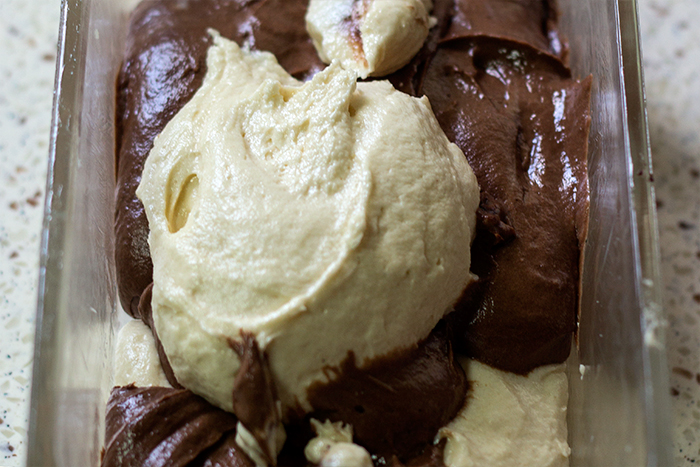 Lastly, we gently combine the layers by swirling a fork in spirals or a “S” pattern through the whole pan.

Be careful not to over swirl! 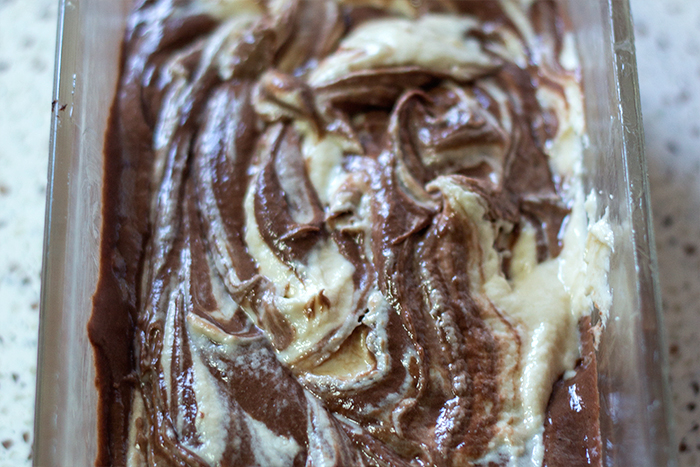 Bake at 350 degree for 45 – 50 minutes, or until an inserted toothpick comes out clean. Keep an eye on it during the last 5 – 10 minutes because it can dry out quickly.

(If you’re a dark metal loaf pan, reduce the baking time by about 10 minutes.)

Let it cool on a rack for 10 minutes in the pan and then you’re free to gently remove it.

Lastly, we make the glaze while we let the cake cool off. This part is completely optional. I actually like the cake without the glaze just as much as with it.

While I’m giving you my recipe, this isn’t an exact science for me, unfortunately. I really just eyeball the ingredients and mix until I get the desired consistency. However, here’s the recipe that was the base for mine – Basic Sugar Glaze. 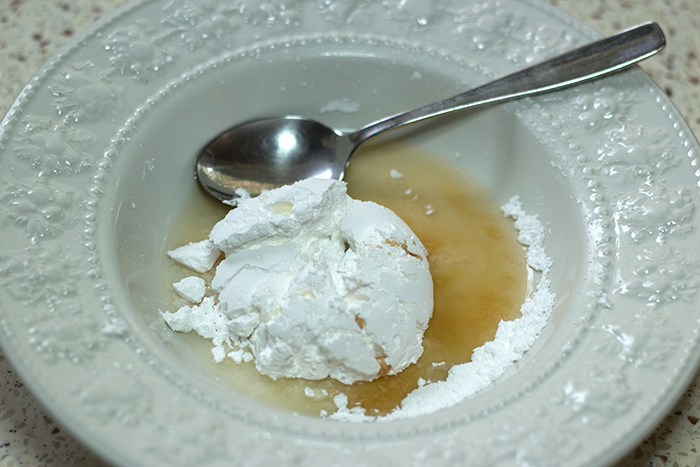 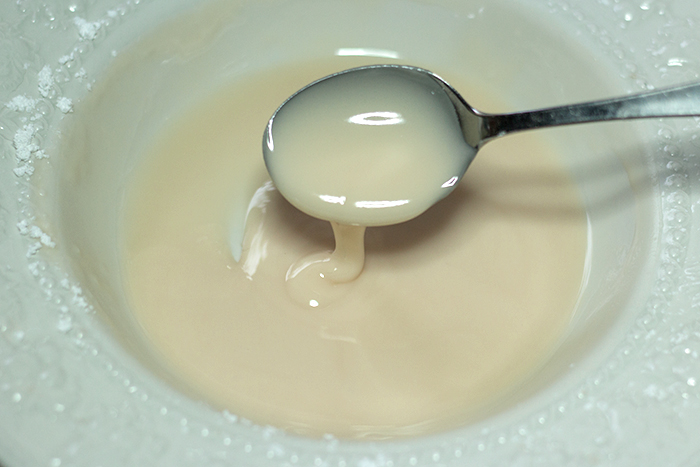 This glaze is extremely adaptable. Here’s some other ideas you could use for the liquid part:

When your cake has cooled, drizzle it with the sugar glaze. 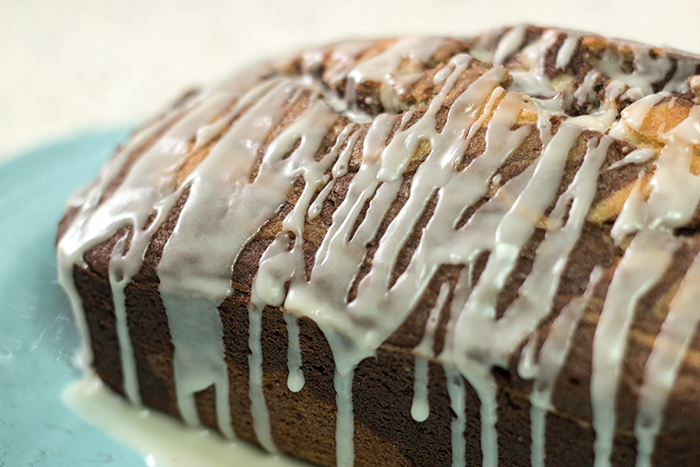 And there you have it – a slightly complicated but extremely delicious, moist marble cake! 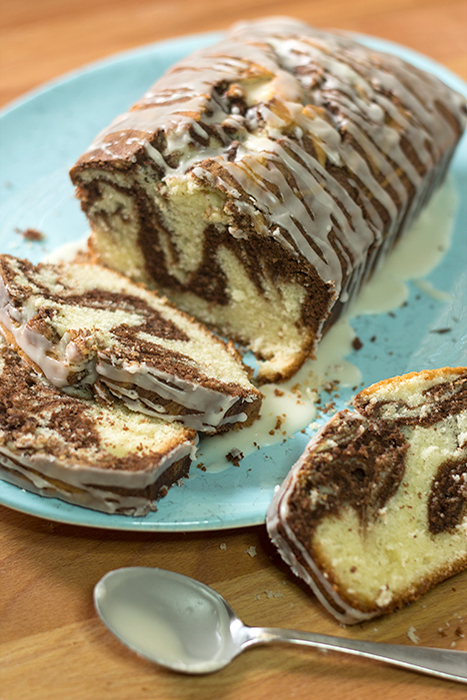 Go ahead, slice off a piece and enjoy it right away. It’s best when it’s fresh out of the oven. 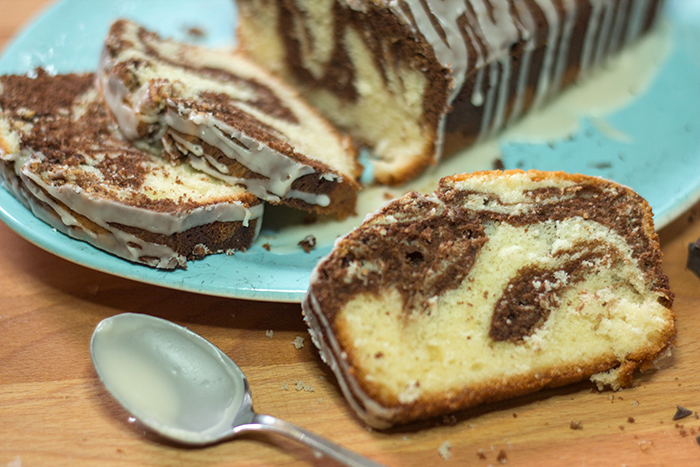 Then invite over some company for social afternoon coffee! 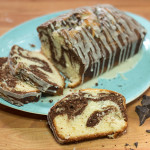 Best when eaten within the first 3 - 4 days.
Having all ingredients at room temperature makes for the best texture but butter is the only one that's mandatory.