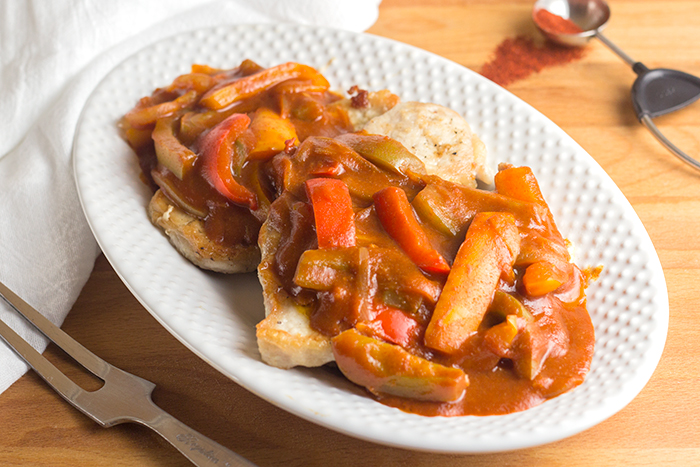 A paprika sauce like this used to be easily found in German restaurants, or at least it was in Bavaria. However, it isn’t quite as popular anymore but I still adore it. If you do find it on a menu, it’ll most often be in schnitzel section of the menu as a Zigeunerschnitzel, where it’s served over either a breaded or plain pork schnitzel. There are lots of variations of this paprika sauce and they can include mushrooms, tomato chunks, German wine vinegar or sometimes even pickle pieces. However, the flavour and look I’m after here is what I remember tasting while eating at German restaurants within Franconia and I think it’s darn close.

What to call this sauce in English is something I mulled over for quite some time. Spicy Paprika Sauce describes it but isn’t a real translation of the German name, Zigeunersosse, which breaks down to Zigeuner, meaning “Gypsy”, and Sosse, (or Soße, if using the German alphabet) meaning “sauce”. Some English speaking folks will already this as just “Gypsy sauce”, since it does sometimes gets translated literally.

So why did the name require some thought? Over recent years I’ve become aware that the term “Gypsy” isn’t accepted by everyone due to it sometimes having negative connotations. No, I’m not trying to be “too PC”, I’m just trying to be nice. That’s important to me. In my recent research I read that was a push in 2013 by the Central Council of German Sinti and Roma to have this sauce renamed to either “Hungarian style” or just paprika sauce, as I have it here. It didn’t work out, though. I guess it’s really is hard to rename a sauce or dish that’s over a century old and has such strong recognition with its current name.

On a different note – would it be helpful if I gave out my version of phonetics for German words in my posts? Here’s an attempt: Zigeunersosse – tse-GOI-nair-ZO-seh.

Does that make it pronounceable? Maybe. Maybe not.

Either way, it doesn’t change how tasty this sauce is! 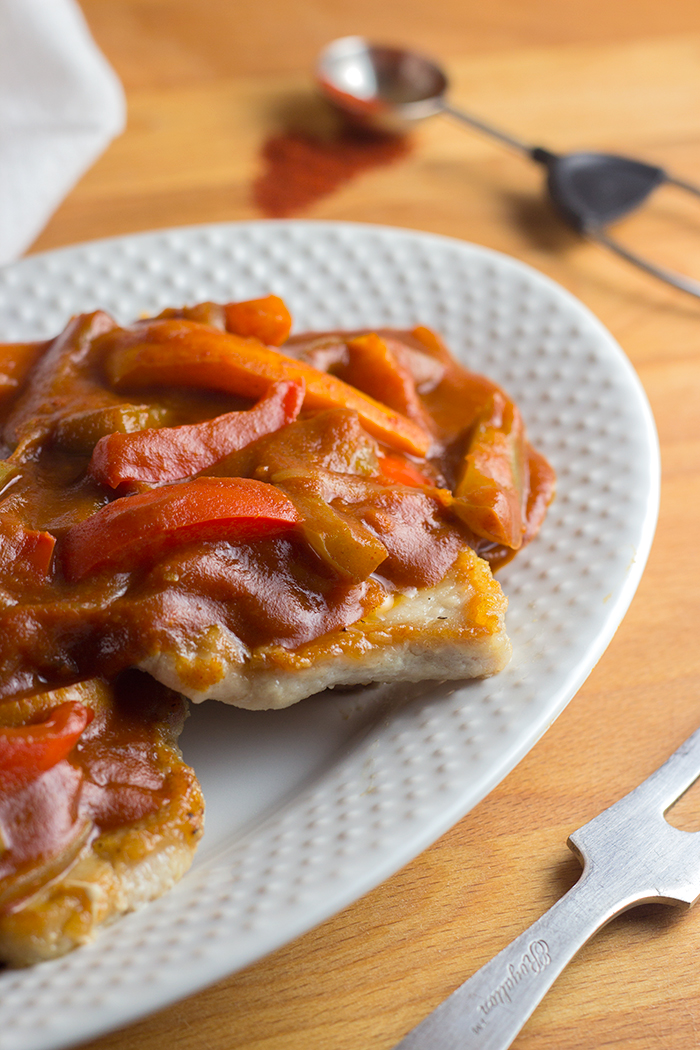 While it’s traditionally served over a pork schnitzel, I feel like it also goes with pan fried chicken breasts, pork chops, over potatoes or rice. The latter could make it work with a vegetarian dish.

Lastly, the flavour profile is quite similar to some Hungarian goulashes or the German version of Shashlick. If you like those, you’ll like this! 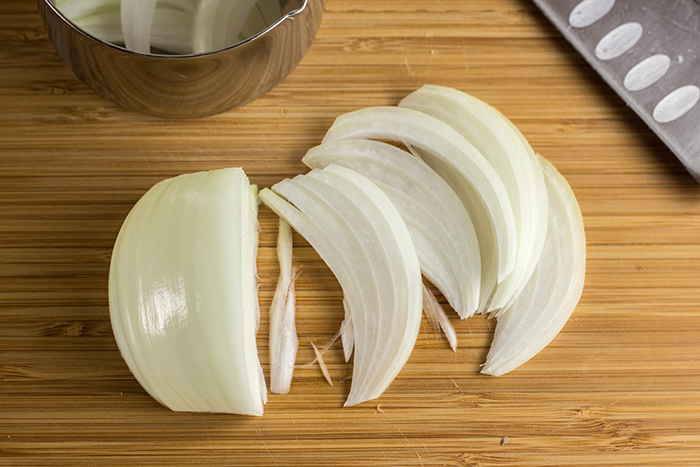 First, lets start out with our 1 cup of vertically sliced onions. Vertically slicing makes for a prettier looking sauce once the onions have cooked down and become soft. Slicing rings is certainly another option.

If you need a refresher course on how to vertically slice onions, Cooking Light has a great one here. 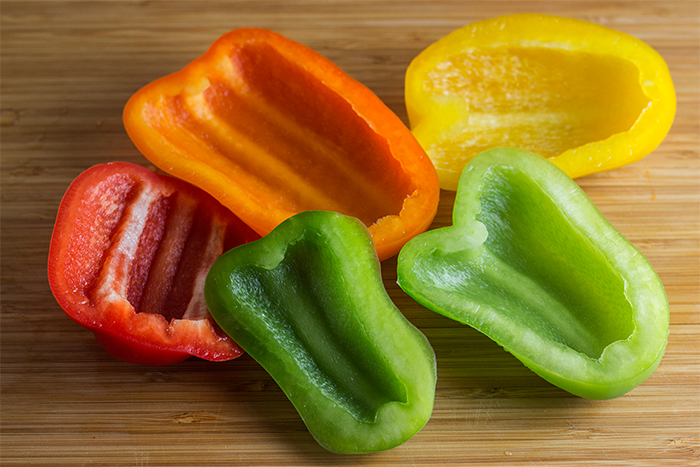 Next, we start slicing up the bell peppers. 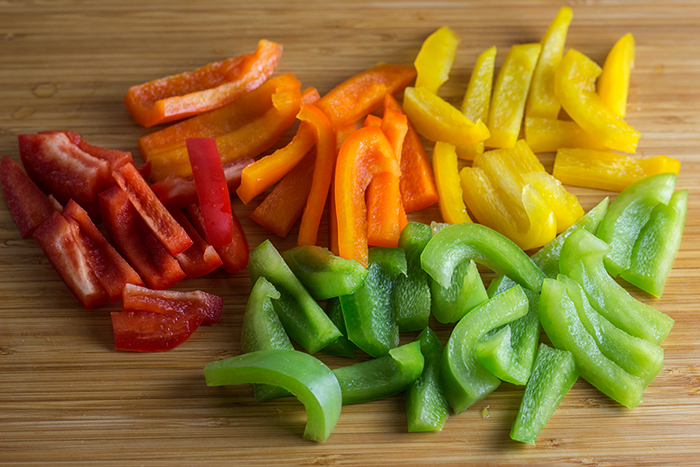 Slice them into strips and then cut the strips in half. You can leave them whole, if you want the peppers to stand out even more in the sauce.

You don’t have to use all four colours, like I am here. I just think they make the sauce look even prettier. The usual combination is red, orange and yellow. 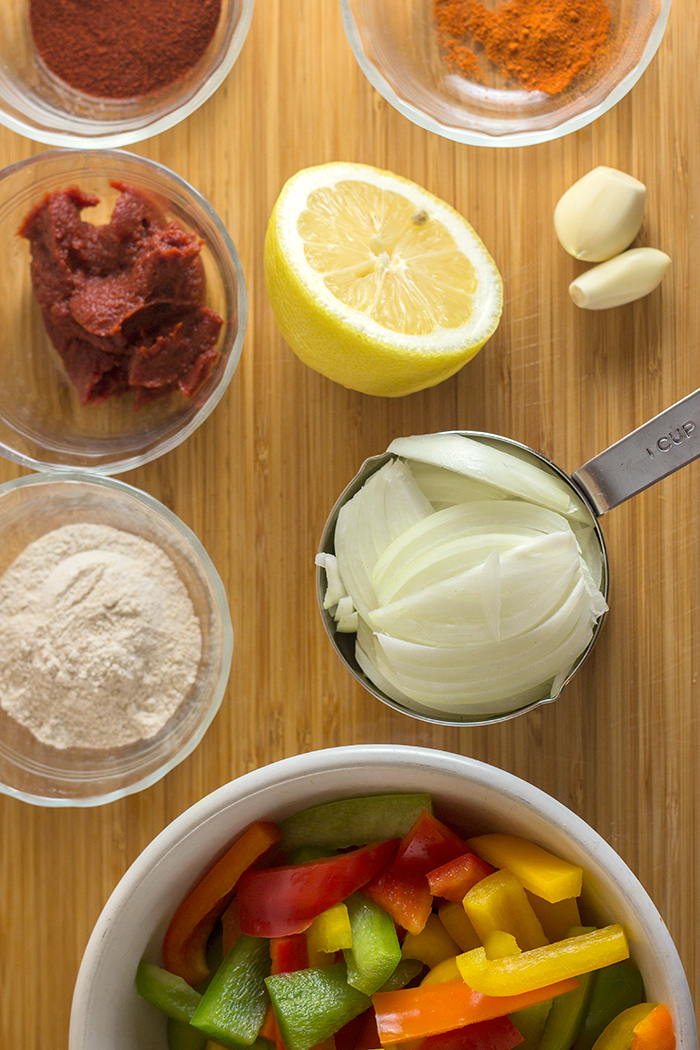 Now gather all your ingredients together – the 2 Hungarian paprikas, flour, garlic cloves, tomato paste and lemon juice. Apparently, the only one I failed to picture here is the honey. 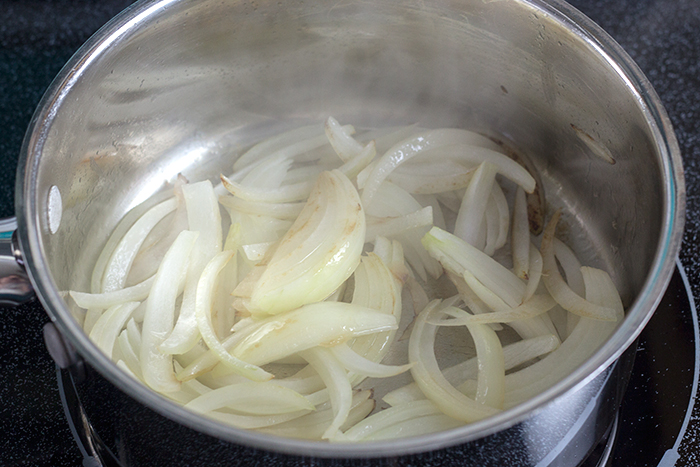 With some warmed oil in the pan, start by sauteing the onions on medium for 5 minutes or until they start to get soft and turn start to brown. 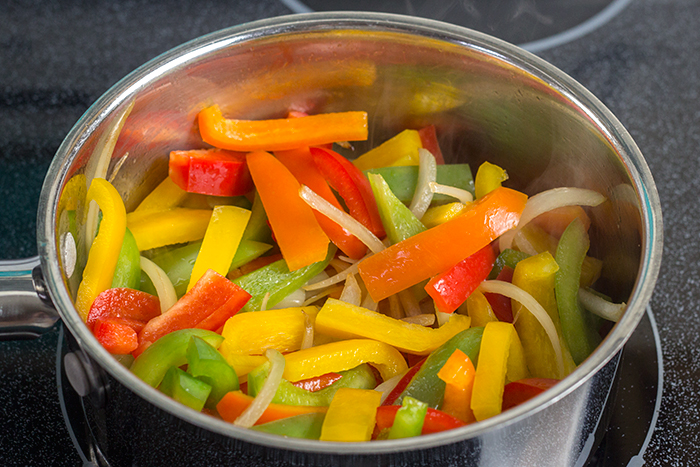 Add the peppers and give it a good stir. Cook for an additional 2 – 3 minutes. 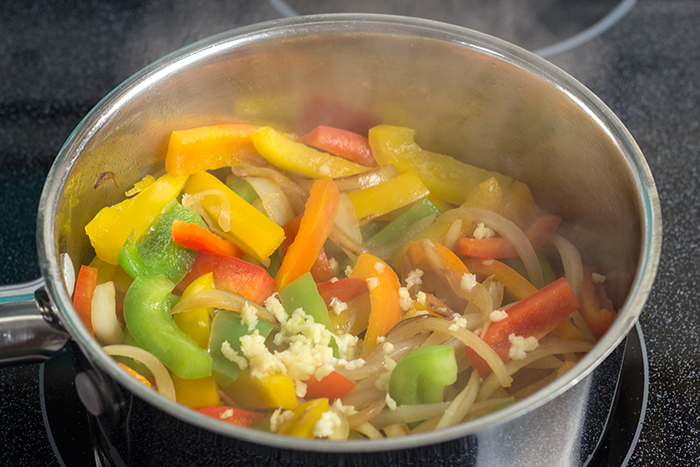 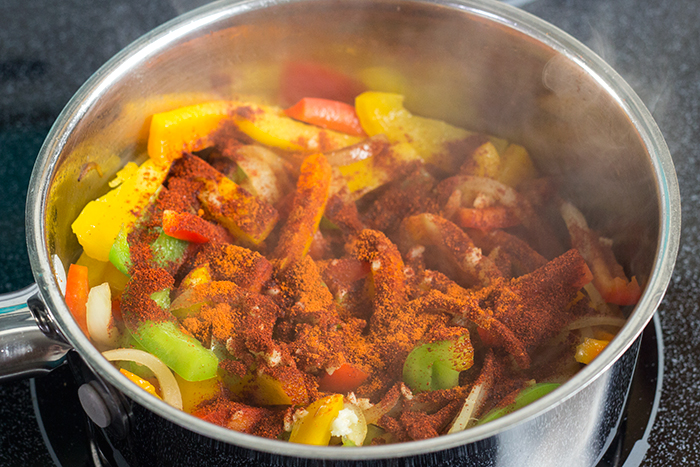 Both sweet and hot ground paprika… 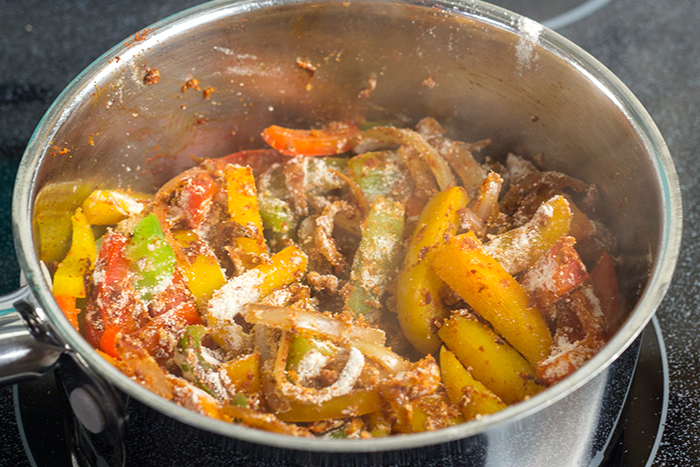 And add the flour. Stir the garlic, paprika and flour together with the onions and peppers. 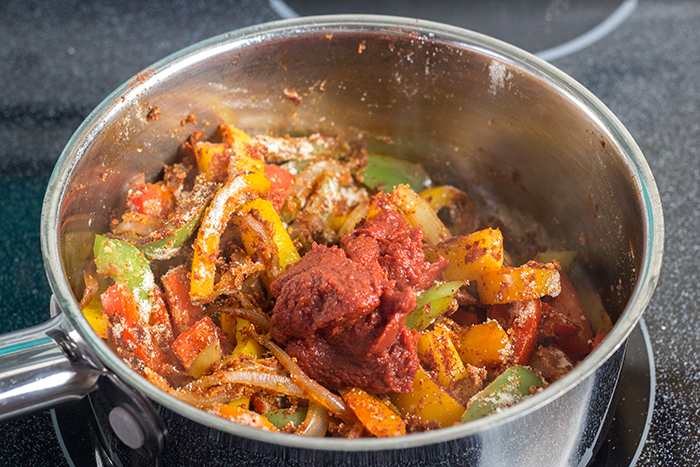 Add the tomato paste and stir together. 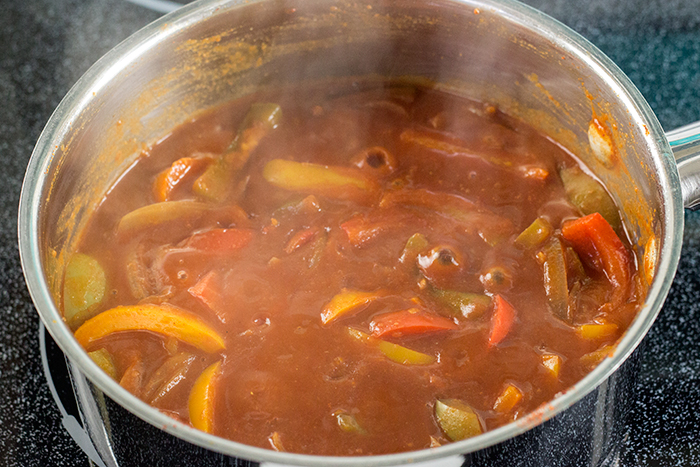 Right after the tomato paste, add the broth (either veggie or chicken) little by little. Stir after each addition.

Once all of the broth is added, stir everything until it’s thoroughly combined. Reduce the heat to low and let it cook gently for 20 minutes. By the end of that, the sauce should have thicken up but still be very pourable – think more like a gravy. If you’re familiar with Zigeunersosse, the sauce won’t quite have its signature flavour yet here. That comes next.

Add 1 teaspoon of lemon juice and 2 teaspoons of honey and stir to combine. I usually start with this but often adjust by adding up to 1 more teaspoon of each to get the flavour down right. Also, adjust the taste with a little salt (and pepper), if you so desire.

I’m sorry that I don’t seem to have an exact measurement with the lemon juice and honey because it depends on how sweet your raw bell peppers are to start. 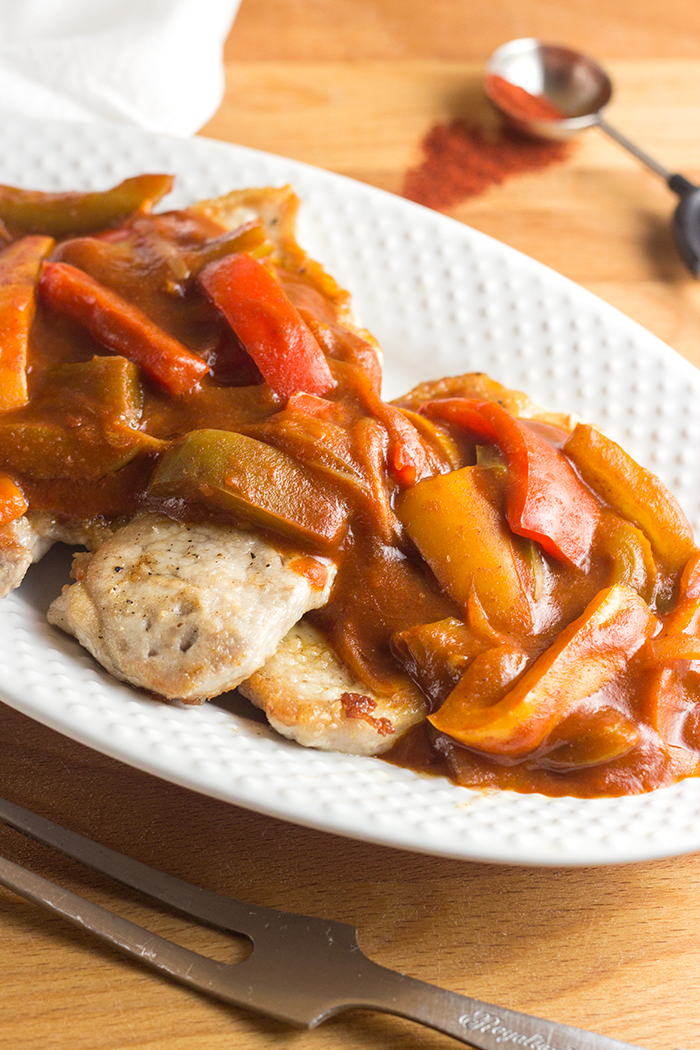 There you have it. A beautiful, spicy paprika sauce that pairs well with pork, chicken, potatoes or rice. I’m serving it here over thin, pan fried pork chops with a side of brown rice. 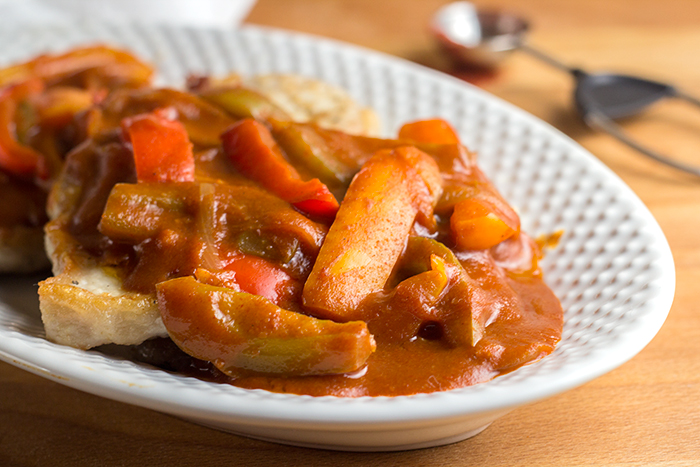 Looks like I already have dinner made for tonight! Enjoy, my friends. 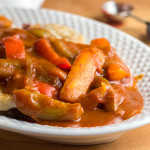