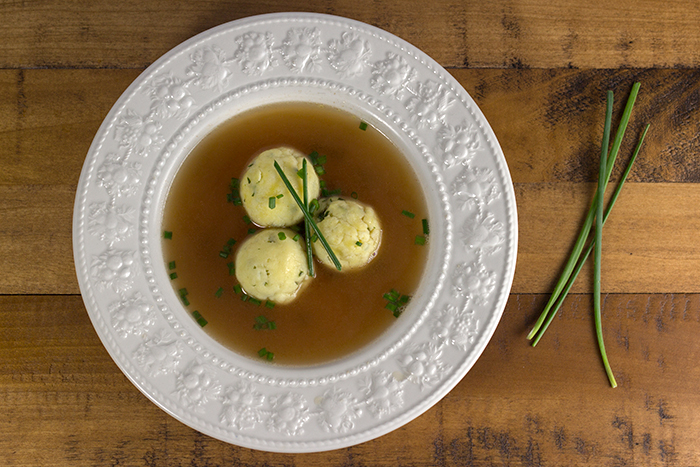 The semolina dumpling is traditionally served in an appetizer soup called Griessnockerlsuppe (or, you guessed it, semolina dumpling soup). It’s a common dish found in restaurants throughout Bavaria and down in Austria too. While these dumplings have their very own soup, they can also be found in other soup recipes, like Festtagssuppe, which basically translates to Festival Day soup. It’s is often served at weddings and holidays and has a lot more complicated additions like bone marrow dumplings and/or liver dumplings, so we’ll talk about that another time.

The ingredient list for semolina dumplings is pretty simple. It’s just semolina flour, butter, egg, salt, grated nutmeg and a pinch of baking powder. If you’re feeling fancy, you can also add a tablespoon or two of chopped flat leaf or Italian parsley. The traditional broth is a simple, clear beef, but you could easily make this vegetarian by switching it to a vegetable.

These dumplings come in two shapes – a small, round ball or 3 edged oval that I’ve sometimes seen referred to as a quenelle. The latter technique is harder to master as it required scraping it back and forth between two spoons to form the 3 edges but here’s a bit of video that shows that technique in action. With either shape, the dumplings are made small as they double in size during the cooking process. Since they’re homemade and take practice to perfect, don’t worry about making them the perfect shape. They’ll turn out however you make them as long as you make them all around the same size. Promise.

Overall, these semolina dumplings are light, fluffy but really quite filling. They’re perfect when you when you’re looking for something that’s not going to sit too heavy. If you’re going to serve them as an appetizer, I recommend only adding 3 – 4 to the broth. If you want the soup to be the main meal, as we’ve been having it lately, add about 4 or more, depending on how big your appetite is. Make sure you garnish each bowl with 2 – 3 chopped chives to make it authentic! 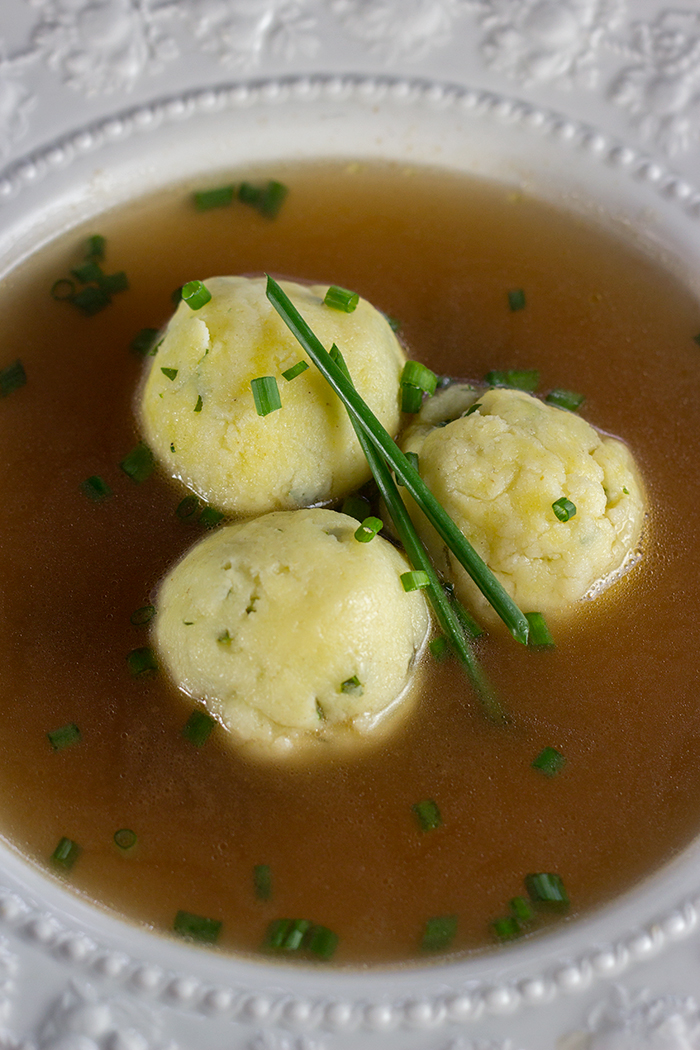 The best flavour for the semolina dumplings comes when you cook them directly in the broth. However, well salted water is a better place to start because you’ll likely end up with bits of semolina dough floating around in the water on your first few tries.

Also, any extra dumplings you might have keep really well in a tightly sealed container in the fridge for a few days. In fact, I think they taste better on the second day. 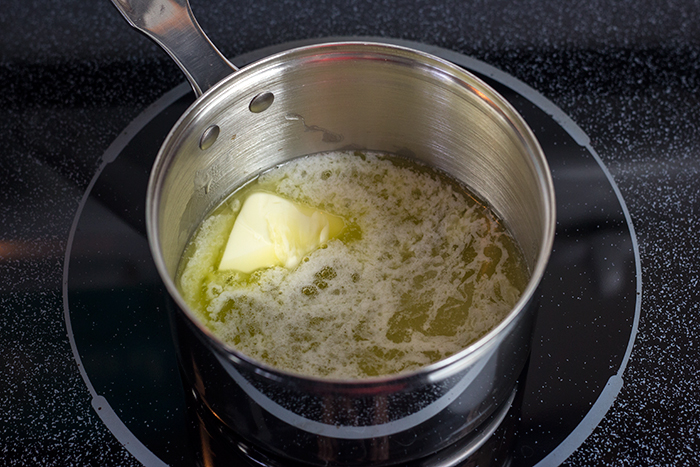 Melt the butter on the stove in a small pot. Once it’s melted, I let it cool down before pouring it into a medium bowl.

You can make this with just room temperature butter too. I tried it both ways and found the flavour to be better when it was melted first. 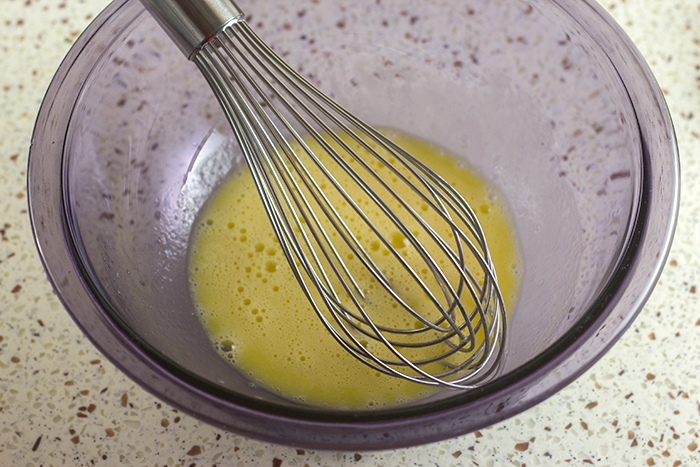 Crack one egg into the bowl and whisk together until bubbles start to form – usually about 2 – 3 minutes. 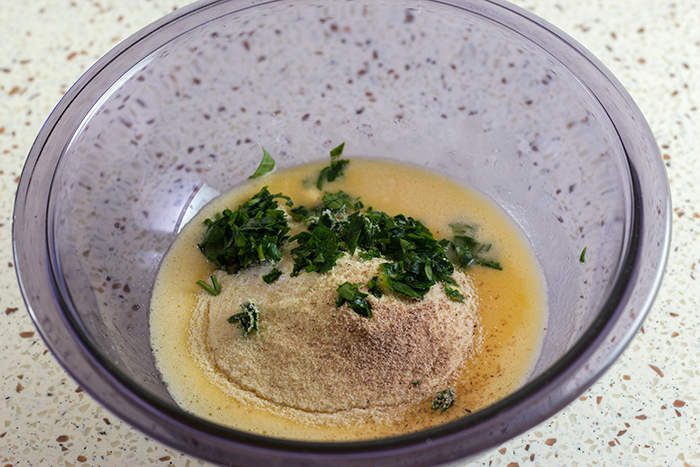 Add the semolina flour, salt and chopped parsley, if you’re using it. Also, grate in a generous amount of nutmeg atop everything.

If you don’t have a nutmeg grater or don’t know what they look like, here’s a link for one that works great. You could probably use the zester section of a box grater as well, provided that the pokey-metal-hole bits aren’t too large. Honestly, with German cooking you always want to have some whole nutmeg on hand. 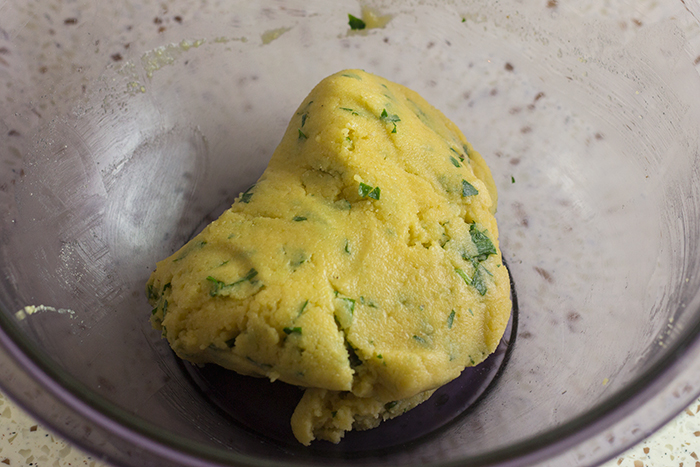 Mix everything together with a spoon until it becomes a nice, slightly sticky, yellow dough ball. Let it all meld nicely for 15 minutes.

While the dough is resting, bring a large pot of well salted water to a boil and then reduce the heat to medium – medium low. 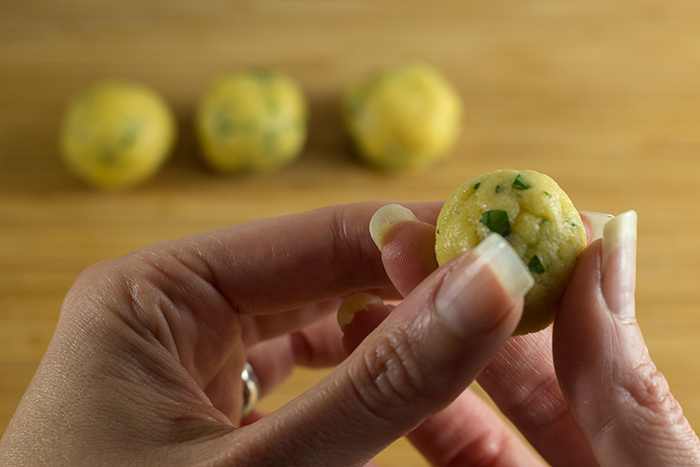 Lightly form smooth balls with your finger tips. The trick is to smooth out the shape without too much pressure. It’s better to use your finger tips versus rolling them in your palms because the latter tends to results in firmer dumplings. However, I imagine that just cooking them longer will soften that up but I haven’t tried it yet. Maybe next time I’ll test that out more. 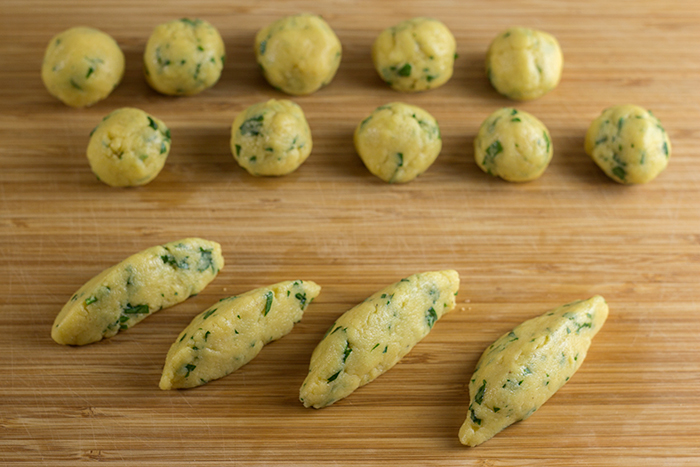 If you want to try making them into the ovals, try out the spoon technique I posted the video of above. Since I’m a sculptor at heart, I found it easier to make the shape using my fingers and the cutting board to get the flat side. I just keep flipping them and smoothing with my fingers until I got a relatively close shape.

If you find the dough too pliable or wet to work with, you can always stick it in the fridge for 10 minutes or so. I don’t get the impression that it hurts to let the dough rest longer as I found older recipes that let it sit for minimum of 30 minutes. 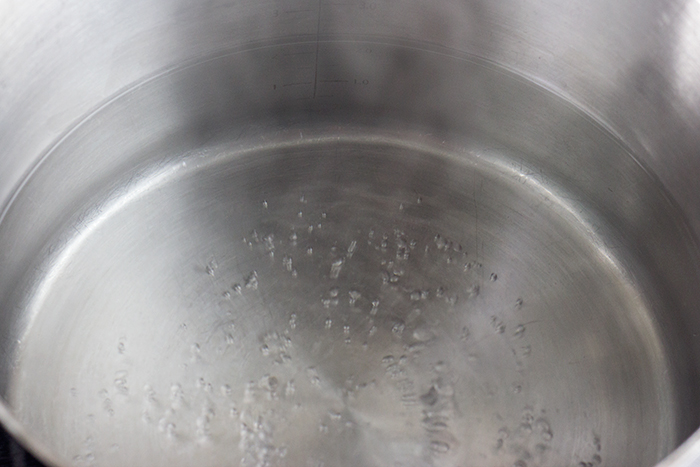 Make sure the water is at a high simmer but not boiling. Boiling has a tendency to tear off bits of the dumplings so that you end up with very messy dumpling water. 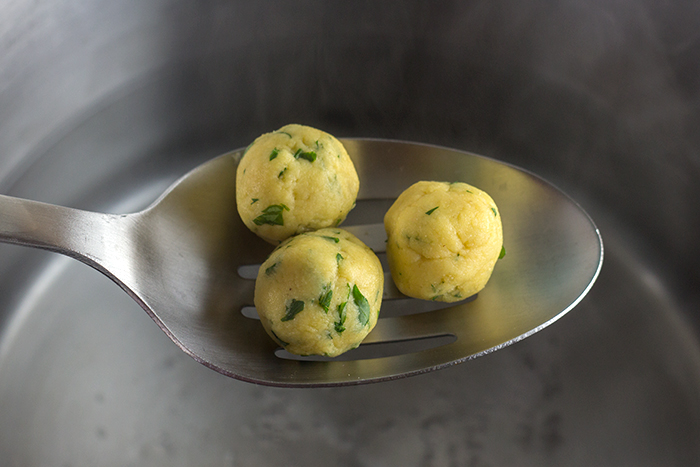 Gently place the dumplings into the hot water with a slotted spoon.

It helps to dip the spoon in the hot water first so that the dumplings don’t stick to the spoon. 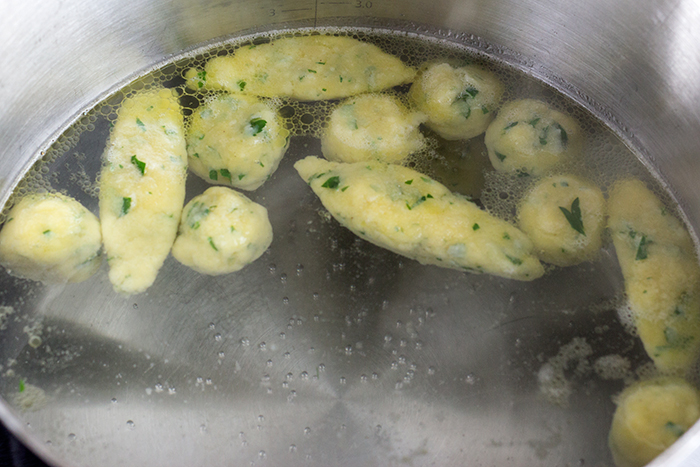 Cook the dumplings for 5 minutes on medium heat. At this point they will have risen to the top. 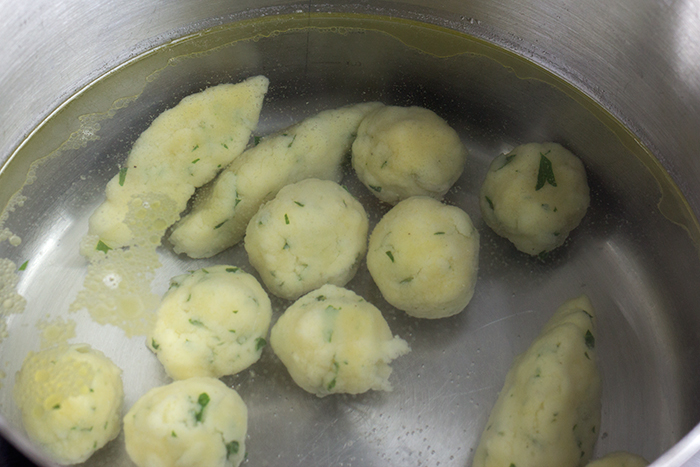 Reduce the heat to low and cook for an additional 15 – 20 minutes. You’ll find that they sink to the bottom again as they become heavier. 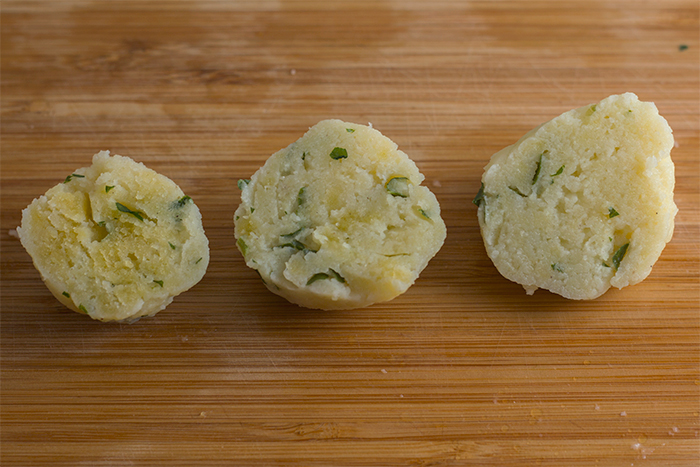 At minute 15 I like to take out a test dumpling and cut it in half. If it’s still somewhat firm or the center is still a little darker than the outside, I let it go for 5 more minutes or until they’re soft all the way through. Go for soft, not fall-apart-mushy.

In this photo above I have “not done”, “almost done” and “done”. You can tell that they get a larger as they continue to sit in the warm water. 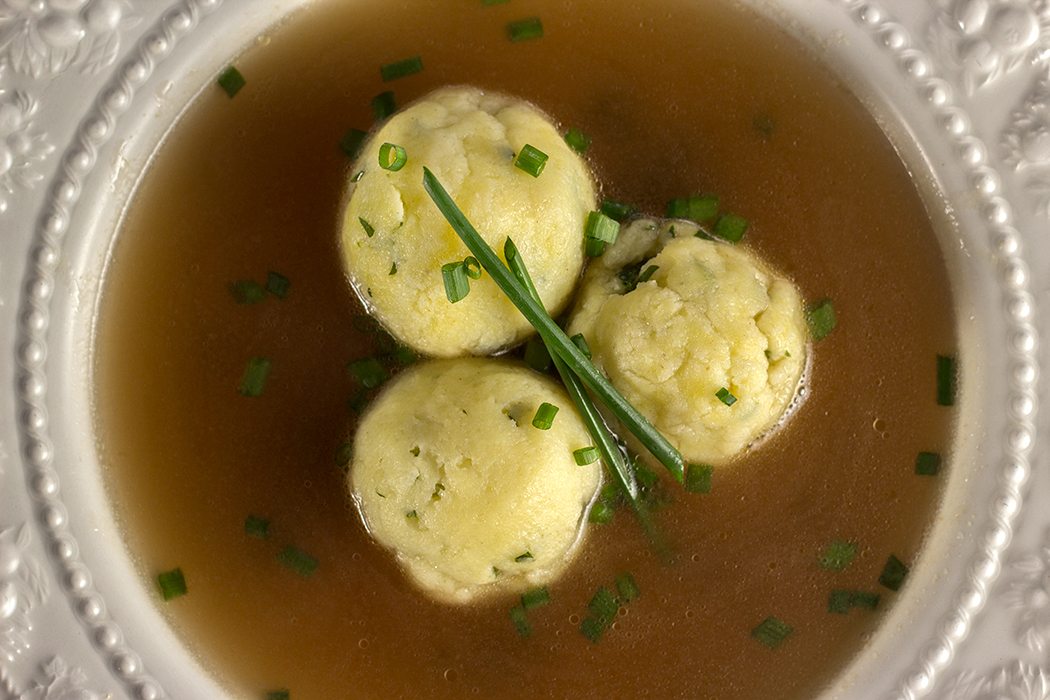 Remove the dumplings from the water and place desired amount into soup bowls. Ladle hot broth over the dumplings and garnish with 2 – 3 chopped chives. 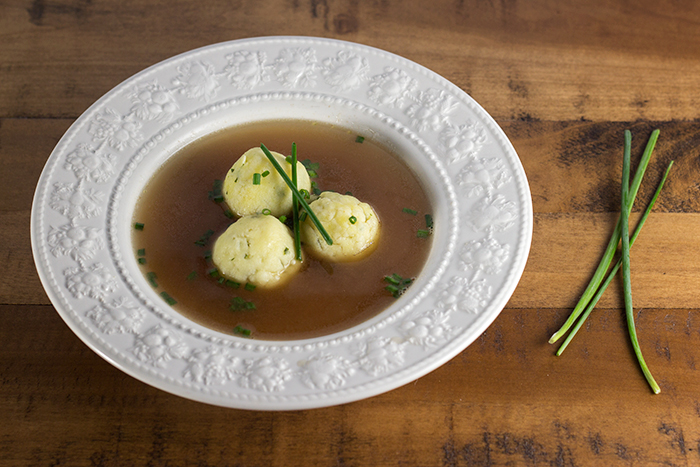 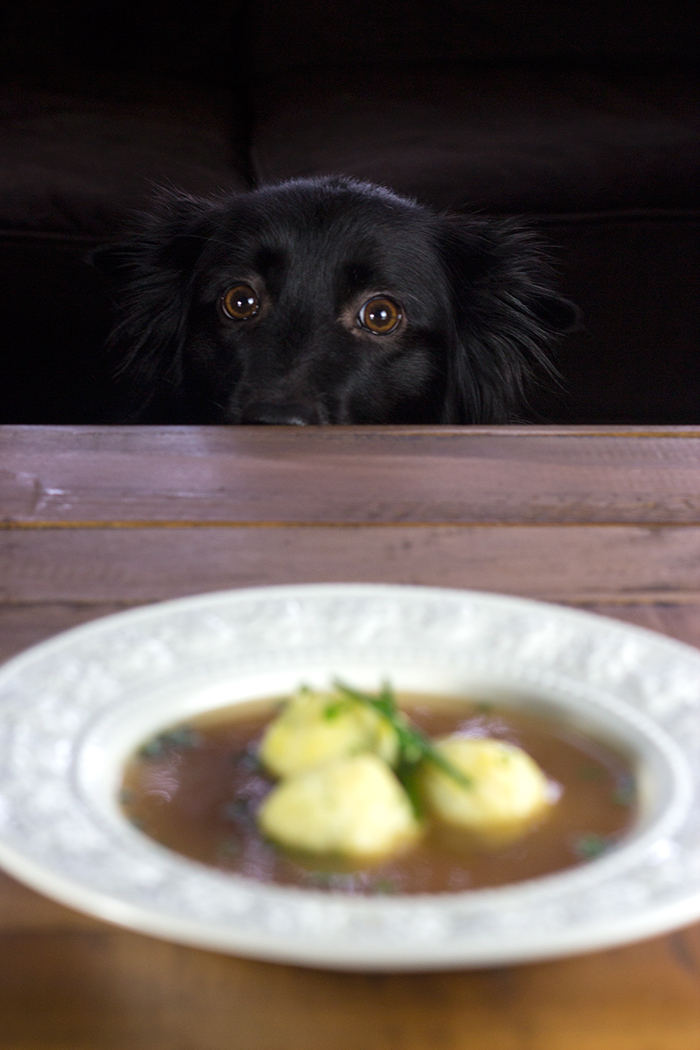 Looks like Tui wants some semolina dumpling soup too. Couldn’t resist snapping a photo when she was walking around my little photoshoot table.

Enjoy, my friends. Let me know what you think in the comments below!

Disclosure: The Kitchen Maus may be compensated in exchange for your clicking on links posted within this page. It’s never for anything we don’t personally use already. 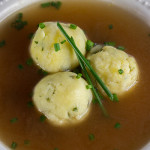 The best flavour for the semolina dumplings comes when you cook them directly in the broth. Well salted water is the best place to start because you’ll likely end up with bits of semolina dough floating around in the water on your first few tries.
Extra dumplings you might have keep really well in a tightly sealed container in the fridge for a few days.