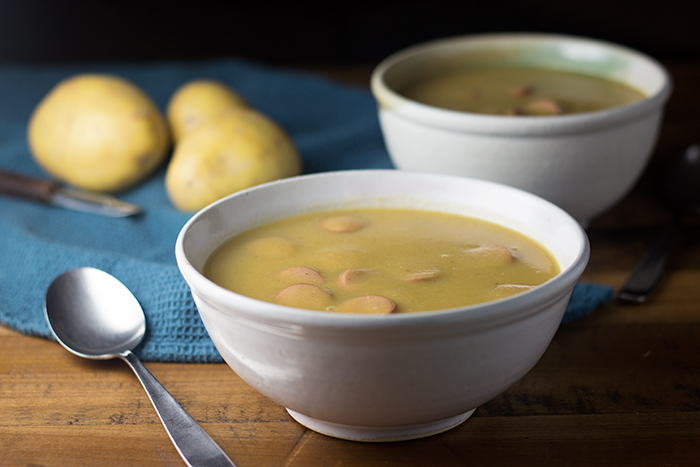 Classic German Potato Soup is the last installment of my vegetable soup recipe trio.  This is the soup my parents made when wedding guests were crowding into their tiny apartment in Germany this past September. It’s hearty, oh-so-delicious and easy to make in a large amounts. Since then, I’ve had several requests for the potato soup recipe from the American bunch, so it just had to be included into the trio.

It’s not a vegetarian soup in any sense of the definition but it can be, if that’s what you need. My folks did modify a portion of theirs to be vegan to meet the dietary needs some of our guests. They simply omitted the animal fats. So, it’s totally doable.

The most authentic flavour comes when you go unabashedly full fat. Doesn’t it always? The secret here is to add in the fat from the cooked bacon (or the Speck). That’s right, we’re just going to pour all the bacon fat right into the soup. Let’s just stop worrying about our waistlines for a minute and revel in how good bacon makes things taste. Seriously, it’ll be worth it, especially if we all go for a few long walks afterwards. 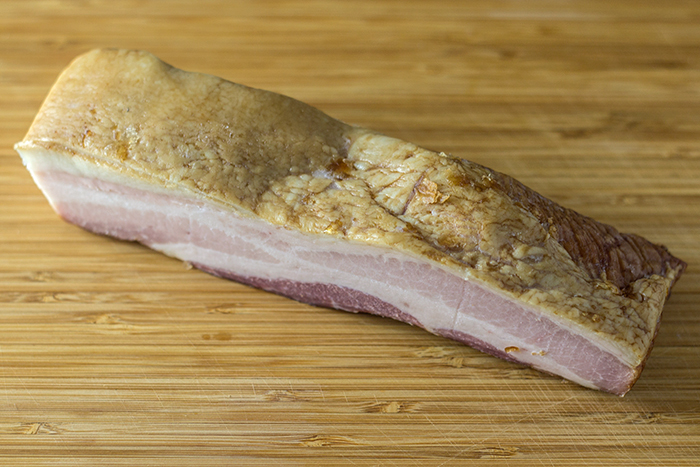 I know I’ve mentioned in previous posts that Germans have Speck instead of bacon. It’s always the best option as the flavour really is different. However, it seems to be virtually impossible to find in the States. Much easier to just go with thick cut bacon. I did recently find out I could ask for unsliced bacon at two nearby locations – Golden Steer Choice Meats and the ever popular, Liebchen’s Delicatessen. I wanted to dice it up into cubes to mimic the look of Speck since Speck doesn’t come in slices. Let me tell you, it worked out great. The bacon from Liebchen’s (which is made by Bavarian Meats) is what I ended up using for this recipe since it’s more true to Speck being that it was dry cured. That just means there was no added water.

Man, I feel like I talk a lot about Speck on this blog. But, it’s bacon and who doesn’t love talking about bacon? Oh, wait…  All of the vegetarians I know.

One more thing to note is to be sure to use Yukon Gold potatoes. Or, at the very least, use yellow ones, okay? Seriously, white ones will just not suffice here in terms of flavour, colour or consistency. 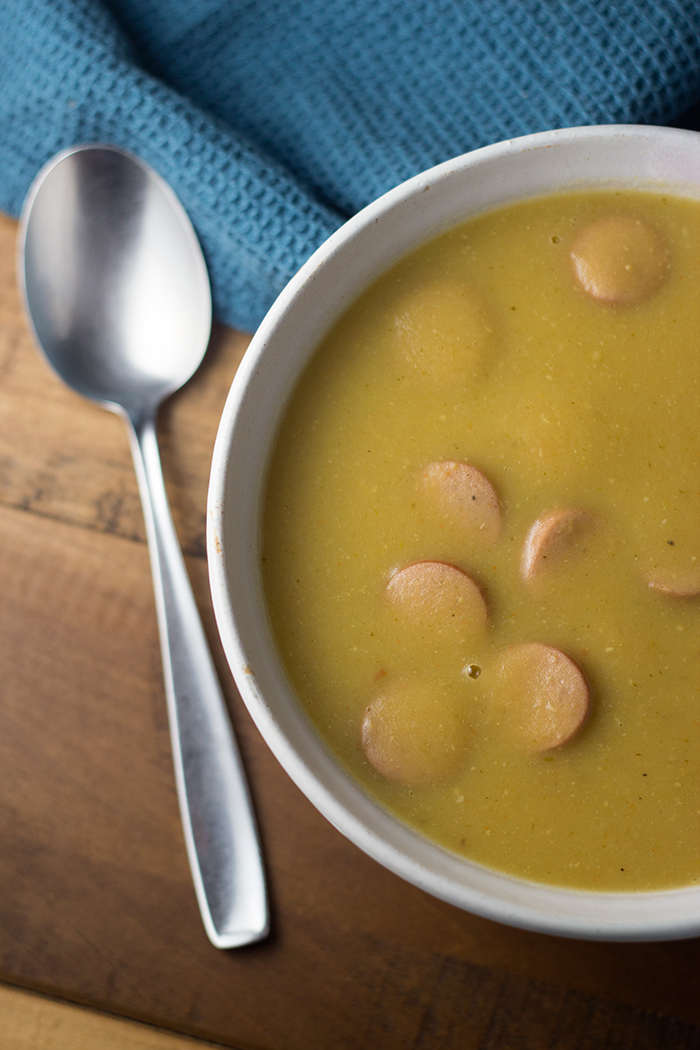 This potato soup might not be the prettiest you’ve ever had but it’s guaranteed to satisfy in terms of taste and filling you up. Once pureed, it usually come out being a slightly greenish yellow and that’s exactly how it’s meant to be. It’s also downright hearty, creamy and crammed with bacon-leek-potato goodness.

To prepare all the veggies for this soup we want to do the following: 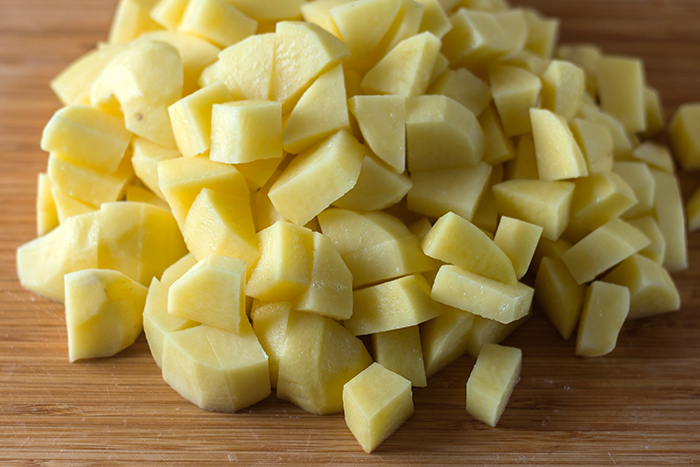 Peel and cut up all the lovely potatoes as evenly as you can.

I weigh out more than 2 lbs because once you peel off all that skin you end up with less than you’d think. 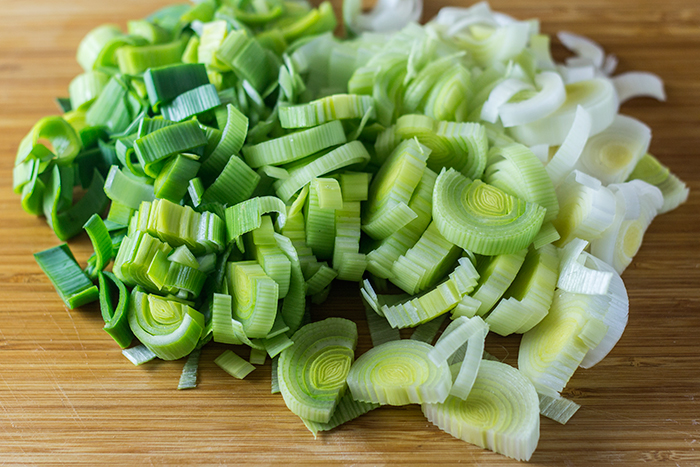 Cut the leek up the middle and wash all the grit out of the inside. Afterwards, slice both sides.

I forgot to weigh out this leek but it was almost as long as my arm and I have monkey arms. Damn, my local QFC has been getting some super leeks lately. 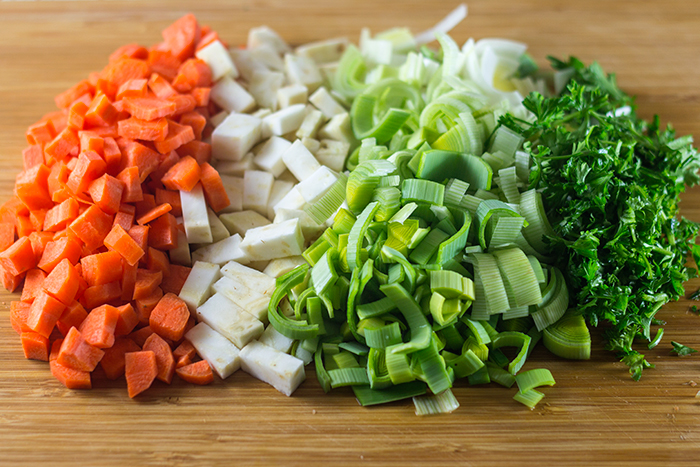 Chop all the veggies in the Suppengrün bunch. Parsley stems are optional but I usually add them.

To recap, that’s two carrots, 1/4 of a celery root, one small leek and a handful of parsley. The link above will take you to my post with more detail.

Try not to skip the celery root. It really makes a difference because I’ve made it with and without. No, just regular celery won’t work as well. It’s too mild. 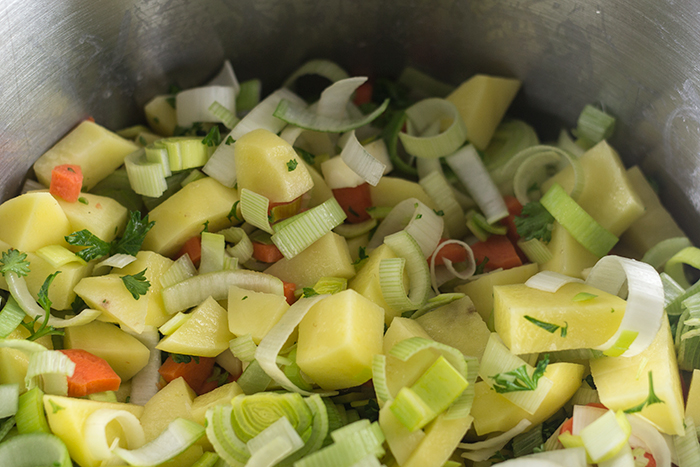 Preheat a large pot and medium and pour in a bit of canola oil. Add in all the chopped veggies and give them a good stir. 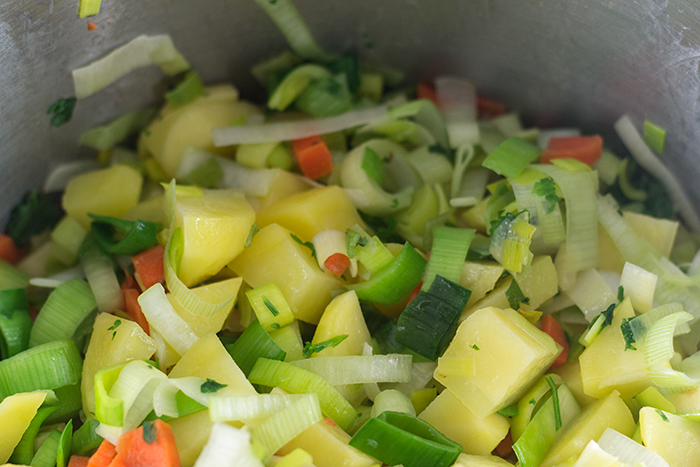 Cover and cook down for about 10 minutes until the leeks are softening. Stir often to keep the veggies from sticking to the bottom too much. 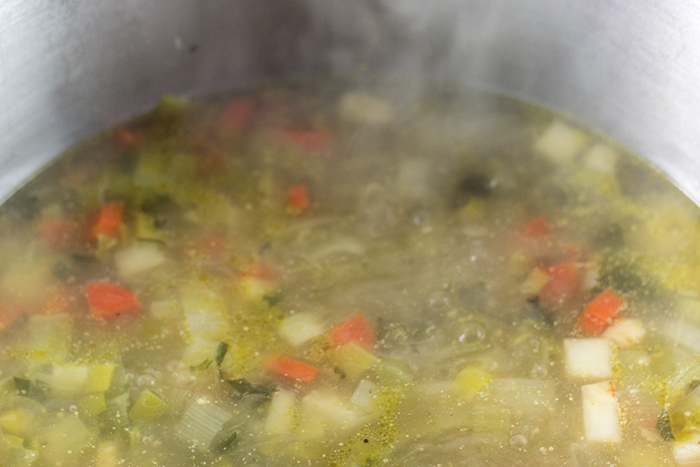 Add in the broth and let it cook covered on medium low for 20 minutes, or until the potatoes and carrots are very tender. 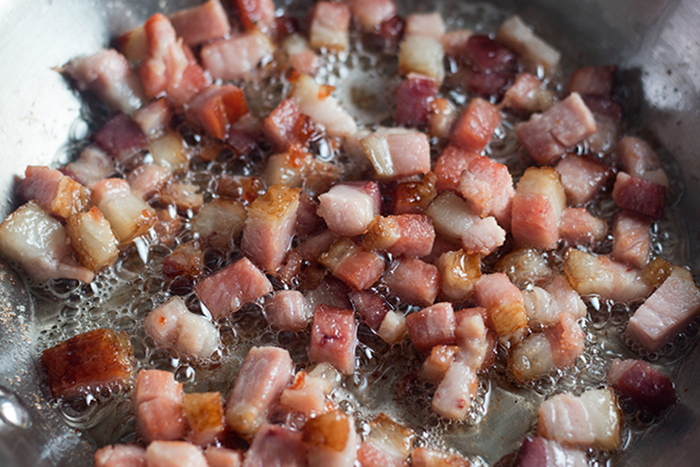 While the veggies are simmering in the broth, prepare the bacon.

If you’re using sliced, 4 – 5 of thick cut bacon either in the microwave or in a pan. Whatever works best for you. Just be sure to save that fat! Chop up the slices once they’re cool enough to handle.

If you’ve got a 5 oz piece from a slab, cube it up and saute in a pan until it’s turning crispy and browning nicely. 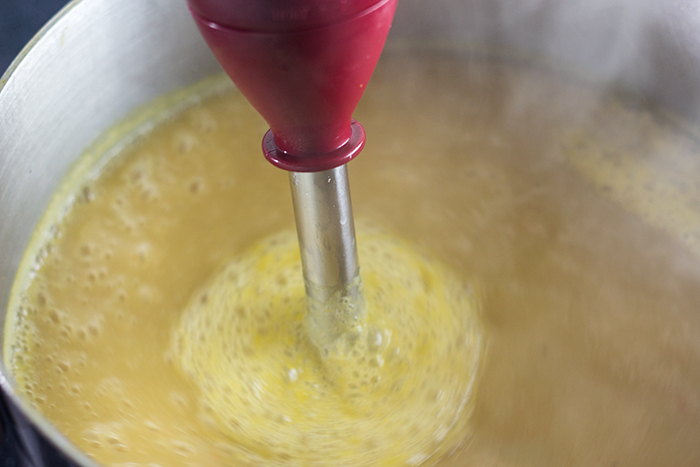 When the potatoes and carrots are soft, puree with an immersion blender until nice and smooth. 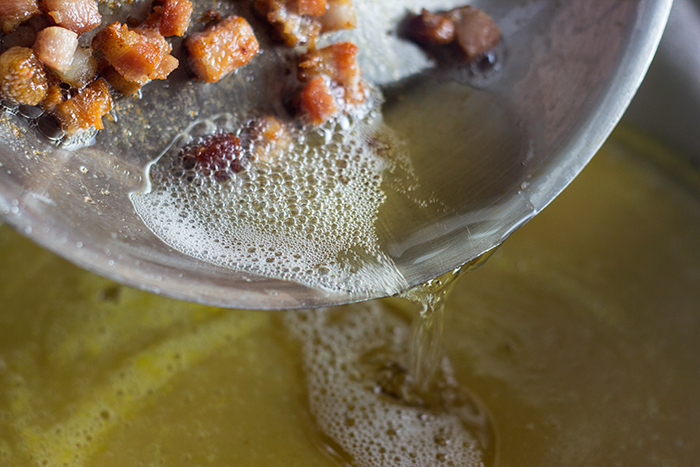 Now we pour in that bacon fat I keep talking about. Yup, all of it. 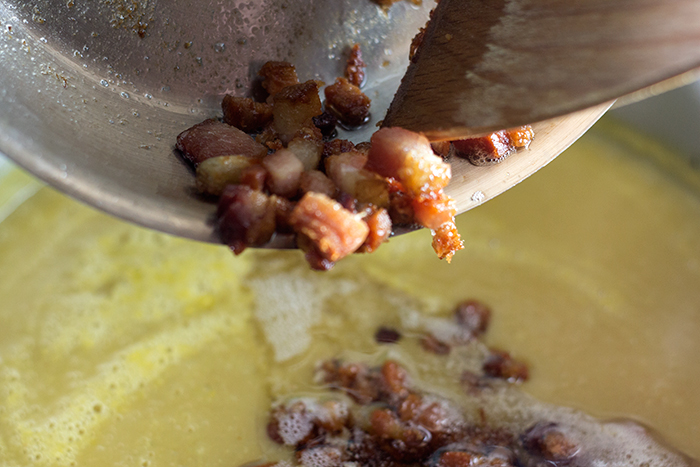 Make sure to get every last bit of the bacon…

Adding the cream for this soup isn’t an exact science. My folks will say “add to taste”. I like to be a little more exact, though, and usually add about 1/4 of a cup.

Or, if you really feel like you want to skip the cream, you can use milk as well. I do that sometimes when I just don’t feel like having extra cream hanging around in my fridge. Then I usually add about 1/3 of a cup of milk (or nut milk if I’m going dairy free, which I do when I’m being nice to my husband).

Now is also a good time to adjust the salt and pepper to your liking. 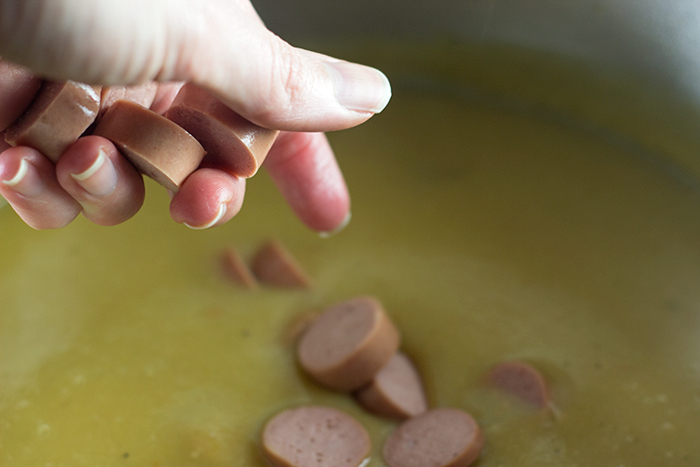 And if you really want a full on classic experience with this soup, add in a few chopped up wieners and just warm up in the soup for about 5 or so minutes before serving.

That’s is the absolute best!

And there you have it, my friends  – a classic (and very German) potato soup. Go forth and make it for your loved ones. Really hope you enjoy it as much as we do! 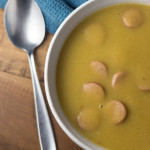 If you have questions about Suppengrün, just see my previous post!