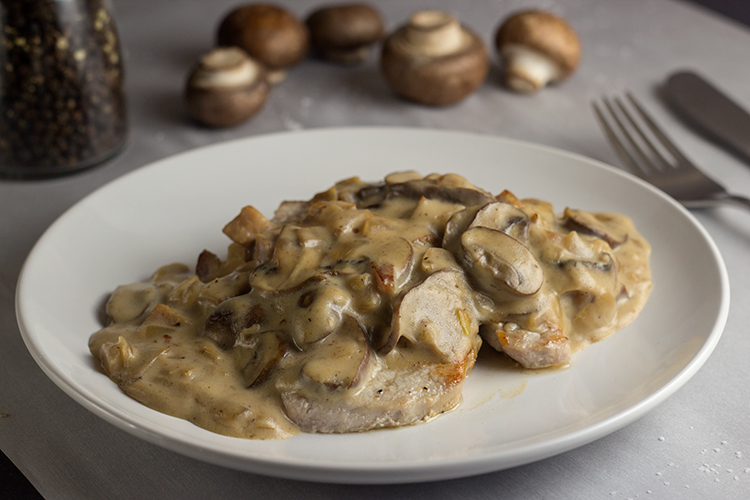 To some of you that know me, creamy Hunter Sauce (Jägersoße) might be the last kind of post you’d expect me to write. Up until about a year or two ago, I did not like mushrooms. Not at all. As with several food items in my life that I once detested, I just decide one day that I was tired of not liking it and started eating it. I know that might sound silly, but I’m serious. Plus, having some delicious pan-fried mushrooms off my Mother’s plate at the restaurant, Zeitlos, in Karlstadt am Main last summer certainly helped seal the deal. I’ve been a picky eater almost all my life, so this is one less thing I need to try to explain why I don’t like to other people. Yay!

Due to this previous mushroom dislike I’ve never really had this sauce until I started making it per a reader’s request. It wasn’t until half way through my second attempt I realized I wasn’t really sure how it was supposed to taste. I knew what I was making tasted really good but did it taste like real German Hunter sauce? I had to have my Mother to make my recipe for me to get a more accurate reading. Turns out I was on the right track.

As with all recipes, there are different versions out there with this too. There’s a more “red” version that uses tomato paste and still another that used red wine. Others add spices like paprika or garlic powder. They all sounds great but I’m going after a simpler cream sauce version that I felt I remembered seeing on other people’s plate when they ordered it.

According to my Mother, the reason this is called Hunter sauce (Jäger means Hunter, but most of you probably already know that from Jägermeister) is because traditionally it was the hunters that knew where to find the wild mushrooms in the forest. Before mushrooms were grown on farms, this made it a much more special kind of sauce. All that said, it is simply fantastic with pork, chicken, wild boar or just over brown rice and a side of roasted asparagus. 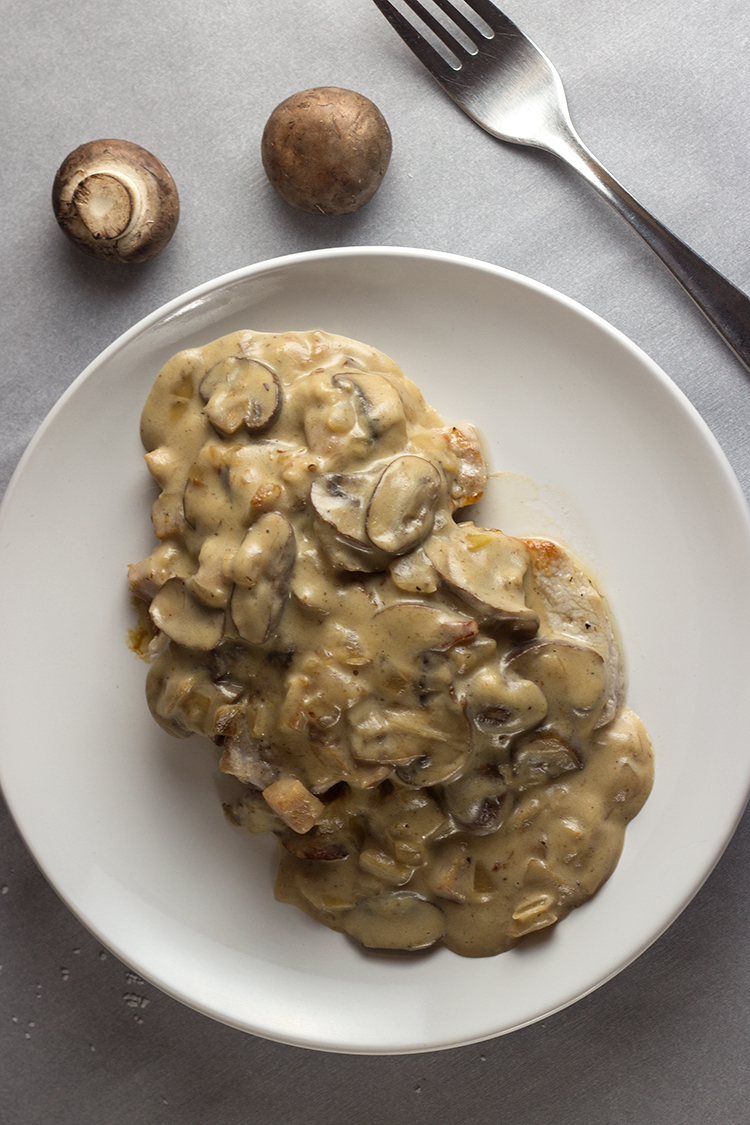 This makes enough for a table of four. If it’s just two of you, as it is with my husband and myself, you’ll have enough for leftovers. This is a good thing because the flavours become even better after sitting over night.

Traditionally, this recipe would use cream, instead of milk. I use milk for two reasons – less calories (about 52 per tablespoon with cream vs. 8 for 2% milk) and I never end up using a whole container of cream, so I don’t like the leftovers. Sometimes there’s no substitute for the flavour of cream, though! If you prefer to use it, just omit the tablespoon of flour. That’s just there to thicken the milk.

Let me be honest, with the addition of bacon (or preferably German Speck), this is not a Franconian or northern Bavarian version. It is, however, 100% German and 100% damn delicious. You can totally omit the bacon and it will still taste great. If you happen to know what part of German adds bacon to their Jägersoße, please enlighten me. 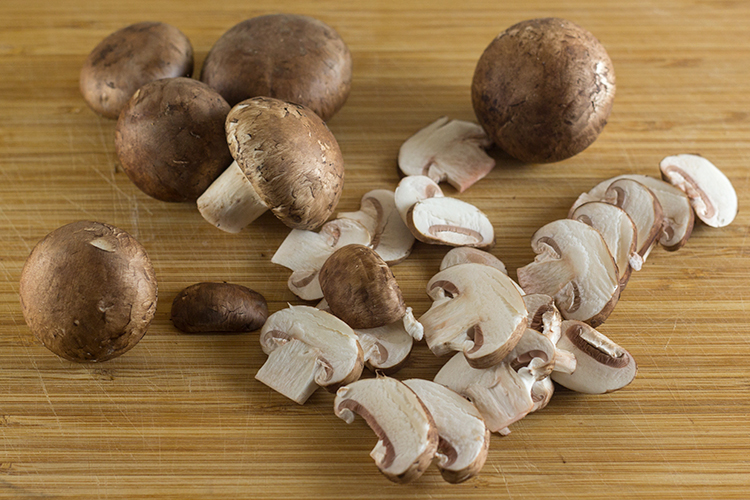 Slice up all your mushrooms. I always use cremini but white button works too.

Did you know that a cremini is the variation of the white button and just a baby version of the larger portobello? 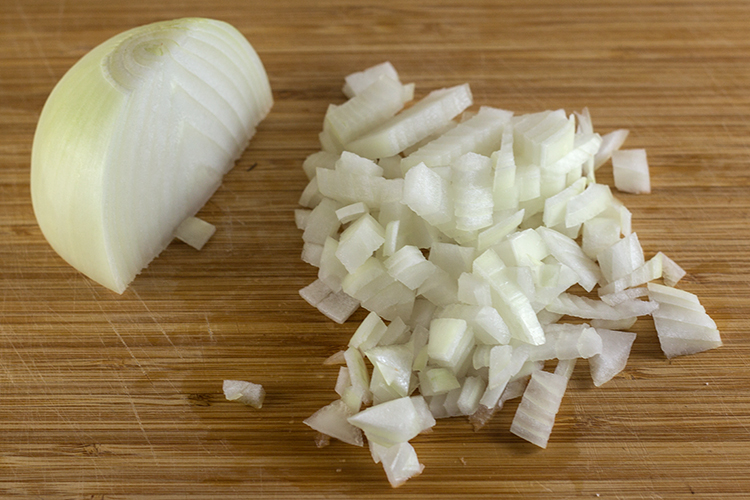 Chop up all your bacon (or Speck). I still prefer to get a whole chunk of unsliced bacon from the local butcher so I can mimic the look and texture of Speck. 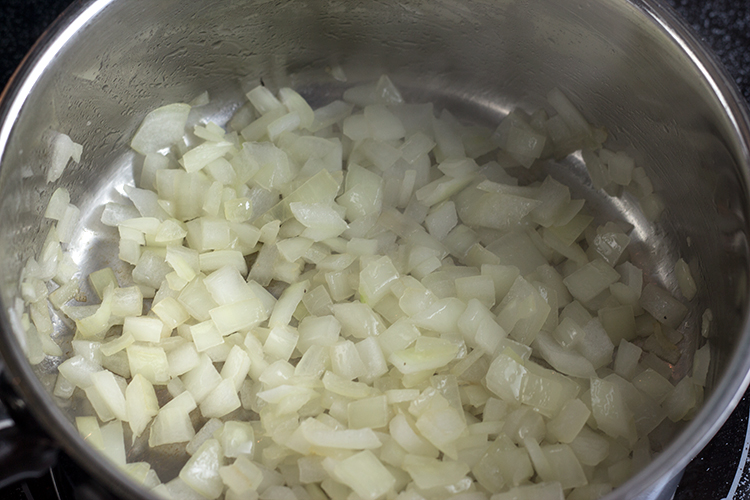 After adding some olive oil to a medium-sized sauce pan, sauté the onions on medium heat until they start to turn translucent. 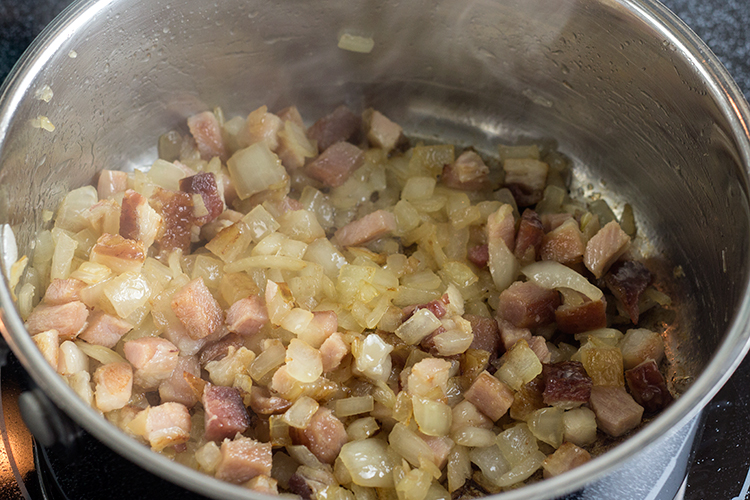 Add the bacon and stir together. Cook for an additional 5 minutes, stirring often to make sure nothing burns or sticks to the bottom too much. 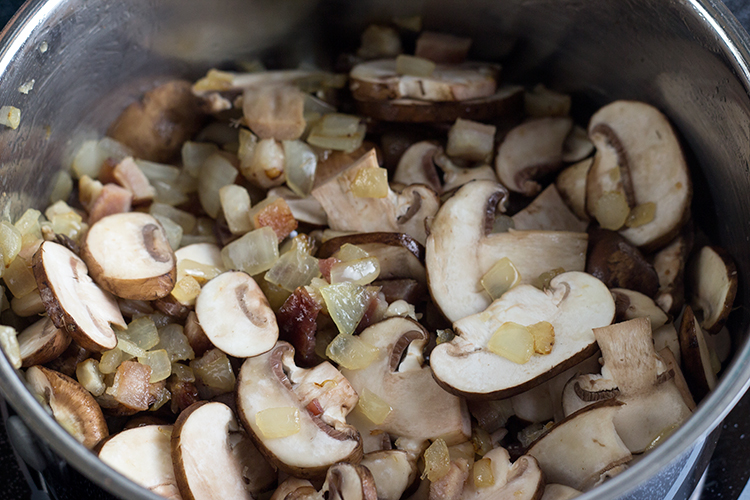 Add the sliced mushrooms. Cook for another 5 minutes, stirring occasionally. This is when I do the first round of salt and pepper to taste. 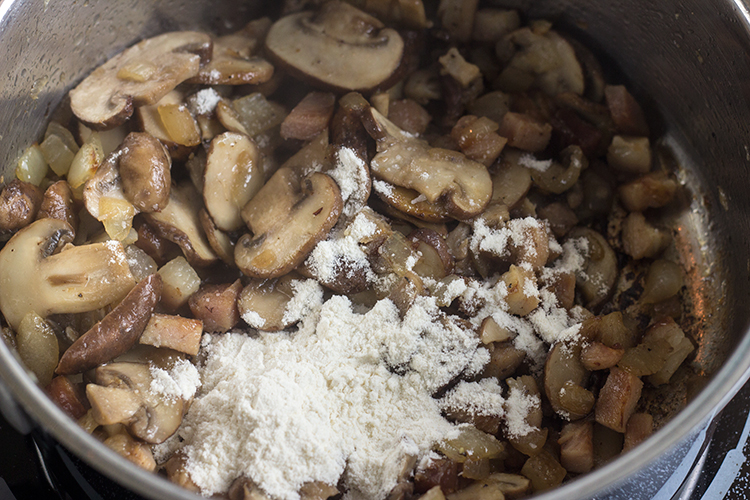 Once the mushrooms are soft, add the tablespoon of flour. 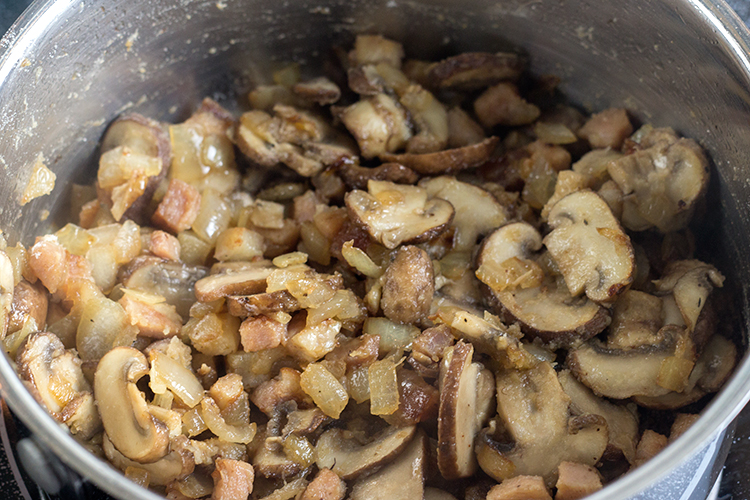 Stir to coat evenly and the whole mix should look more “pasty”. 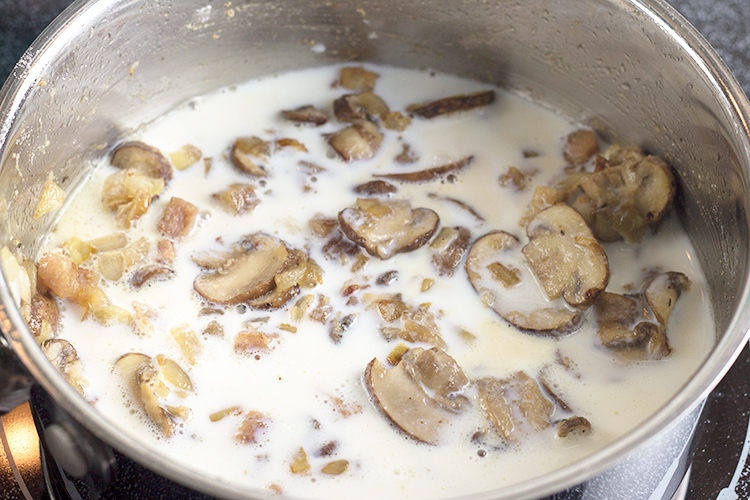 Follow it with the milk and let it cook for an additional 10 minutes on medium low. At first, scrape the bottom to loosen any brown bits. After that, stir often to prevent the sauce from sticking to the bottom of the pan. 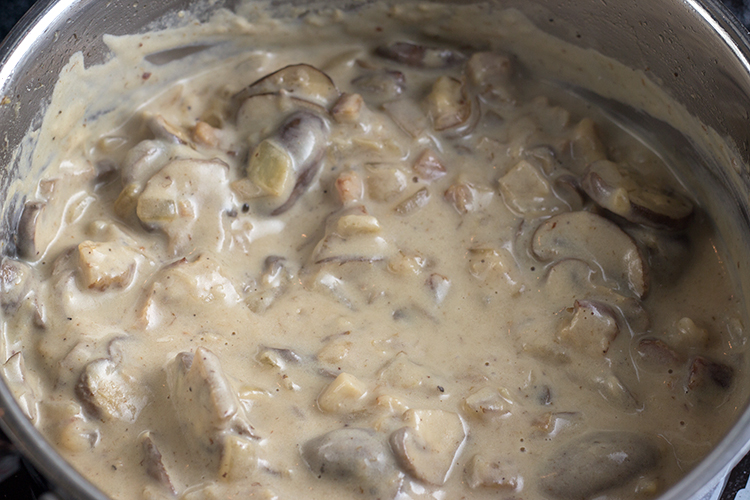 The sauce should thicken up and take on a wonderful “mushroom-y” flavour. If not, continue cooking for 5 – 10 more minutes on low.

If the sauce gets too thick, just add more milk until you get it back to the consistency you prefer. Remember to salt and pepper the final product to your liking. 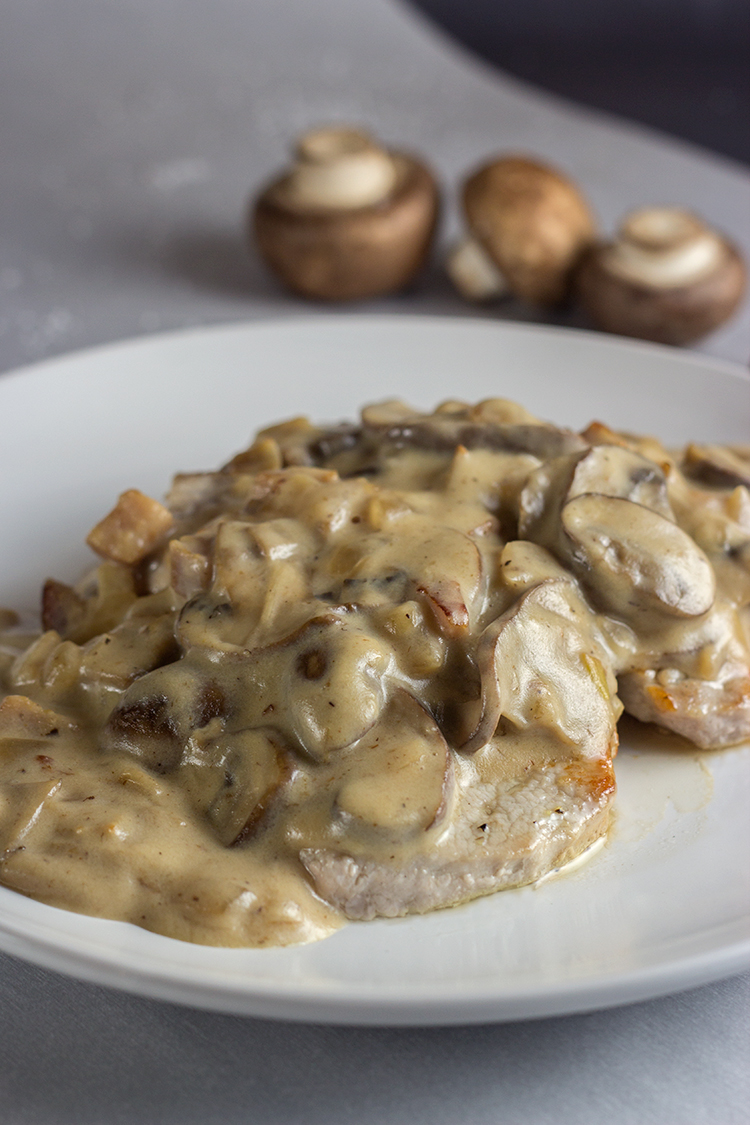 There you have my creamy hunter sauce. We have it over pan fried, thin pork cutlets. 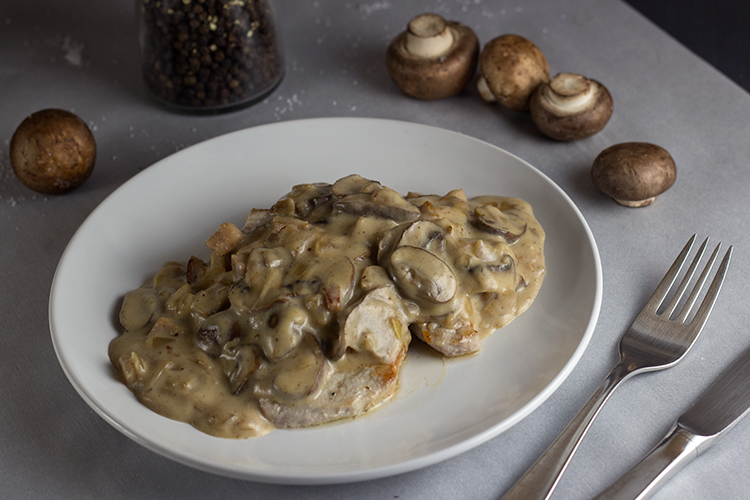 This has become one of my new favourites, so I’m very grateful for having had this as a request. <3

Do you have a favourite version of this creamy hunter sauce? 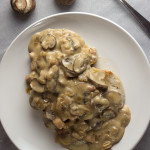 Traditionally, this recipe would used cream, instead of milk. If you prefer to use that, just omit the tablespoon of flour.
Bacon is completely optional. The sauce still tastes great without it.