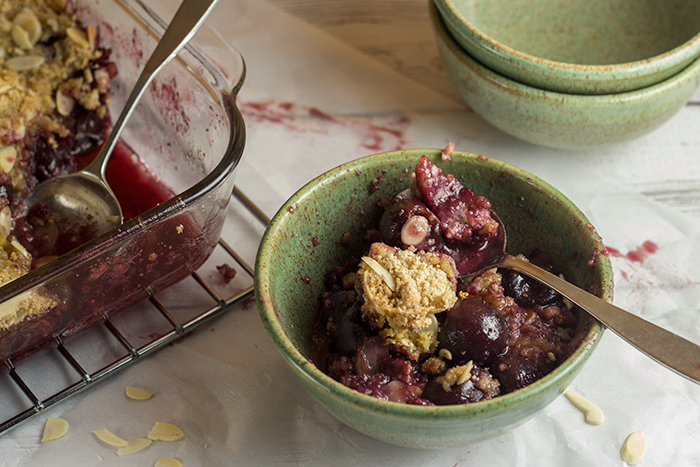 No, this cherry amaretto crumble is definitely not a traditional German recipe. It is, however, German inspired. I promise.

I’ve been mulling over putting this recipe on my blog for almost a year now. I started making it last summer when I happily received a surplus of Eastern Washington cherries from my Mother-in-law and needed a quick way to use up their deliciousness. Since then this cherry amaretto crumble has become one of my favourite versions of my go-to crumble recipe that I learned years ago from Southern Living. SL calls it a cobbler but technically it’s a crumble. As usual, the Kitchn can give further clarification on that, if you’re interested.

While traditionally more English and North American, crumbles have made their way into German cooking, or well, baking. I’ve seen plenty of different crumble recipes while perusing food blogs written by Germans, German recipe sites like Kochbar, Chefkoch and even from Dr. Oetker and the German magazine, Stern. 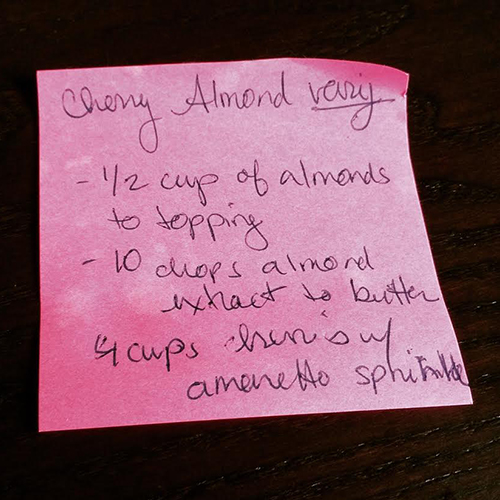 My scrawly notes on the recipe

Here, let me explain a little more about the German inspiration.

It’s because of the Amaretto and almond flavour extract I put together in the recipe. The use of alcohol and flavour extracts (known as Aromas in Germany) to me are *very* German when it comes to cooked or baked fruit, like jams, jellies and sauces. I feel like Germans just love to put alcohol in all kinds of desserts. (This is probably why my cake recipes have rum or red wine.) Just doesn’t seem as “risque” or “adult-only” as it does here in the States. Also, almond (Bittermandel Aroma) extract is quite popular in German desserts as well.

It’s because of the cherries. They’re a very popular summer fruit (and my favourite). Other than cherry pie, I’ve experienced far more recipes with cherries in Germany than I have in the States – cherry cake, jam, juice, ice cream, brandy (Kirschwasser), black forest cake (or black forest cherry torte as it translates literally from German) and Donauwelle, just to name a few.

Okay, maybe that last part is stretching a little. Therefore, I will also make sure to give the measurements in metric units, just in case any of my German friends wish to make this too! 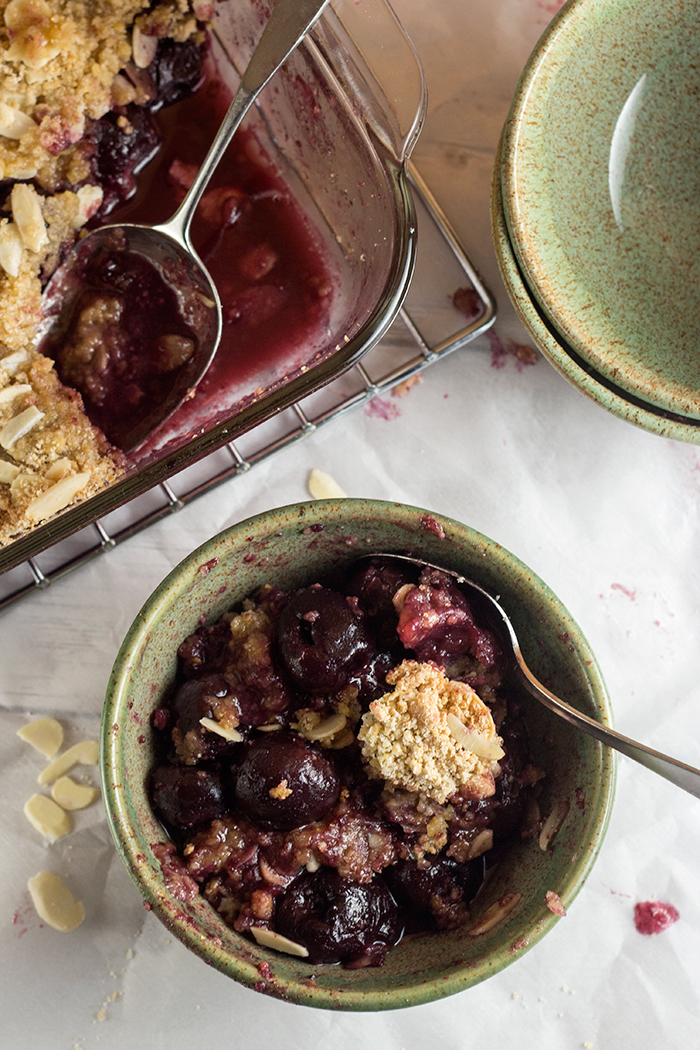 Using fresh cherries is just as good, if not better, than frozen. (Though, it is a little more work pitting all those cherries.) Just decrease the baking time by 10 minutes.

The only ingredient I cannot confirm 100% as a direct equivalent is the flour. I don’t have access to German flour types. However, my research is telling me that Weizenmehl Type 1050 and White Whole Wheat Flour should work the same. If this recipe doesn’t work for anybody in Europe that tries this out, please let me know and I’ll adjust the ingredients.

Shall we begin with the Cherry Amaretto Crumble? 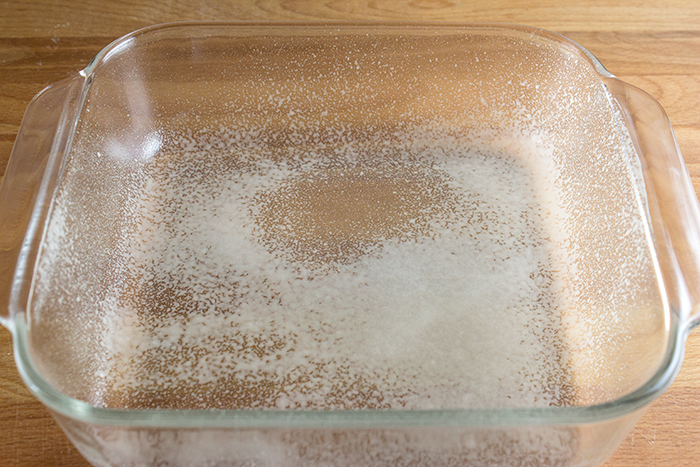 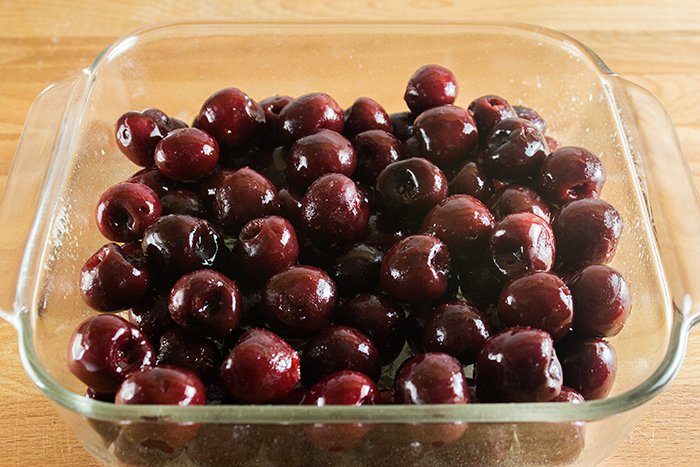 Pour in all of the cherries. 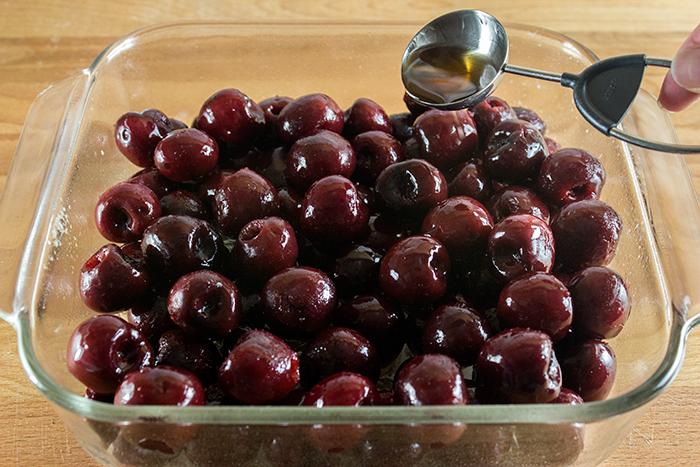 Sprinkle the cherries with the 1 tablespoon of Amaretto. Put the egg, sugar, salt and flour in a medium bowl. 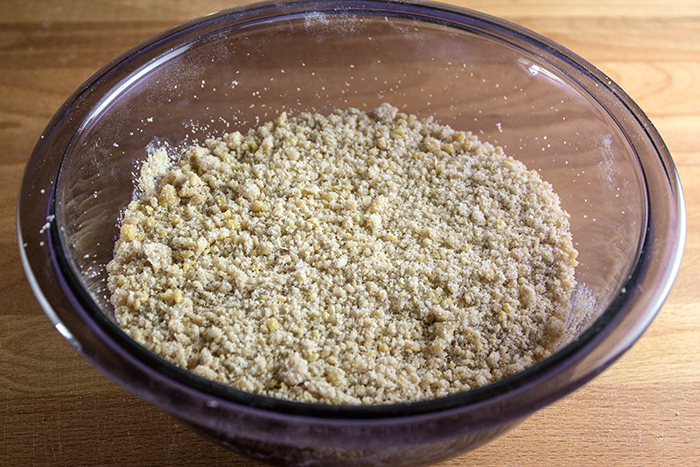 Stir together until it resembles crumbs or a coarse meal. 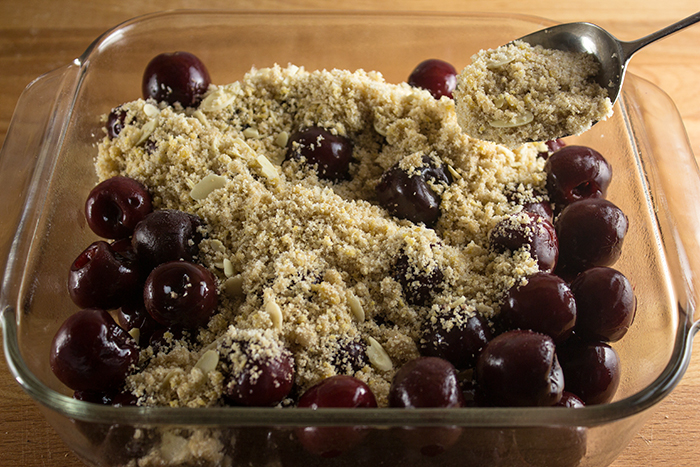 Sprinkle the mixture over the fruit. 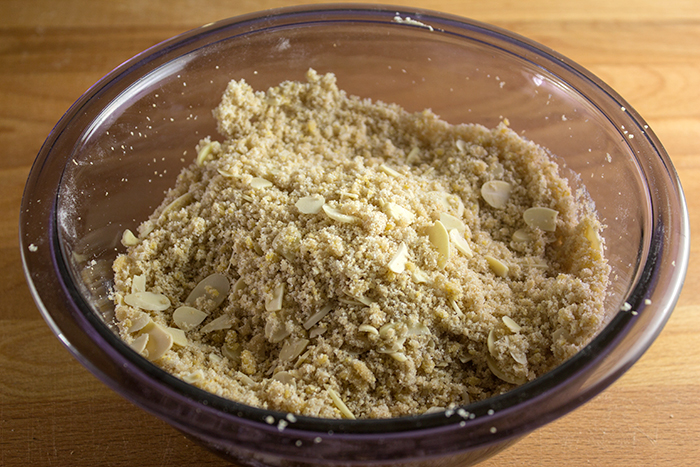 Add the almonds and stir until evenly distributed. This is what the bittermandel Aroma looks like, by the way. Add almond extract (or Aroma) to melted butter and stir.

You can get some from Amazon, if you want to try it out. 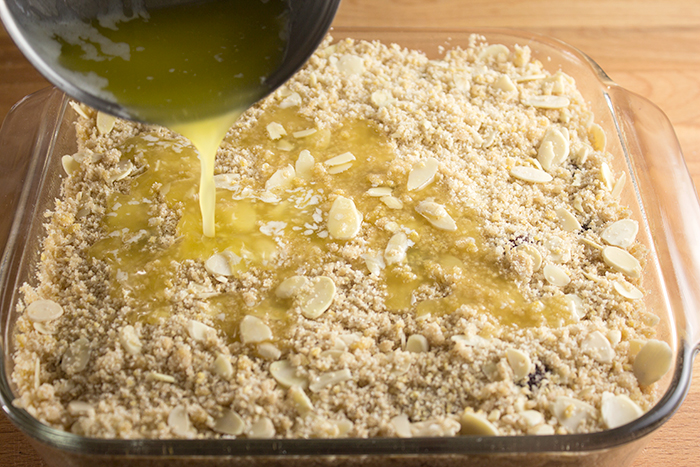 Drizzle the melted butter mixture over the top and then

Bake at 375 °F degrees (190°C) for 45 minutes or until topping begins to turn golden brown. Cherry juice should be bubbling up around the edges. 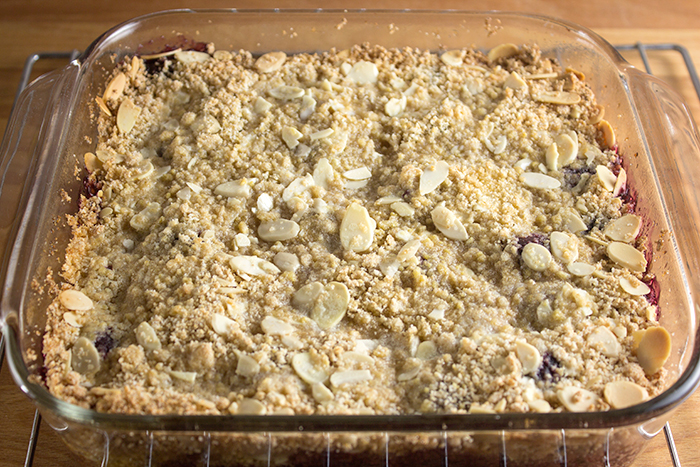 Let it stand and cool for 10 minutes before serving. 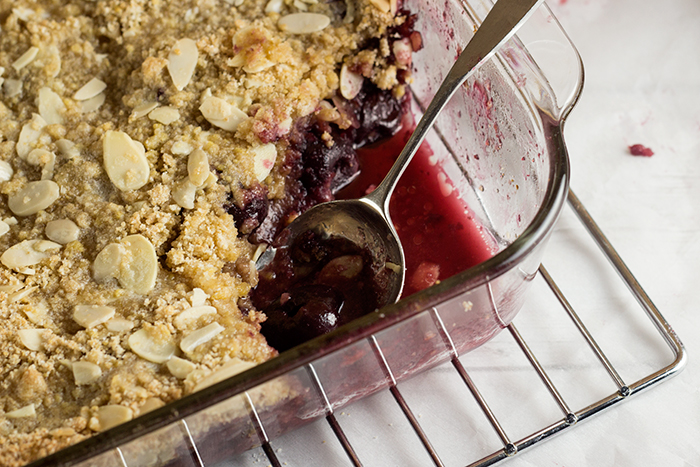 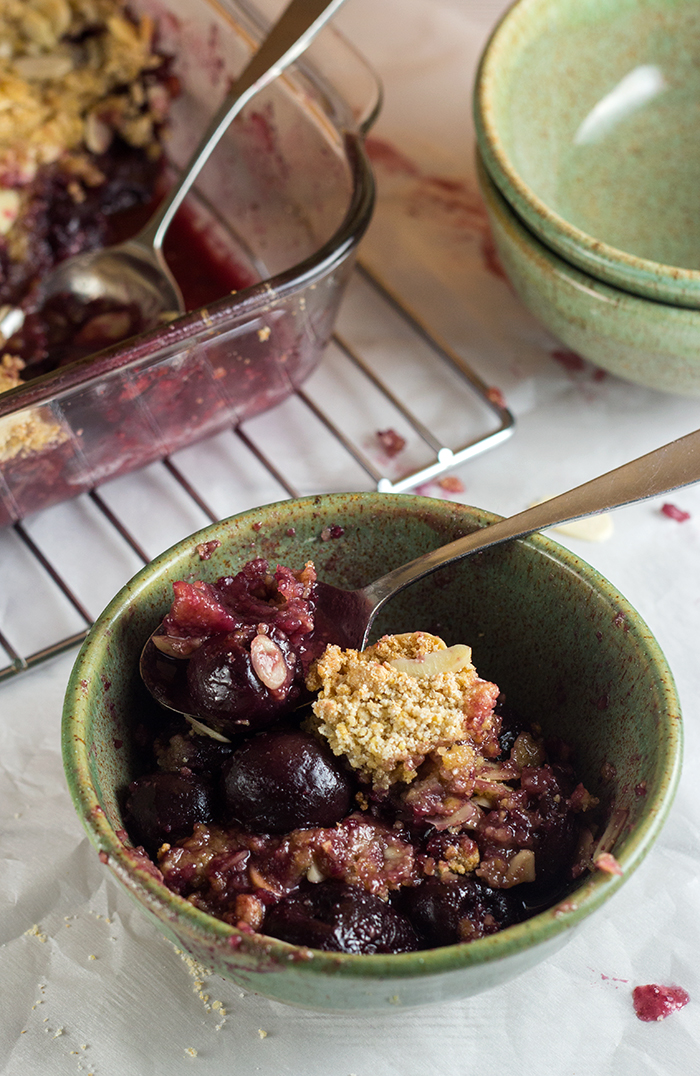 Do you have a favourite cherry recipe? If so, tell me about it below. 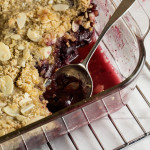 German flavour Aromas are stronger than Extracts. 1/4 teaspoon of Aroma equals 1 teaspoon of extract in flavour power.
Using fresh cherries is just as good, if not better, than frozen. Just decrease the baking time by 10 minutes.

Disclosure: The Kitchen Maus may be compensated in exchange for your clicking on links posted within this page. It’s usually not much more than pocket change and it’s never for products that we don’t use personally.
Like it? Feel free to share it!