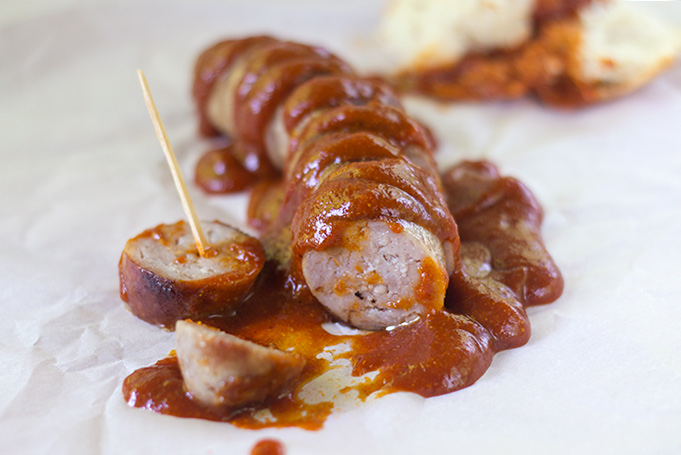 Currywurst is widely considered to be the ultimate German street food.  The lovers of this dish are ardent about what should and should not go into the perfect currywurst sauce. This has made the recipe a tough nut for me to crack.

In hunting across the internet on both English and German sites, I’ve found recipes that use cola, orange juice, apple sauce, apricot jam, plum juice and lime juice. I got the feeling it would take months to try all these versions. Some folks say there should definitely be fried onions in the recipe, others say definitely not. Others say that ketchup is the best base, while others basically state that’s an offense to the dish.

The one thing everyone can agree on is that there is no “official” currywurst recipe. That’s something, at least.

Another thing I can say about currywurst is that I’ve never seen anyone in Germany make currywurst from scratch at home. Sure, they love making their own jams, wine, juice and pickling veggies but it must be easier to just run to the local Imbiss for some currywurst. Truth be told, if I had a local source, I probably wouldn’t make it at home either.

– Jump to the Currywurst Recipe –

Legend has it that creator of currywurst was the saavy housewife, Herta Heuwer, from the Charlottenburg district of Berlin. In 1949, she apparently traded spirits for ketchup (some sources say Worcestershire sauce) and curry powder with British soldiers stationed there after the war.  I’m guessing that she experimented with these ingredients and other spices until she found something she liked. The currywurst sauce is much more than just ketchup and curry powder. Either way, the resulting sauce was poured over grilled pork sausages. Ta-da! Currywurst was born.

She began selling it as a low cost street snack and it didn’t not take long for it to become a success. I’m guessing folks loved the exotic flavour (for that time period, at least). It was particularly loved by the construction workers that were rebuilding the city because it was an inexpensive protein laden meal.

There’s some information out there that says currywurst was created in Hamburg as early as 1947 in Hamburg by Lena Brücker. Whoever invented it, I would say that Frau Heuwer seems to be the one that made it popular.

The several recipes that I did try all ended up being too sweet for our tastes. I did read that traditional Berlin currywurst is supposed to be like that but I really can’t verify that. It’s been 15 years since I had some in the beautiful German capital.

The currywurst I’ve had in in more recent years in Bavaria are much more like the sauce you get when you make a Knorr Fix or Maggi Fix & Frisch packet versions. I usually bring several back home with me because they’re so cheap and so good.

I really thought that with my curry ketchup success I’d be able to easily translate that into an easy currywurst sauce but that hasn’t been the case. Why? Well, because I was determined to use canned tomato sauce instead of ketchup. However, even though I’m sure I’ll be ruffling someone’s feathers, I’m going to revert back to the simplicity of using tomato ketchup as a base. From there I’ll continue to try and crack this nut. I know that ketchup wasn’t easy to get after the war, so I’m sure the recipe changed to use tomato sauce, paste or canned tomatoes.

So, let’s get cracking on the currywurst! 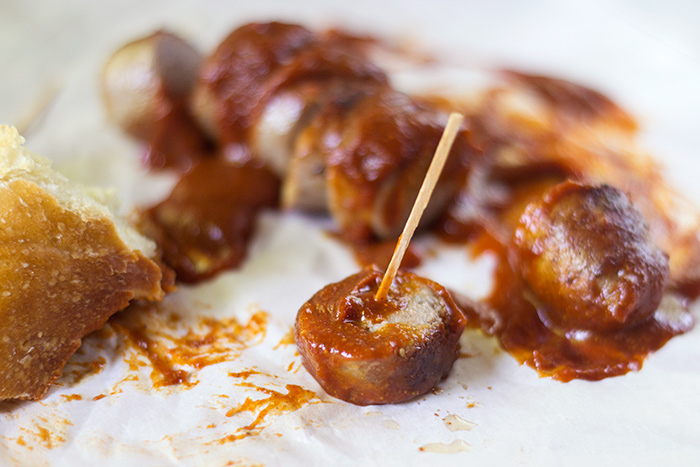 – You can easily sub the beef broth for veggie broth and use vegan Worcestershire sauce to make this a vegetarian dish. While I haven’t tried it yet, I really feel like this sauce would go great on vegetarian sausages too.

– I use a full 5 teaspoons of curry powder because I feel that gives it the best flavour. Using 4 is tasty too, though.

– Feel free to omit the cayenne pepper completely if you don’t like a lot of spice. 1/4 definitely gives it a solid kick.  Mild curry powder already has a minor, teeny kick on its own.

– If you can’t get or don’t want to invest in smoked paprika, I’m thinking that using liquid smoke and sweet paprika would work. I specifically used smoked paprika for that smokiness. I wouldn’t be surprised if once you start using this spice, you’ll always want it on hand. It’s expensive, if you don’t nab when it’s on sale, but it’s really wonderful.

– If you don’t have any (or want any) paprika, this recipe should still work without it. 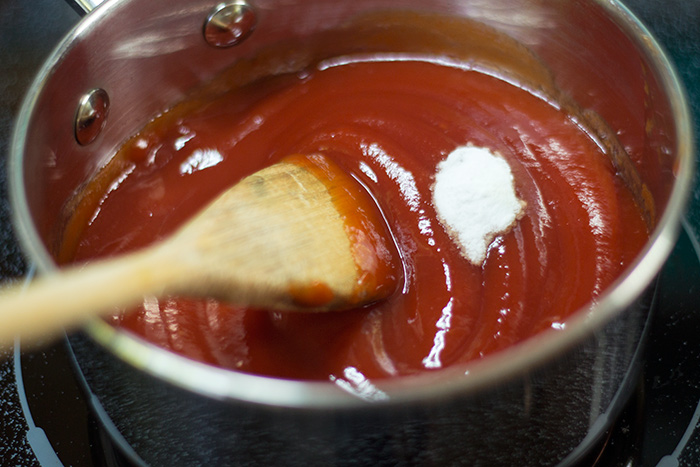 Put one cup of ketchup into a small saucepan on medium low heat. We want to warm up the ketchup for a few minutes for our next step.

When it’s nice and warm, drop in the 1/4 teaspoon of baking soda. Yes, you heard me right – NaHCO3. What the heck, right?

Well, what I was looking for was a smoothness in the flavour that wasn’t coming about with all the acid in the ketchup and Worcestershire sauce (or any vinegar I tried). The acid bite just kept bothering me. I finally decided to neutralize it with the baking soda and found 1/4 is the perfect amount. We’re doing this before we add the acid from the Worcestershire sauce so that we’re not totally without acidity. 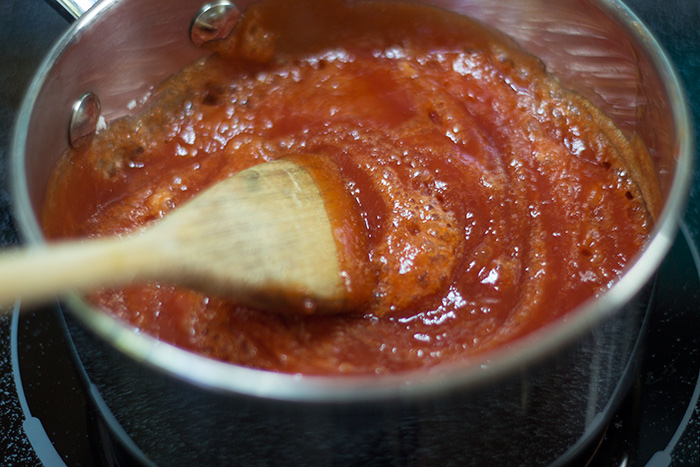 This is really important – once you drop in the baking soda and start stirring, it’s going to start to foam. You’ll need to stir continuously until the foaming subsides.

The ketchup should look almost exactly like normal ketchup again once you’re done. It will just taste a little different. 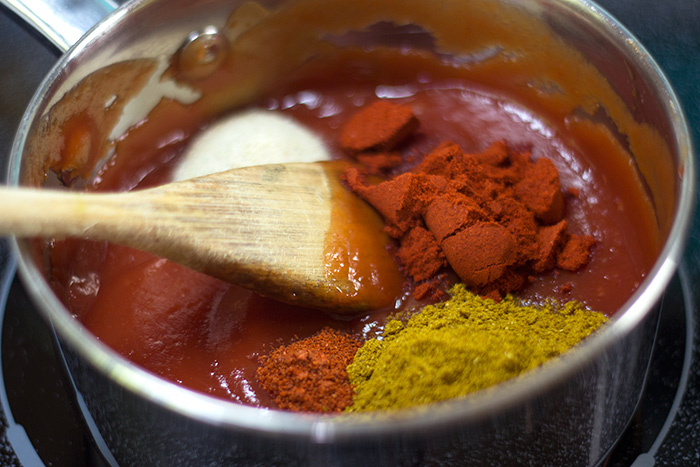 Reduce heat down to low. Add all the wonderfully aromatic spices and give it a nice stir. 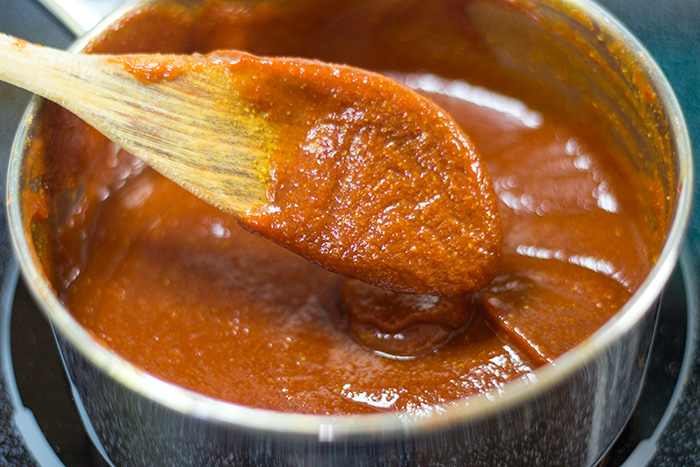 Add the liquids, combine thoroughly and it should look something like this. Simmer on the stove for 5 – 10 minutes.

The currywurst sauce that you get at an Imbiss will be a lot more liquid. I liked the flavour and consistency of this, so I went with it. 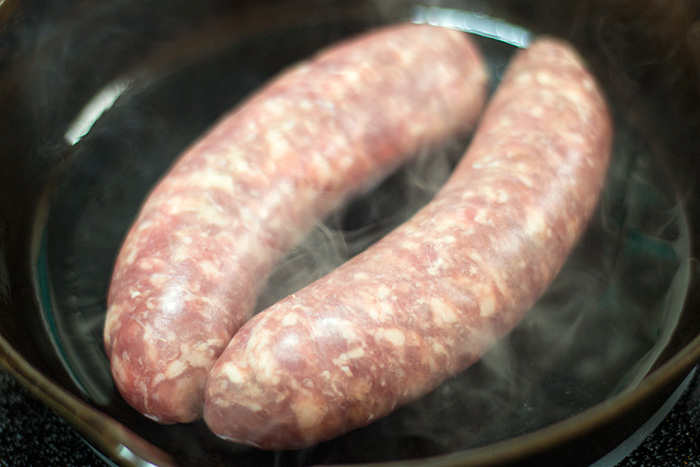 Next up is the bratwurst. This recipe makes a lot of sauce, so pan fry up (or grill) as many bratwurst as you want for your meal.

I love using the raw bratwurst we get from our local German Deli – Liebchen’s Delicatessen. The brats are made by locally by Bavarian Meats and they’re delicious! However, we also tested out Johnsonville’s Smoked Brats and they taste great with it too.

(Hrm, I’m thinking I need to maybe write a post about pan frying up raw brats…) 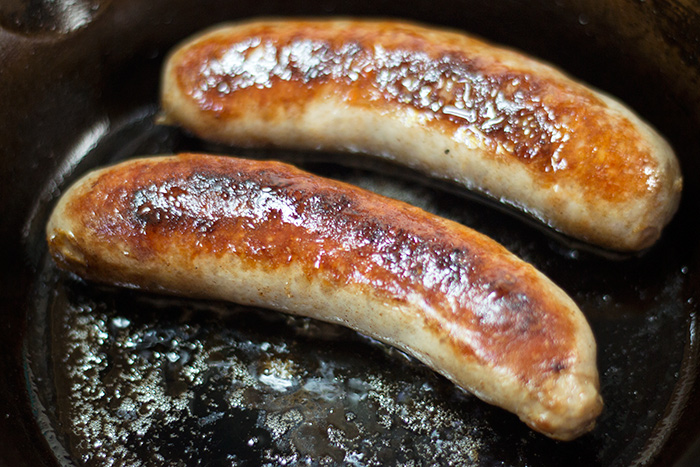 Okay, so once the brats are fried, slice ’em up and smother in currywurst sauce. Serve with a crusty roll or bread to mop up any extra sauce on the plate. Also, fries. Both potato and sweet potato fries taste great with this.

Leftover sauce keeps well for several days in the fridge. I know because I have about 7 variations waiting to be eating in my fridge right now. So much sauce!

Want to come over to help us finish it up? Pretty please with curry on top? 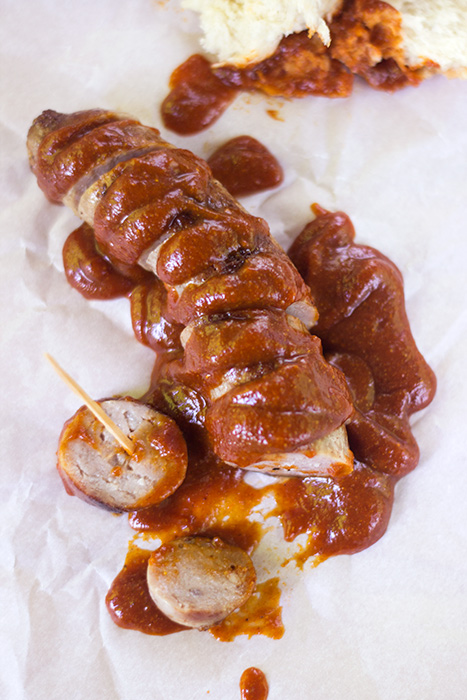 Well, there you have it!  A quick and delicious homemade currywurst brimming with curry goodness.

One thing to note is that currywurst is ALWAYS served with a sprinkling of curry powder on top. I just somehow completely spaced on that when taking this pictures. Do not do like me. Dress yours up with curry powder it deserves.

I just need to say this – If you ever find yourself in Germany, please spare yourself the trip to the American fast food joints. Yes, it’s easy to find McDonald’s, Burger King and even Taco Bell or KFC sometimes. Yes, they usually have something on the menu you won’t find in North America, like beer at McDonald’s, which can be kind of fun to see.

However, do yourself the supreme favour of trying out street food vendors that serve sausages, currywurst, döner kebabs and a host of other delights. Some places might look like a hole in the wall but I’m willing to bet their food is still excellent. Or, just go by the telltale sign – if there’s a queue for the food, it’ll be worth it.

You’ll be one step closer to getting a more authentic or culturally immersive experience.

If you have favourite place to eat currywurst, I’d love to hear about it! 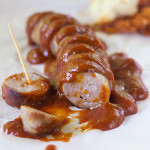 A quick and easy currywurst recipe that will bring back memories of Germany. Smoky, spicy and a little sweet - it's perfect over bratwurst.
Prep Time 5 minutes
Cook Time 15 minutes
Author The Kitchen Maus

– You can easily sub the beef broth for veggie broth to make this a vegetarian dish.
– Feel free to omit the cayenne pepper completely if you don’t like a lot of spice.
– If you don't have smoked paprika, using liquid smoke and sweet paprika should work.
– If you don’t have any (or want any) paprika, this recipe should still work without it.

Disclosure: The Kitchen Maus may be compensated in exchange for your clicking on links posted within this page. It’s usually not much more than a cup of coffee and it’s never for products that we don’t use personally.
Like it? Feel free to share it!