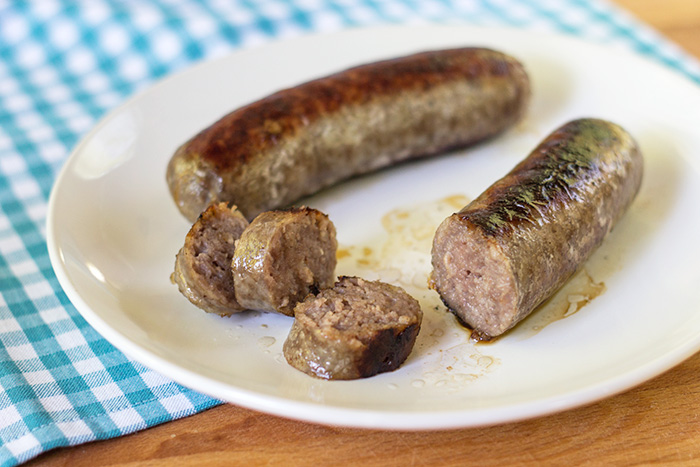 In the past when I’ve asked someone (usually German) about how to cook bratwurst, I’ve usually gotten an answer like – just pan fry them until they’re brown and done through. That should be simple enough, right? Except, when you’re cooking raw sausages, as bratwurst always should be, there’s room for error. For me, this translates to the bratwurst being too brown on the outside but still pink in the middle. I’m sure a lot of that comes from just not being patient enough, which can be a problem of mine in the kitchen.

So, I’ve been looking for a more reliable (easier) way. Something that didn’t require me to watch the pan like a hawk, tap my toes with impatience or gain lots of experience to just know when it’s done.

In scouring Google, I had a hard time finding that foolproof method which worked for me. Most information is pretty vague on the time frames and doing things like pricking the skin or cutting them open to check is discouraged. You’ll lose valuable fat that keeps the bratwurst nice and juicy. It’s also highly recommended to not let the skin split while cooking (due to high heat) for the same reason. However, I feel like the latter is a matter of preference. I personally don’t mind one bit because it usually means the casing will be a little crispier.

These are the four methods I tried out:

The last two methods are very similar. The main difference is that with the last one the heat isn’t on when the sausages are in the water and we have a very defined length of time. It’s that last one that worked like a charm for me and I’m going to share with you some more information.

First, though, let’s talk a little about the bratwurst.

All about the Bratwurst

Bratwursts are easily found across North American, mainly thanks to some tenacious German immigrants in Wisconsin. However, the sausages are said to have originated in the Franconian region of southeastern Germany, likely Nürnberg.  Some information states that bratwurst have their origins with the Celts and that the Franks (or Franconians) continued to develop them. This wouldn’t surprise me one bit as I know that the Celts were firmly entrenched in Southern Germany for several centuries.

If you know any German, you might already know that braten means “to fry or roast”. You’d think that’s where the name comes from but it’s not. The name is actually derived from the Old High German word, brät, which means “finely chopped meat”. And of course, wurst is just sausage.

The husband likes to ask – Why are they called the “worst” when they’re clearly the best? *chuckle*

A traditional bratwurst is made out of ground pork. Though, you can also find them made of veal, sometimes beef or a nice mixture. They can also come either finely or coarsely ground. Recipes (and lengths) vary almost from region to region and apparently there are some 40 different types of bratwurst served in Germany.

Let me give you some examples:

Now you know a little more about what to expect from bratwursts if you ever visit southern Germany. You’ll also have an easier time picking the one you want when you come across a vendor that’s grilling up different kinds.

On that note, I’ll mention you will be asked if you want it with hot mustard or without – “Mit oder ohne?” – meaning “with or without”. For me, it’s always ohne. I know, how very un-German of me. Why bother with mustard (ewww, mustard…) when the bratwurst taste fantastic on their own?

Dad, I’m totally backing you if you ever become king and outlaw mustard from the land. Sorry, that’s a longstanding family joke!

Okay, let’s get back to cooking these bratwursts. 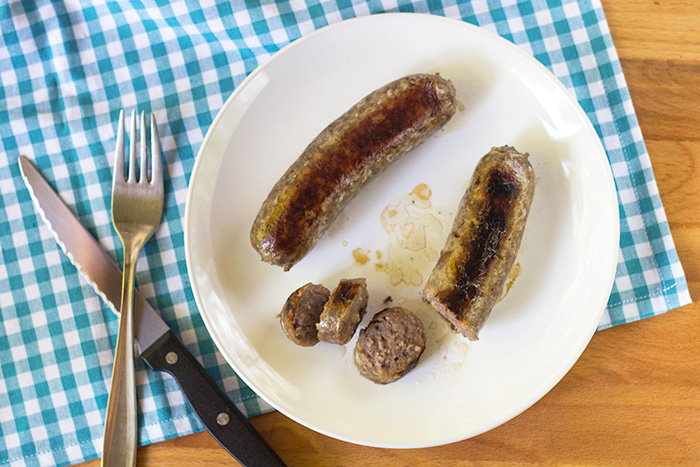 As I mentioned earlier, I’m going with the last method of the four I tried. Basically, we’re parboiling before we fry them in a controlled manner. 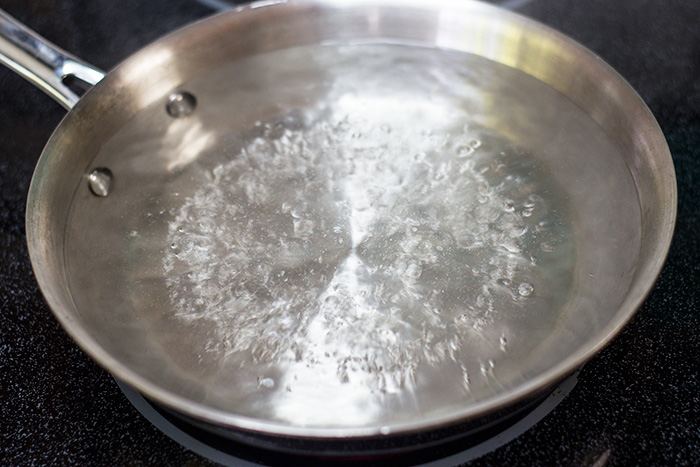 First thing we do is put enough water in the pan to cover, or mostly cover, the sausages. Bring this to a slow boil on medium high heat. We want rising bubbles. 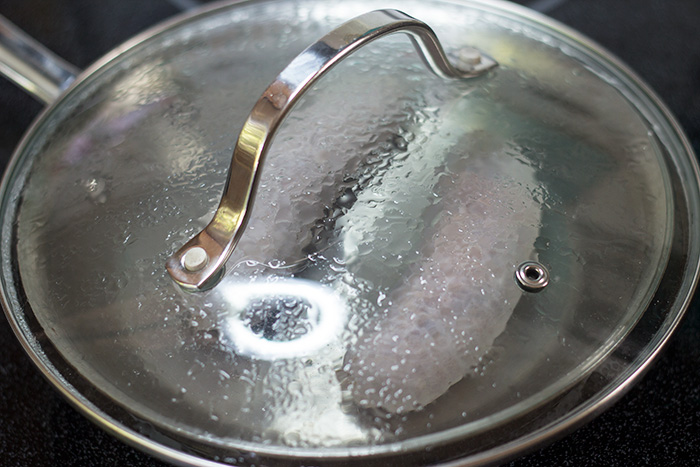 Once we have those bubbles coming up, put the bratwurst in the water. Put the lid on the skillet and turn the heat OFF. Let them sit in the hot water for seven minutes. I do not have a lid that fits this pan perfectly, so I improvised. However, a good fitting lid is definitely better.

I love this part because I can do other things in the kitchen without worrying about it. 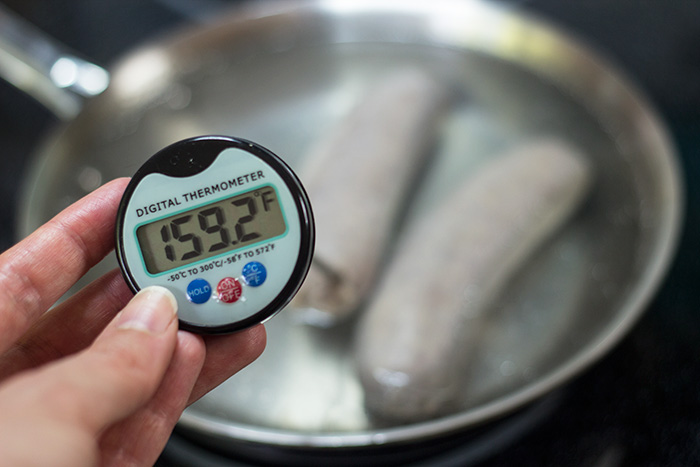 If you feel like it, check out the internal temperature by sticking a meat thermometer into the open end of the bratwurst. It should read between 145 – 160 degrees, which is perfect. 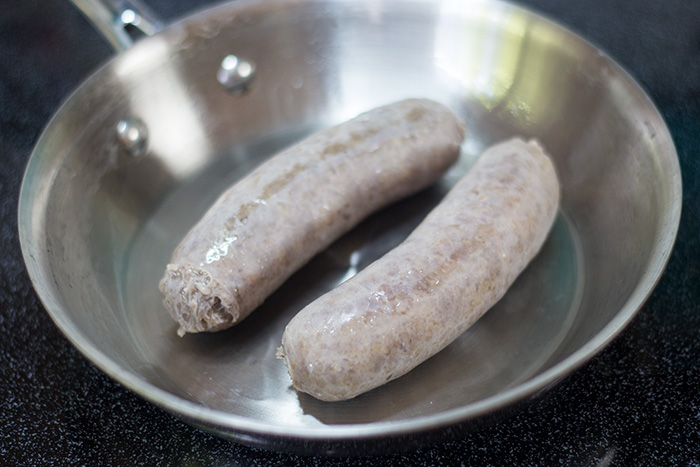 Next, drain the water from the skillet. I usually take the bratwurst out first to make it easier for me. 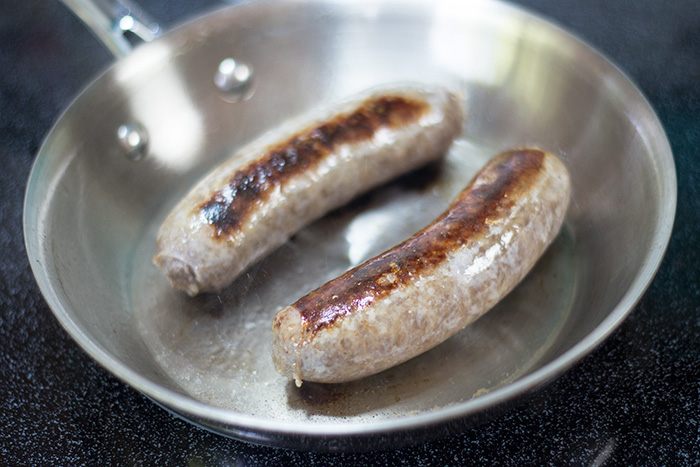 Place the sausages back in the pan with a little oil over medium heat. Fry them to fairly dark brown on each side.

If you don’t want to worry about it, brown for 4 minutes, flip them over and brown the other side for another 4 minutes.

However, if you’re using an all metal pan, it’s not usual for the bratwurst to get stuck to the bottom of pan while they’re frying. Don’t worry about this. They will release on their own when the casing has caramelized enough. That’s the perfect time to flip them over. 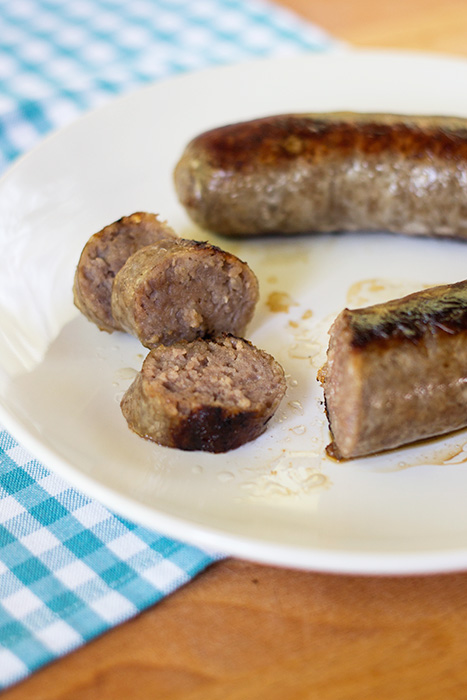 While I just shared the info with you in my style, I feel the need to emphasis that I learned this method from Frank Isernio on his YouTube channel. His sausage company, Isernio’s, makes wonderful Italian style sausages, links and ground chicken local to us in Kent, Washington.

Okay, so Italian isn’t German but Italy is only a hop over the Alps away. Close enough, right? Also, if it works, it works. Besides, I’d say that Italians know their sausages just as much as Germans.

Here’s the video. Watch it and soak up the knowledge. Plus, Frank seems like a pretty nice guy.

So, that’s more than enough on the subject of the delicious bratwurst.

Please, feel free to share with me how you cook up your raw sausages, bratwurst or otherwise. I’m always interested in learning more!

Use the pan fried bratwurst to make homemade currywurst! 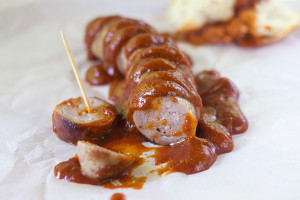