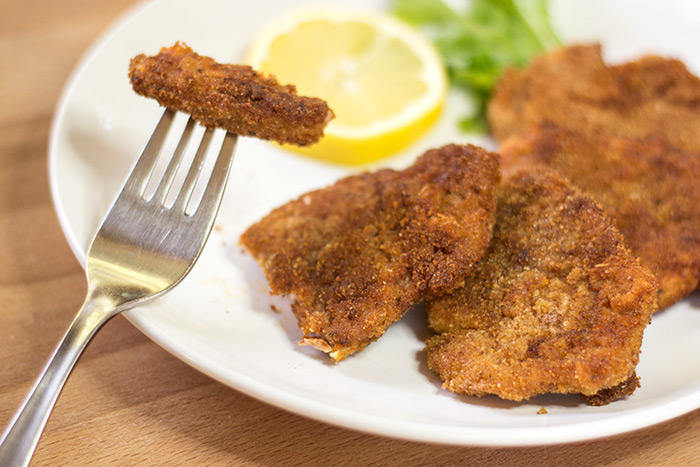 This. This recipe is one of my absolute favourites. Kinder schnitzel is tender little slices of pork tenderloin that have been breaded and pan-fried. For all intents and purposes, they’re just like a mini schnitzel. I’m sure that most folks would agree that schnitzels are one of Germany’s most well-known foods after sauerkraut and maybe on par with warm potato salad.

– Jump to the Recipe Making –

Growing up, this dish was just referred to as lendchen. Turns out that’s just the German word for tenderloin. As I started researching German recipes for the blog last year, I couldn’t find anything called lendchen that looked like what we made.  I checked with my Mother and that’s when she told me that our lendchen don’t really exist in German cuisine. That was a minor “mind blown” moment for me because I had always just assumed that they were German instead of German inspired. I left like – How did I not know this? Anyway, she said to me she was wanting a much smaller version of a traditional schnitzel to satisfy my bird-like appetite as a child. Okay, yeah, that made sense because I didn’t eat a lot as a kid and I’m sure most kids don’t.

When I told my husband the story, his response was just this – why not cut a regular schnitzel into smaller pieces for a kid? Um, because these are not only easier, but they’re also better. Sheesh. Okay, the latter bit isn’t fact but opinions count for something, right? I also told him about how much more tender the pork tenderloin is so you don’t have to use a meat tenderizer to flatten it. One less step = A little easier.

Per my mother’s recommendation, we are now calling the recipe Kinder Schnitzel to make it more “official” sounding. Though, in my household, we’re just calling them “mini schnitzels” now.

There you have it, the familial history behind this wonderful little recipe.

I promise you, they never fails to impress. My folks have made this for years as a “guest worthy” dish and everyone just loves it. Even my husband recently asked me why we don’t make this more often. When I do, he sneak eats most of them before the end of the night. So much for leftovers!

While it does take a little bit of effort and patience, it’s perfect to make in large batches. They reheat well enough but the coating is never as crispy as it is at the first meal. However, they’re great eaten cold, especially lined up on a sandwich.

And yes, just as the name suggests, they’re perfectly sized for any little ones with small appetites.

Okay, let’s get started with some kinder schnitzel making! 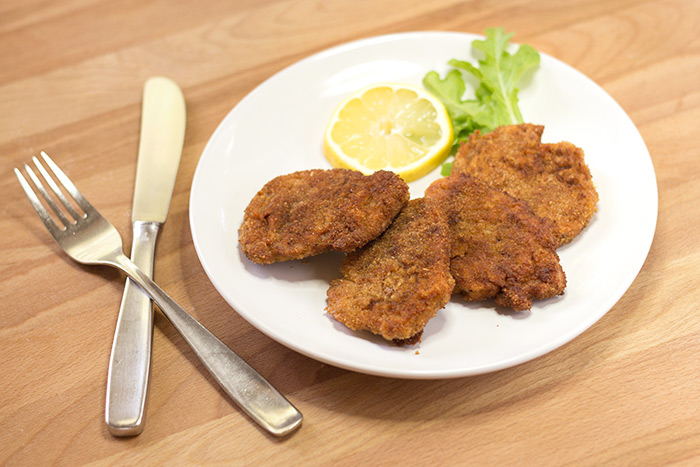 Spices for the Pork:

To get prepped, you’ll want to beat one egg in a flat bowl and put breadcrumbs into another. I set up those two bowls next to my cutting board and put them in a line towards the frying pan.

I start with just one egg and go easy on the breadcrumbs at first. Depending on the size of your tenderloin, you’ll likely need more of both later. However, I always hate to have a lot of leftover egg and breadcrumbs at the end of a recipe like this, so I add as I go. Yes, you can mix to the two together when you’re done and fry it up but that was never my thing. If I do that now, it goes to the dogs for their dinner.

So, you do what works best for you! 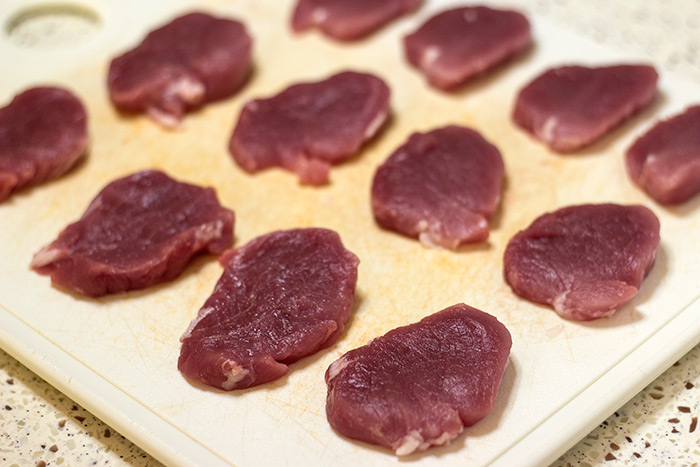 First thing we do is to thinly slice the pork tenderloin. I’m not a master of measurements, so I usually eyeball this.  But, I’ll say if you’re between 1/4 of an inch and a 1/2 inch, you’re doing fine. 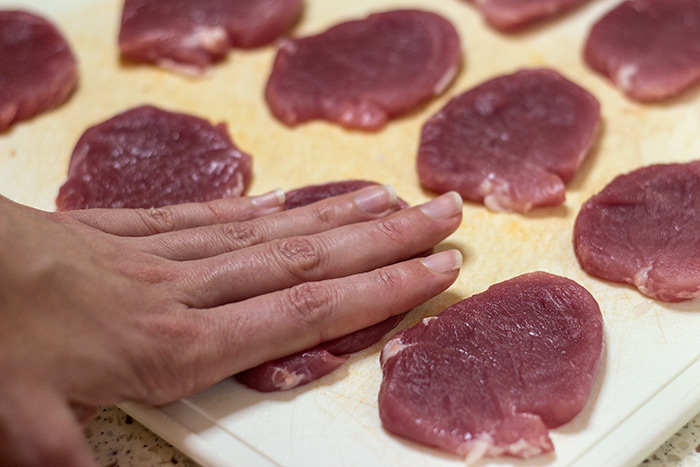 Now, let’s light press down on the tenderloin slices. You can do this with your hand or with the flat side of a broad knife. This flattens them out nicely. More surface area for the crust and crust is yum. 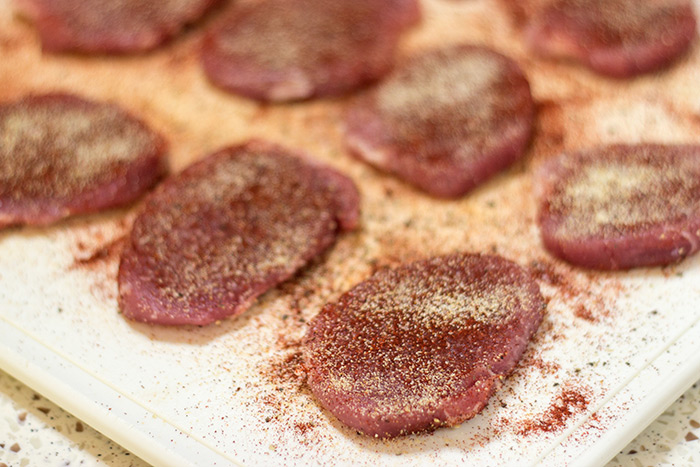 Season both sides liberally with coarse salt, freshly ground pepper, sweet paprika and garlic powder. I always do it in that order but aside from doing the salt first,  it doesn’t really matter.

If you haven’t already, put some oil in a large frying pan and put the heat on medium. You’ll want enough so that the meat is almost swimming. 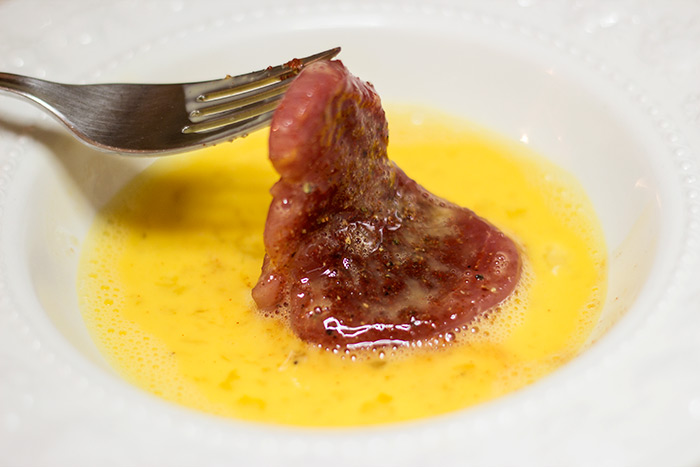 Next, dredge the seasoned meat slices in the egg. 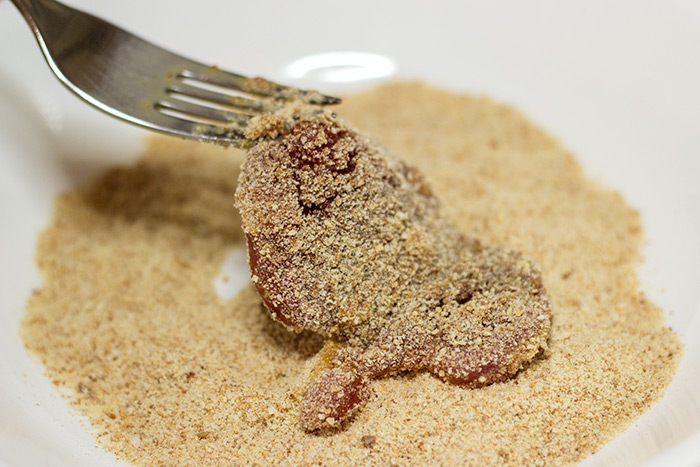 And then coat them on both sides with breadcrumbs. 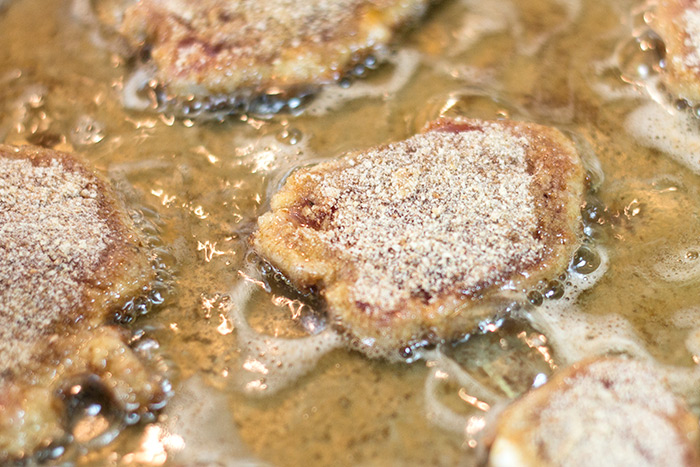 Fry for about 3 – 4 minutes or until bottom crust is golden brown.

Flip them over once  and fry again until golden brown. 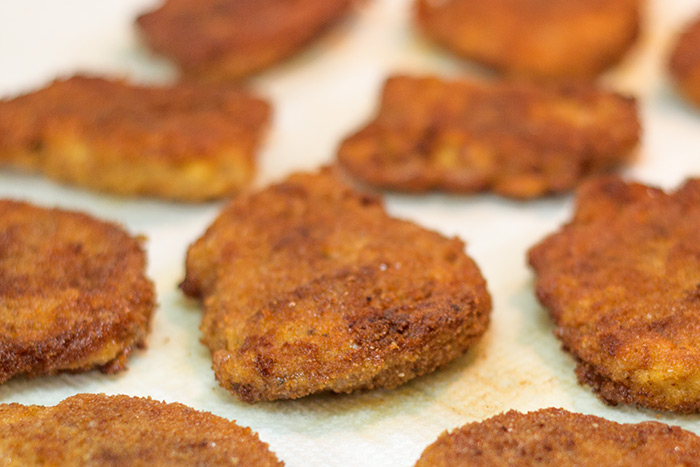 When they’re done and the crust is that lovely golden colour (they can be lighter than this), take them out and place them on a paper towel to drain. If you don’t do this, the crust will never be that crispy. This is very important, if you can’t already tell.

Depending on the size of you pan and how many slices of tenderloin you have, you’ll likely have to do this two, three or more batches.

In my experience, it’s better to do this whole process as an assembly line, instead of setting up a bunch in advance on a plate before they go into the pan. The longer the meat sits with the breading, they more likely the breading is to absorb liquid from the egg and meat. They have a harder time getting a really nice crispiness on the coating during the cooking process. Or, maybe that’s just in my head. 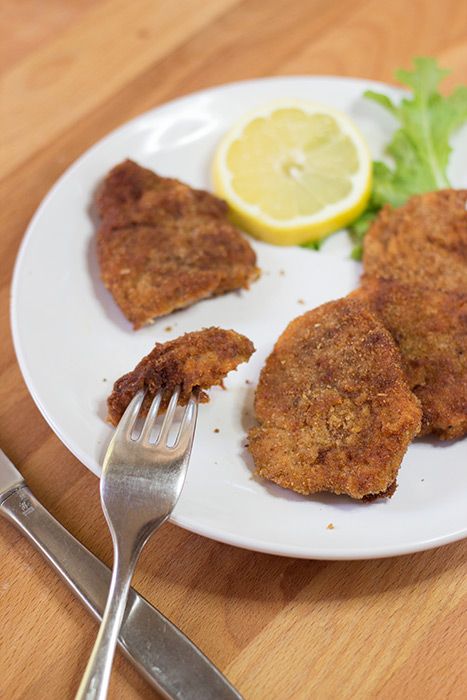 If you want to eat them real “German style”, either squeeze some fresh lemon juice over the kinder schnitzel or press a lemon slice into the breading with your knife. Lemon always makes breading taste that much better. However, these definitely taste great without it too. 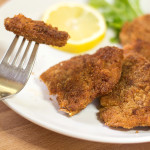 Spices for the Pork