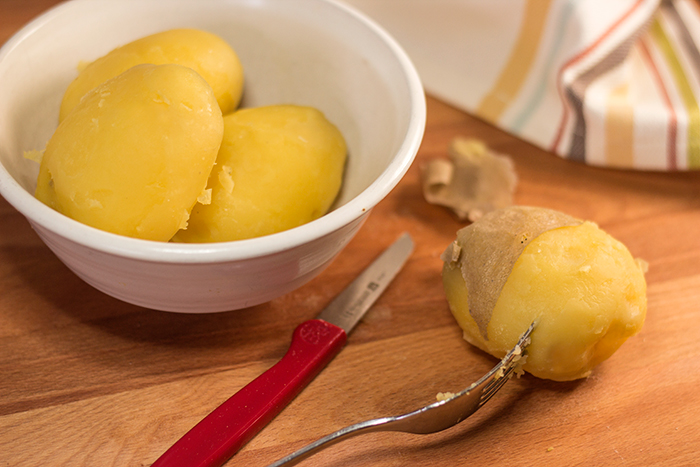 Here we have the next installment of the two part boiled potato post – boiling potatoes with the skins.  It’s not very glamourous, and certainly not that different for Part One, but it’s the foundation for some wonderful recipes like schupfnudeln (my favourite!) and warm potato salad. While this isn’t much of a side dish, you can certainly use it as one and dress up the potatoes with some butter and salt table side.

So why boil potatoes with their skins on when some might say it’s much easier to peel them raw?

Well, I asked this very question while I was in Germany this past December.  It comes down to this – potatoes cook better with their skins on because they stay firmer, which is important for recipes like aforementioned potato salad.  It also them helps keep the flavour and nutrients inside while cooking.

Boiled Potatoes with the Skins 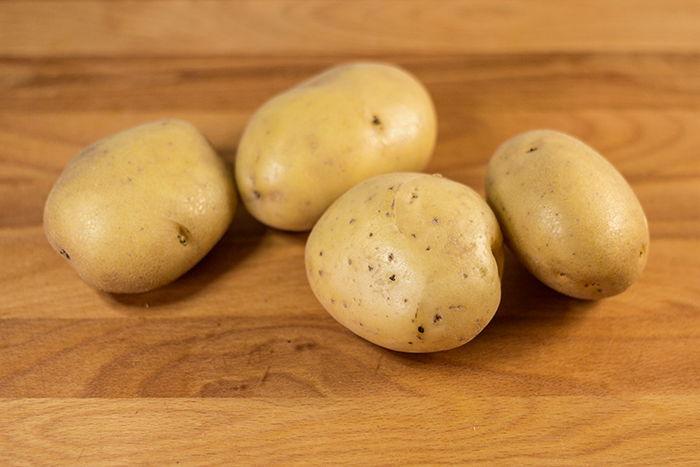 Make sure all your potatoes are around the same size so that they cook faster and more evenly. Usually smaller potatoes work best for this so they don’t need to be cut. 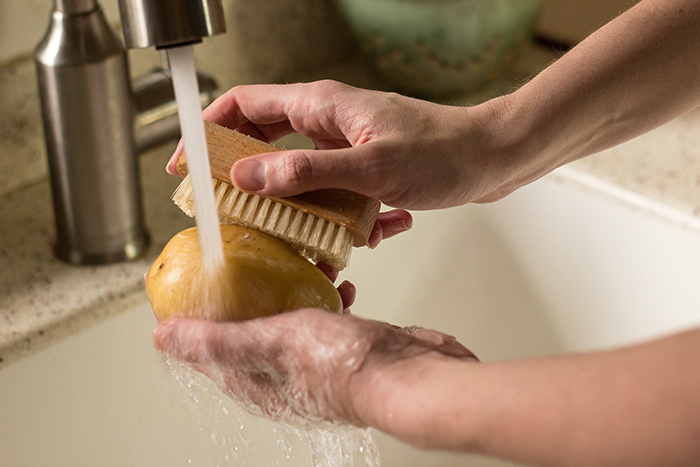 First off, wash the potatoes thoroughly. If you have a vegetable brush, go ahead and give them a good scrubbing. 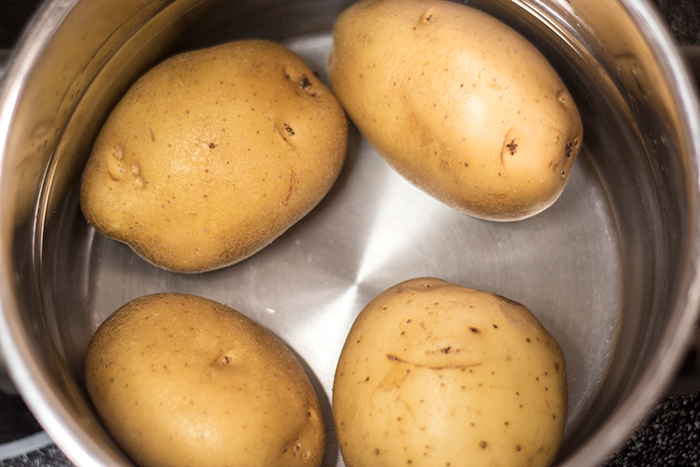 Place the potatoes in a large pot and cover with cold water.  Bring to a boil and cook for about 15 – 20 minutes.  Once the water has started boiling, I like to bring the temperature down from high to medium high. 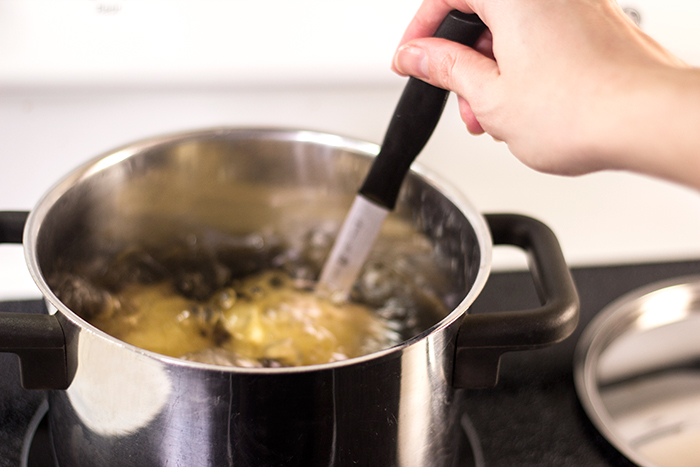 I begin checking mine after about 10 minutes by poking it with a fork or paring knife.  If they’re done, the utensil will slide to the center easily.  Though they probably won’t be done within 10 minutes, it never hurts to start checking early. 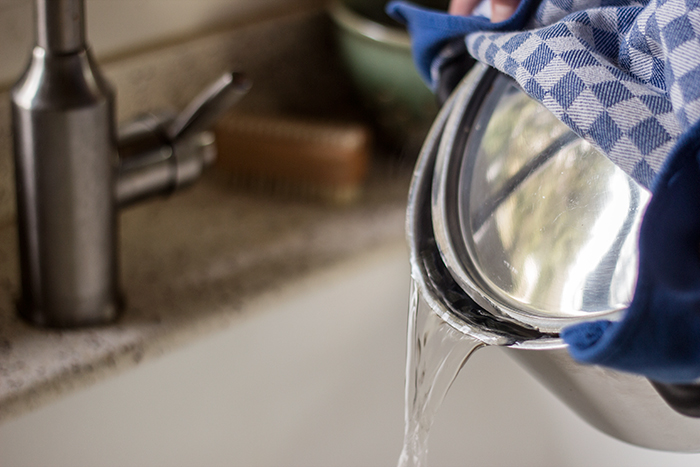 When the potatoes are tender, drain off the water. 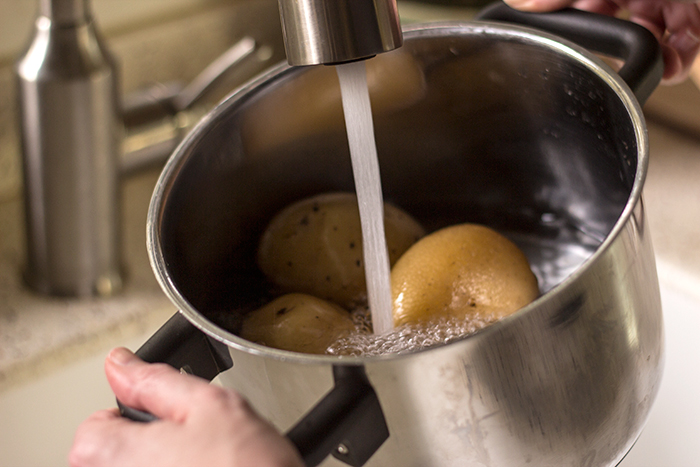 Pour cold over the potatoes to stop the cooking process.  This also helps cool them off so they can be handled without burning off your fingerprints. 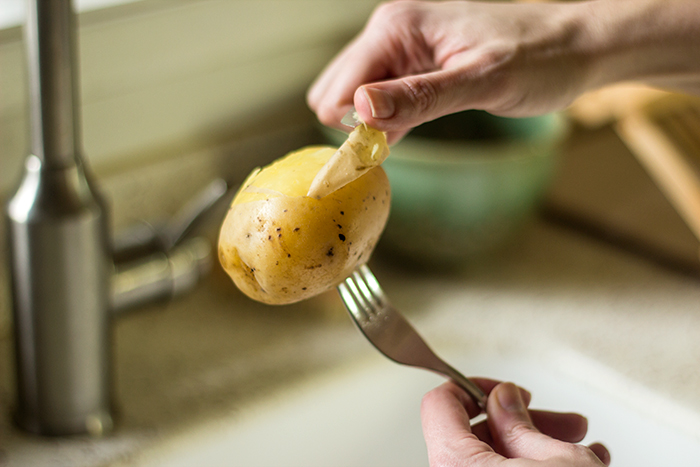 Stab a potato with a fork and start peeling the skin off with a small paring knife.  It should come off easy enough that you could do this with your fingers, if you wanted, but the knife makes short work of this. Plus, the potatoes will still be pretty warm and you’re saving yourself from sore fingers.

I’ve seen my Oma peel these with a paring knife while they were still steaming hot.  I’ve tried that before and… ouch.  Guess my digits aren’t hardy enough for that yet. 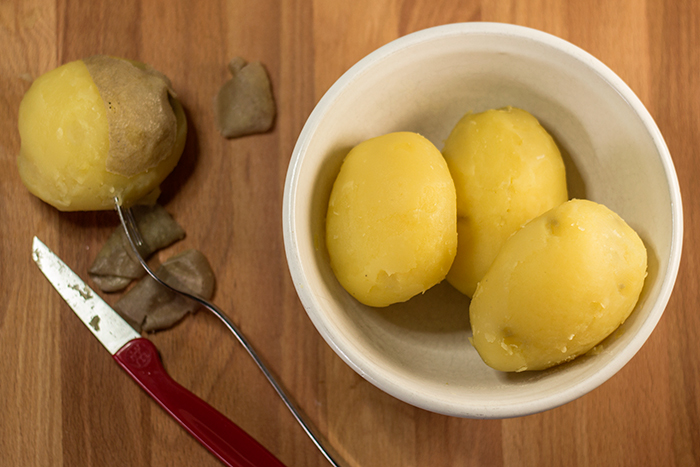 And there you have it!  Potatoes boiled with their skins on and then peeled afterwards.  Not really so hard since you’re going to have to peel them either way.

Or, you don’t have to peel them at all and can just eat them, skins and all.  That’s a tasty, and nutritious, option too! 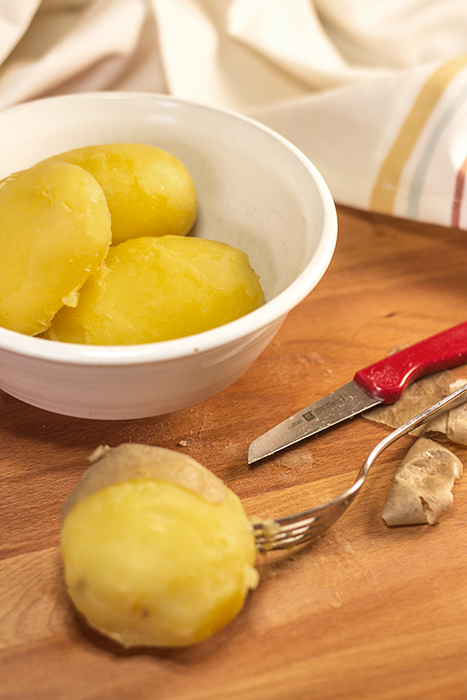 Now I have both of my foundation potato recipes out there which will help us with future recipes. I’m looking forward to sharing warm potato salad, potato pancakes (Kartoffelpuffer), potato dumplings, schupfnudeln (potato noodles), German roasted potatoes and potato soup with you. Hrm, yes, Germans sure do love their potatoes. 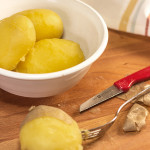 Boiled Potatoes with their Skins

Make sure that all the potatoes are around the same size so they cook evenly. 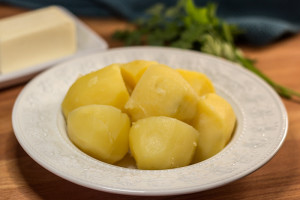