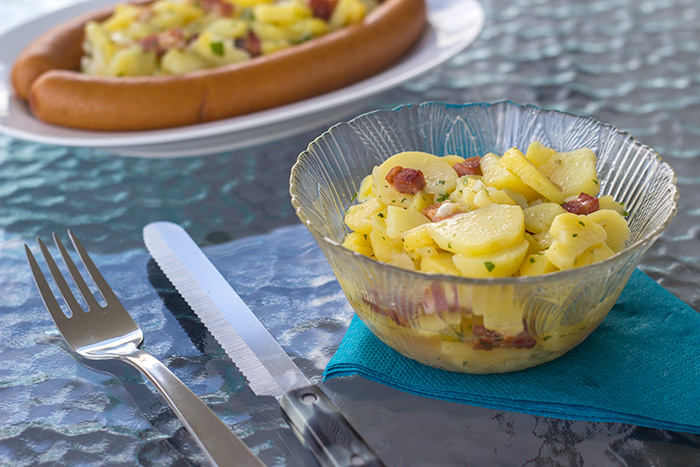 I believe that warm German potato salad has to be one of the most requested recipes I’ve had so far. Though I’ve promised it several times already, I’ve never gotten around to it. I’m pretty sure I was putting it off because I’m not a huge fan of potato salad. Part of me wasn’t looking forward to having containers of it in the fridge that I knew I was going end up feeling guilty about not eating.

Yeah, I admit it. I’m a weird German who doesn’t like potato salad. Or any potato salad, for that matter. Pretty shocking, I know!

Phew, I feel better with that off my chest.

It’s not to say I don’t think this German potato salad recipe isn’t awesome, because it truly is or else I wouldn’t be sharing it with you. It’s often requested by family friends, so it’s definitely tried and true. Since my Mother is the expert on this, I thought that learning it directly from her while we were in Germany together would be the best way to go. She gave me a wonderful lesson that I’m about to pass onto you.

But, before we get started…

Though this style of potato salad is commonly known as “German potato salad” in the States, it’s really more of a Bavarian thing. It’s sort of akin to taking a Chicago deep dish pizza and just calling it “American pizza”. Not exactly correct, right?

In Bavaria, it’s simply referred to as just Kartoffelsalat, which is just German for potato salad. You can certainly find lots of variations that might include mustard, cucumbers, pickles or sugar. However, for the potato salad to be traditional “Bavarian style”, it should have these things in common – be served warm, include bacon (preferably the German style known as speck), onions and and tangy vinegar. Potato salads from other parts of Germany are often served cold and/or include mayonnaise. The latter is not unlike the typical North American versions.

The descriptors “warm” or “hot” aren’t used in Germany at all. The temperature simply comes from the fact that you’re working with freshly cooked potatoes and hot broth. You serve it fairly soon after it’s made and therefore it’s warm, or hot, depending on how quickly you work with the boiled potatoes.

Despite all this, I am still calling the recipe “German” and not “Bavarian”, or even simply “potato salad” because, well, it’s just seems easier in the long run.

After World War II the Americans were stationed in Southern Germany until the nineties. It’s through these Americans coming back to the US with German recipes they were familiar with that Bavaria’s potato salad is now widely known as “German Potato Salad” in the States. 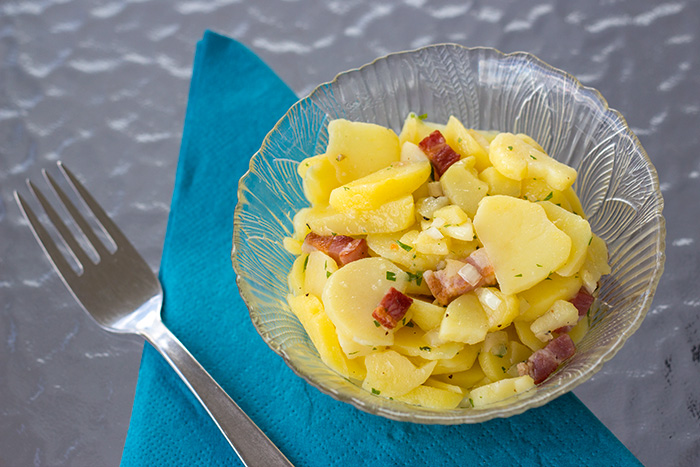 This recipe yields enough for about 2 – 3 people.

You’ll have to excuse me since these photos aren’t the best. The kitchen work area here is tiny and we have what my American sensibilities deem to be an unusual style of counter top. I’ll also admit that I wasn’t really thinking about diffusing the sunlight until after we finished. Oof, this travel food blogging definitely requires a little more practice and planning on my part! 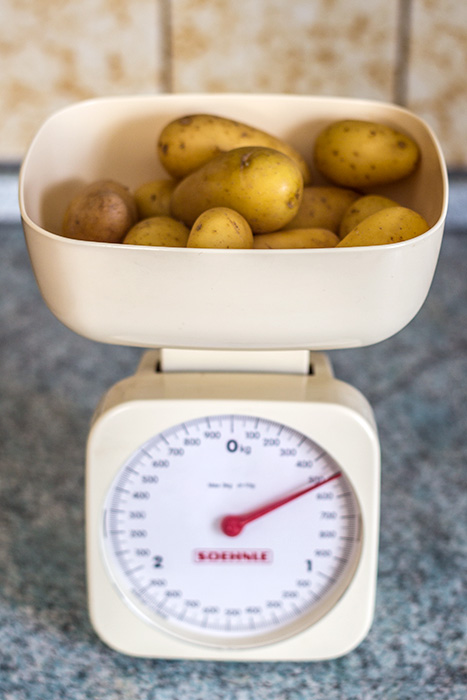 We start with 1 pound (or 500 grams as the scale is telling us) of small, yellow potatoes. 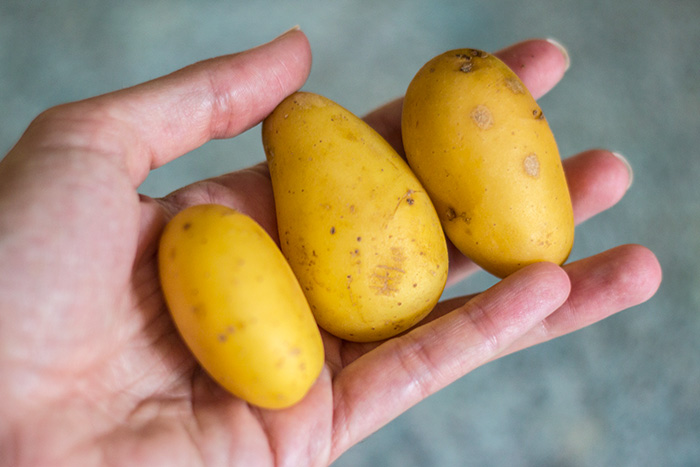 Here’s a better idea of how small they really are. Don’t sweat it if you can’t get potatoes this small. Just go with what you can find.

In Europe, potatoes are often classified by their name or type, rather than just their colour. These little spuds are Drillinge, according to their packaging. Actually, this list here will give you an idea of how many potato types that can be found Germany. Kind of mind boggling when all I see at the grocery store is “red, white or yellow” stateside. Though, russets do seem get their own section. 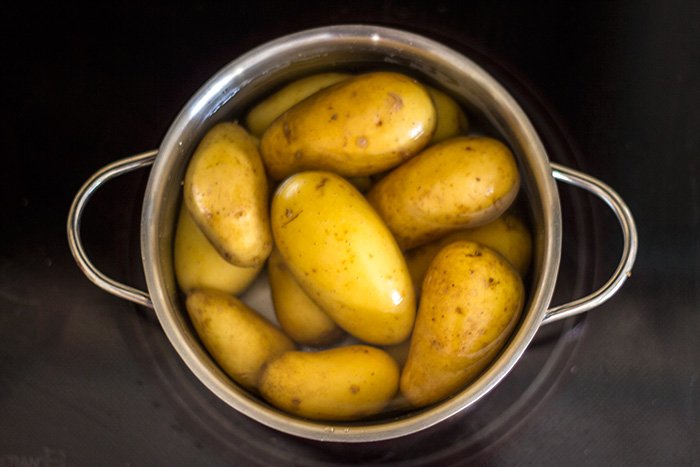 Boil your potatoes until they’re done but not too soft. We’re cutting, not mashing. Ours were boiled for about 12 minutes. Set them aside until they’re cool enough to handle but definitely still warm.

Here’s my post about boiling potatoes with their skins on, also known as Pellkartoffeln, if anyone needs more info. 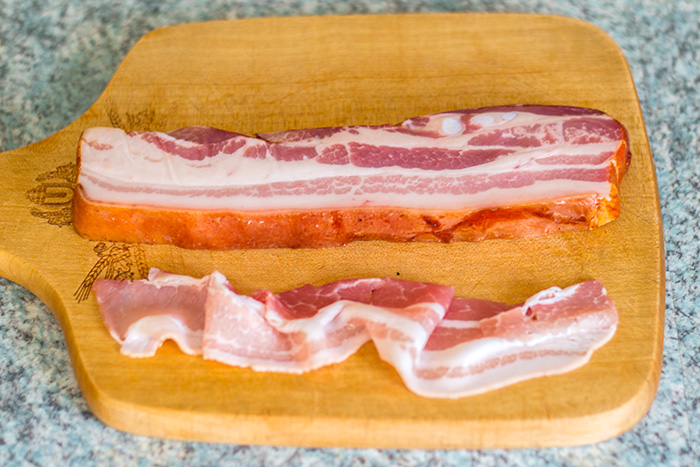 This picture here is just to show you the difference between bacon and speck (also known as bauchspeck). Speck is basically pork belly that’s been smoked with beech wood.

We’re using the speck because, well, why wouldn’t you when you’re in Germany?  But bacon certainly does the job as well, so no worries there. 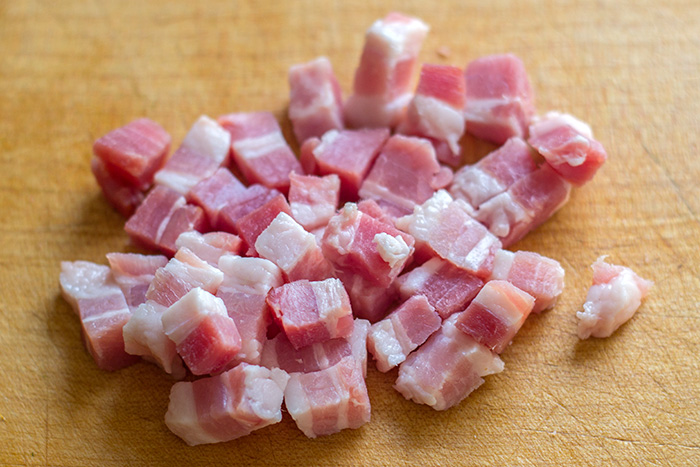 For bacon – Cook/fry until almost crispy and then cut into small pieces once it’s cooled off. Set aside. 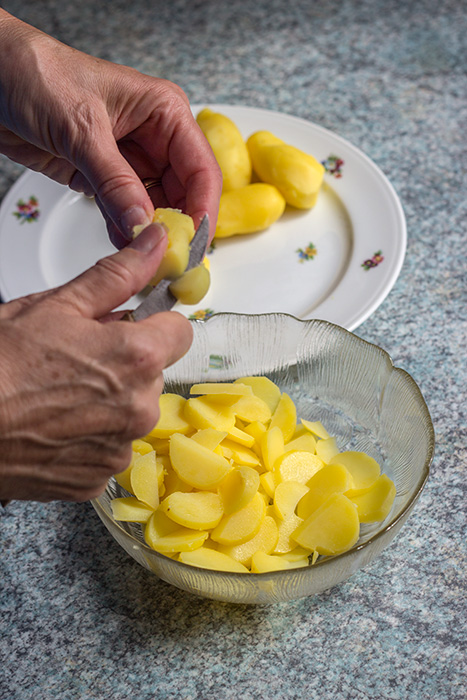 Once those potatoes have cooled a little, peel them and start slicing them into pieces.

We call this “schnibbling” in my household. Schnibble means to “a small piece or to cut small” and I believed it’s used primarily in areas with lot of German ancestry, like in the Midwest or the Pennsylvania Dutch. The word likely comes from the German word schnippel, which means bits and pieces, cuttings, etc.

Now you have a word for those little pieces of paper leftover from making a snowflake!

Back to our potato salad lesson… 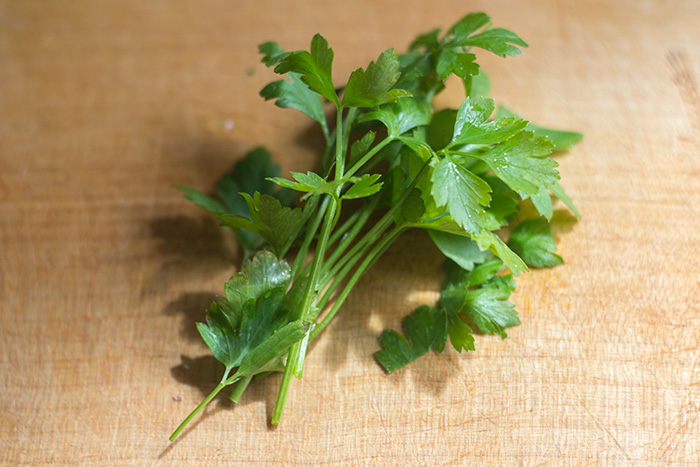 A small amount of flat leaf parsley comes next. 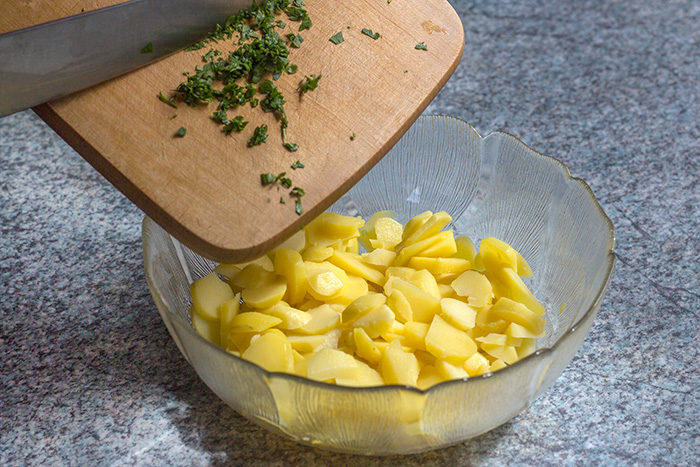 Chop small and add it to your bowl of schibbled potatoes. 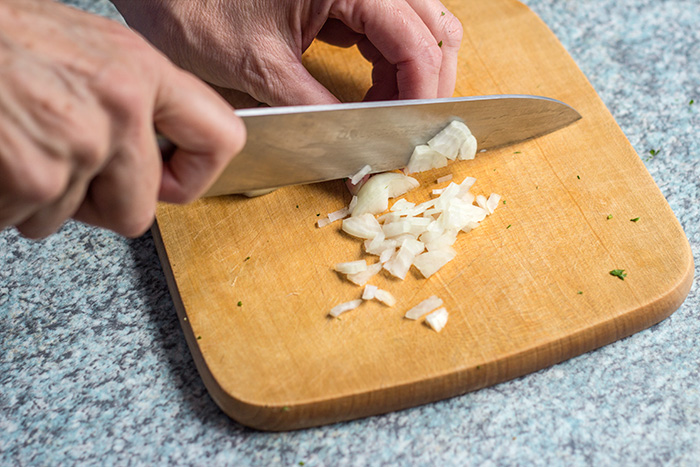 On average, German onions seem to be pretty small. You’ll likely end up with more onion than this but that never hurt anyone. Unless, of course, you’re not an onion fan. 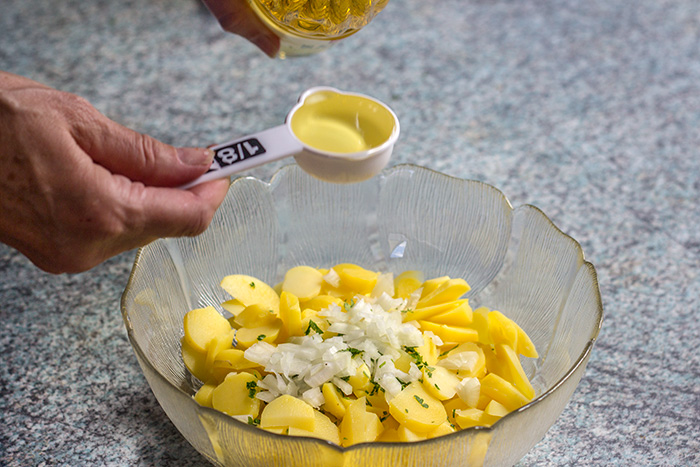 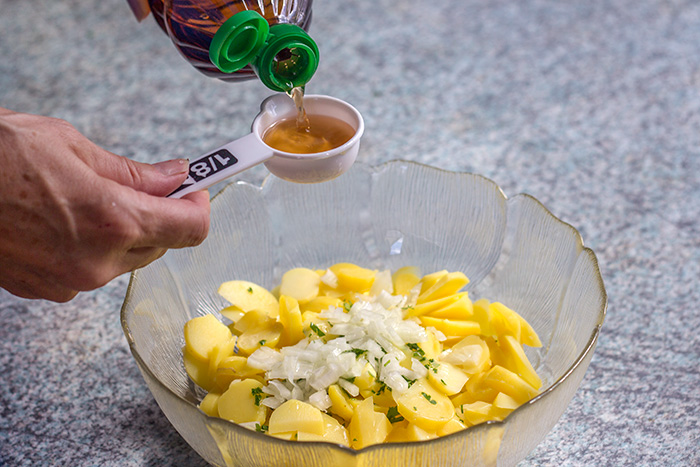 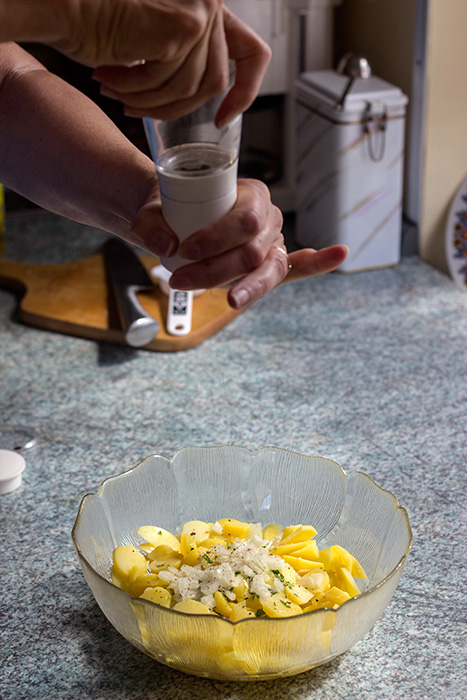 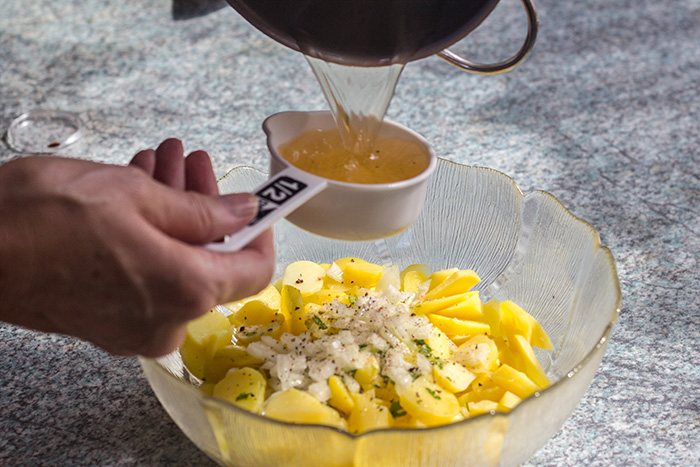 And the last thing is the 1/2 cup of vegetable broth. 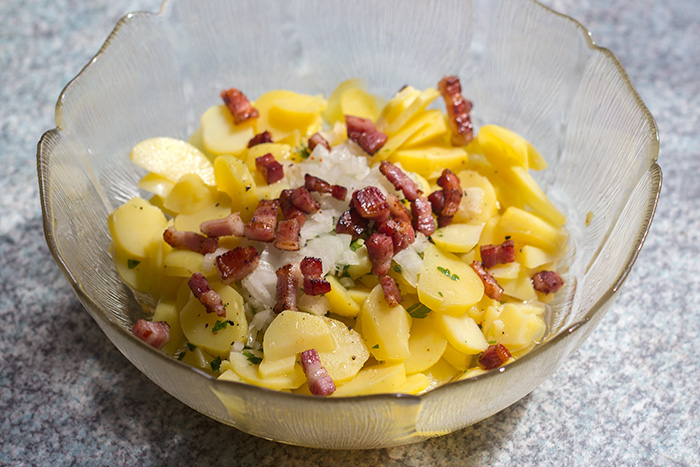 Oops, wait, let’s not forget that bacon (or speck) we cut up earlier. 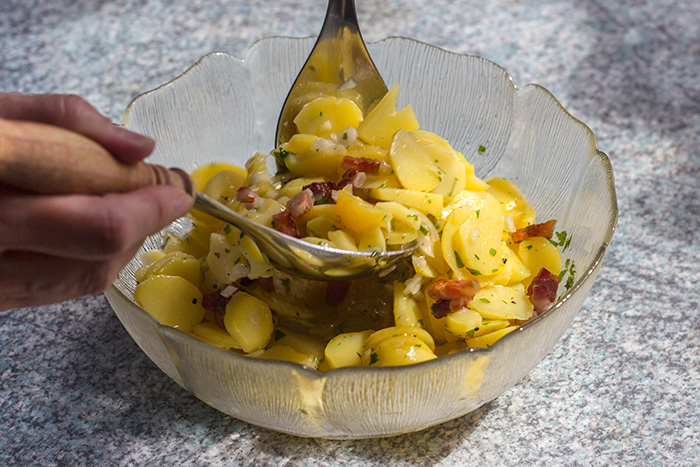 Give it a nice toss with your salad tongs and we’re done!

Really quite easy, right? Most of the work comes from peeling all those potatoes. 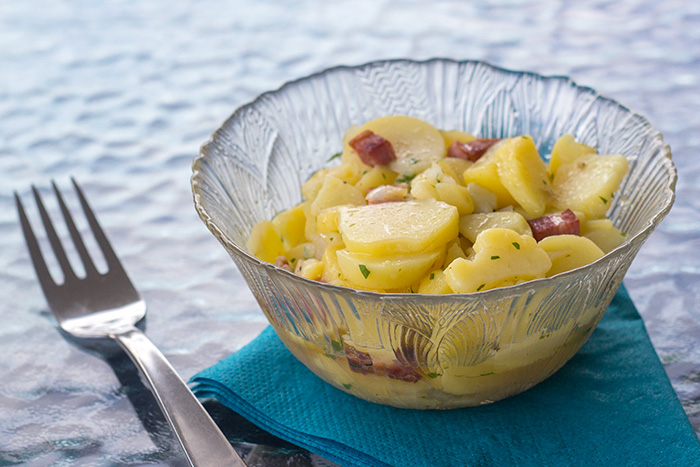 Serve it immediately for a nice warm side dish that goes with more things that I can count. Germans do love it with some sort of meat dish. 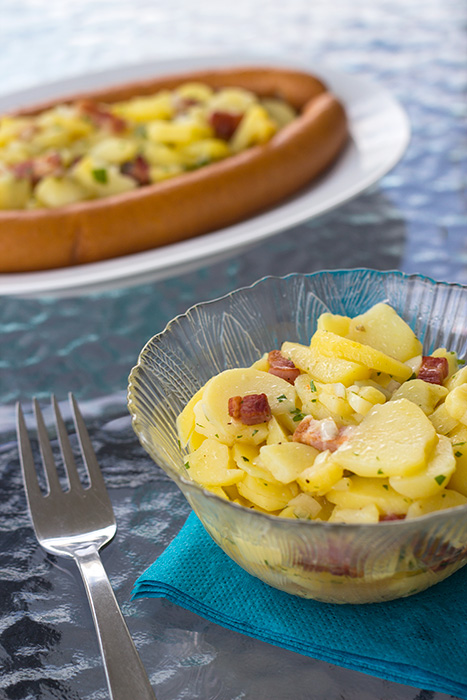 You can use this German potato salad wherever you would normally have a potato salad. My folks makes this almost every time we have a picnic. It’s, of course, a great accompaniment to kinder schnitzel or sausages – any sausages, really, but especially wieners or bratwurst.

Let me know what you like to eat with your Kartoffelsalat in the comments below. 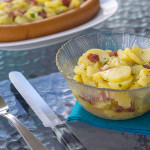 A warm and tangy potato salad that will have you remembering your German roots. Enjoy with schnitzel, sausages or your favourite burger.
Total Time 40 minutes
Servings 3

Even though it's served hot, it's equally as good cold. Makes great leftovers.